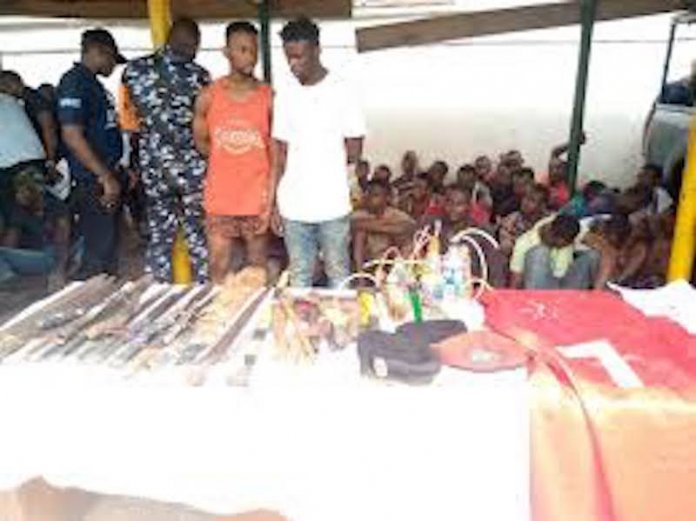 Cultism is one of the social ills that has bedeviled our society for quite some time. It has become so bad that primary schools’ pupils are reportedly getting initiated into the evil practice. Cultism has brought nothing but pains and anguish to affected individuals.

Across the country, it is not unusual to hear news of deadly cult wars that left in its trails wanton destruction of property and sometimes lives. Such attacks do not portray our society in a positive light. Since development only thrives in a peaceful and conducive environment, the dastardly activities of these cult warriors not only impede development, they also depict our society in bad light.

The predominance of cultism in higher institutions across the country has become alarming and it has caused a lot of damage ranging from destruction of academic calendars, loss of lives and property, unsafe and inhabitable environment within and sometimes outside the school’s vicinity.

Severally, the government has tried to clamp down on their activities by publicly creating awareness of the ills created by the groups in the society and even as far as publicizing the punishment meted to victims when apprehended. Sadly, cultism has gone beyond the four walls of tertiary institutions as it has crept into other sectors of the society.

Being the nation’s commercial and economic nerve centre, Lagos has had its own fair share of shameless cult battles. In places such as Ikorodu, Somolu, Bariga, Mushin and Ojota among others, activities of cultists have become a source of worries to the citizens.

In a bid to frontally tackle the evil of cultism in the state, Governor Babajide Sanwo-Olu recently signed the bill for the Prohibition of Unlawful Societies and Cultism of 2021 into law, approving a 21-year jail term for convicted cultists in the state.

The anti-cultism law repeals the Cultism (Prohibition) Law of 2007 (now Cap. C18, Laws of Lagos State of Nigeria, 2015) and provides for more stringent punitive measures, as well as makes its application all-encompassing and applicable to the general public, as against the restriction of the previous law to students of tertiary institutions.

Sanwo-Olu said the state had suffered the negative effects of unlawful societies and cultism, stressing that the new law sought to make parents more responsible and show more interest in the up-bringing of their children and wards to ensure that they do not become a burden to the society.

He said the new law sought to make parents show more interests in the upbringing of their children and wards to ensure they did not become a burden to society.

The State House of Assembly, in February, passed the anti-cultism bill, which stipulated a 15-year jail term for anyone found guilty of abetting cultists and residents who willfully allowed their property to be used as meeting points by cultists.

The anti-cultism law also made its application all-encompassing and applicable to the general public, as against the restriction of the previous law to students of tertiary institutions.

The passing of the new Law by the State House of Assembly as well as the speedy ascent to same by Mr. Governor, no doubt, underscores the government’s resolve to bluntly address the evil of cultism in the state.

It, however, needs to be emphasised that for the new Law to achieve its mission, which is the elimination of cultism in the state, every stakeholder must be on the same page with the government. No matter how good the plans of the government for the citizenry are, if the government does not get sufficient buy-in from the people such will amount to nothing.

Therefore, the society must collectively rise up against every habit or practice that makes cultism thrive in our society. Of course, one of such is drug abuse. It is rather worrisome that drug abusers are mostly youth. This should be a source of great concern to everyone. This is why the pro – health campaign in Lagos State is very strong with usage of multi-sectoral approach and collaborative and synergetic efforts of many MDAs.

Commendably, Lagos State has established a drug-free club and included drug abuse in its school curriculum to target the school pupils/students. The Lagos State anti-drug war has always attracted support from NDLEA and private sectors with organizations like Emzor Pharmaceuticals Ltd as reliable allies.

Parents and guardians are enjoined to pay close attention to their children. Since every person in the society is first and foremost a product of a home, the role of parents in stemming the tide of the evil of cultism and other such vices in the society cannot be overemphasised.