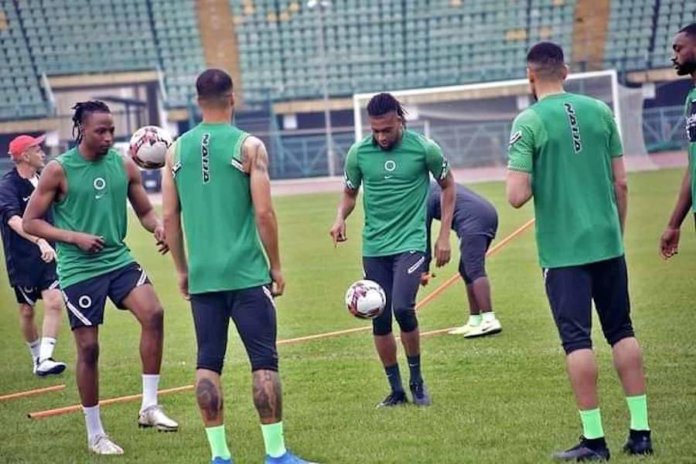 As the countdown for the final round of qualification matches for the 2021 Africa Cup of Nations begins, Super Eagles camp in Lagos has come alive with all the invited players.

Except for Leicester City’s Kelechi Iheanacho who was being expected as at press time last night, all the invited players participated in the evening training session at the Teslim Balogun Stadium in Lagos.

Speaking shortly after the session, Eagles Head Coach, Gernot Rohr said his wards will approach Saturday’s clash with Benin Republic with the intention of picking all three points.

“We are keen to restore a winning mentality to the group ahead of very crucial matches that we have ahead. It is important that we earn victories in the upcoming matches so that we get into our paces for the FIFA World Cup qualifiers. There will be tough games to come and we need to be rearing to go,” observed the Franco-German gaffer in apparent reference to Nigeria’s draw matches at home and away to Sierra Leone last November.

Despite the initial scare European clubs were not going to release African players (including Super Eagles) for the AFCON 2021 qualifiers due to the Covid-19 quarantine protocols in place, Rohr insisted that he had a Plan B to survive the situation if it had occurred.

This, perhaps, explains why three players from the domestic league were drafted to the team belatedly.

The arrival of Napoli forward, Victor Osimhen and Samuel Chukwueze of Villarreal of Spain was a huge boost to the team as non-playing Captain, Ahmed Musa, confirmed that Super Eagles were set to go to Port Novo to demolish the Squirrels.

“We are ready to make up and banish the disappointment of the last matches and the best way is for every one of us to push further up in the two coming matches but for now, it’s the away match that is uppermost and we want all Nigerians to come behind us,” Ahmed Musa emphasized.

“Playing in Lagos, we were told is a special moment considering the fact that it was traditional home of the national team and if I’m selected it will be a special moment for me and most of my teammates,” Aribo promised.

Meanwhile, the Super Eagles will travel by waterways to Porto Novo on Friday morning, and will stay the night in the Beninoise capital, Cotonou, before moving to Porto Novo on Saturday for the game. The contingent will return to Cotonou after the game and travel back to Lagos on Sunday morning.

Nigeria top their group with eight points, one better than the Squirrels of Benin Republic, against whom they trade tackles at the Stade Charles de Gaulle in Porto Novo on Saturday.

Three days later, the Eagles will confront the Crocodiles of Lesotho at the Teslim Balogun Stadium, Lagos in what will be their first encounter in Nigeria’s commercial and economic capital in 10 years.