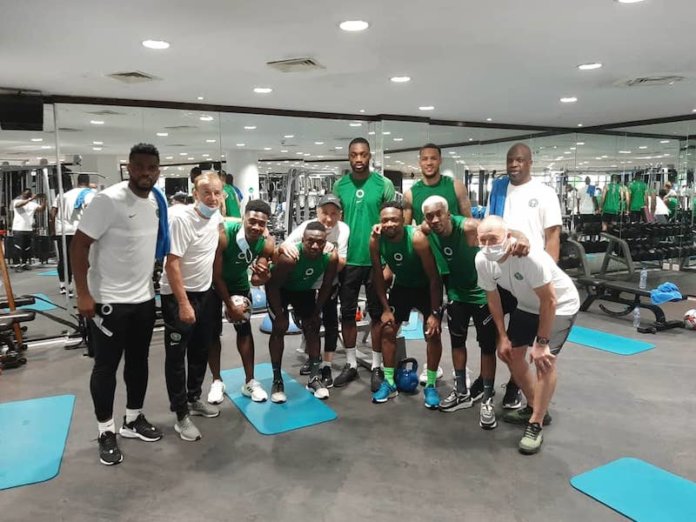 *18 players in camp last night with arrival of Iwobi, Onuachu, others

Super Eagles are expected to begin proper training this evening at the Teslim Balogun Stadium mainbowl when all invited players for the AFCON 2021 qualifiers against Benin Republic and Lesotho would have arrived the team’s Eko Hotel camp in Lagos.

The few that arrived the camp on Sunday evening were involved in workout in the well-equipped gym of the hotel yesterday morning. They included: William Troost-Ekong, captain Ahmed Musa, Ola Aina, Henry Onyekuru, Oghenekaro Etebo and Shehu Abdullahi.

Media Officer of the team, Babafemi Raji, confirmed yesterday that Tuesday evening training at Teslim Balogun would begin at 4.30pm.

Enyimba’s duo of Noble and Iwuala completed the 18 players in Eagles camp as at press time last night.

Meanwhile, Head Coach of the Super Eagles further extended invites to two home-based players in place of those not released by their teams or injured for Nigeria’s games with Benin and Lesotho.

Enyimba’s goalkeeper, John Noble was the only player from the domestic league included in his 24-man rooster before spate of withdrawals have now forced him to extend invites to two more players from the home front.

Currently topping the AFCON qualifiers Group L with eight points, one point ahead of closest rivals Benin, the Super Eagles will be away to face the Squirrels at Stade Charles de Gaulle in Porto Novo on 27th March, before concluding their campaign three days later against visiting Lesotho Crocodiles at Teslim Balogun Stadium, in what would be their first official game in Lagos in a decade.

The last competitive game Nigeria played in Lagos was a 1-0 AFCON qualifiers’ win over Zambia in January 2001.

Speaking on the expectations from his wards, Rohr insisted yesterday that the two matches are important to Super Eagles despite the FIFA rankings of both countries.

“We want to finish our qualification on a positive note, and the two matches against Benin and Lesotho are very important,” Rohr told CAFOnline.com.

“Of course, we know that Benin is difficult to beat after our last game in Uyo (Nigeria won 2-1) and we need at least a point against them to qualify for next year’s AFCON,” added the 67 years old coach.

“Then, we are playing our final game in Lagos. We want to win in Lagos because it has been a long time since we last played there, and we want to conclude the qualifiers with a victory as well.

“These are not going to be easy matches because Lesotho drew with Benin, but we are going to give our best against these opponents,” noted the former Bayern Munich defender.

He admitted that despite Ahmed Musa’s presence in the camp, he is not listed to play the two games due to his inactivities at the moment.

“Musa is our captain, and he is a part of the team though he won’t play because he has not been active, but we want to assist him to train and he will also help our team as we prepare for these two important matches,” concluded Rohr.