Governor Abdullahi Ganduje of Kano state has disclosed that his colleagues are worried about last weekend’s attempt on the life of Benue state governor, Samuel Ortom.

Ganduje, who addressed newsmen Monday after a closed-door meeting with President Muhammadu Buhari at the State House, Abuja, however, submitted that the nation will soon overcome the kilings and attacks associated with the security challenges across the country.

Describing the attack on Ortom as unfortunate, the governor wondered if a state chief executive with security compliments could be brazenly attacked, what becomes of an ordinary citizen on the street.

He expressed hope that with the new service chiefs settling down after their appointment, security issues will definitely change for the better.

His words: The attack is unfortunate, but I believe with appointment of new service chiefs, new strategy will be developed and I think Mr. President has always been serious on this issue, but is rather unfortunate.

Not only governors are being attacked, anybody who is attacked in Nigeria, one should be worried because life is life. Certainly we’re worried because a governor is supposed to have some security with him, let alone an ordinary man who has no security. So you can see how serious the situation is but we believe we will come over it”.

Ganduje also stated that his administration had put necessary security measures in place which made Kano as the most peaceful state in the federation.

He said: “All what I know as of today, Kano is the most peaceful state in the federation and this is not by chance, there must be some security measures that we have taken, like full cooperation among the security agencies in Kano State. We introduced the command and control centre; the CCTV where we are viewing the whole Metropolitan Kano, we have the most powerful tracker vehicle, equipment in Kano.

“Falgore Forest where bandits usually inhabit, we said no, not in Kano State. We established a military training ground in Falgore Forest and therefore bandits cannot inhabit it. Our border with Kaduna, we have a forest and where we are establishing Rural Grazing Area (RUGA) programme, we discussed with nomadic Fulani, they agreed to be settled there. In fact, other Fulani are even coming”.

According to him, “we also established a security training institute where we are training our young men and women for community policing, even yesterday, we graduated 200, while 500 are undergoing training there, with the advice of the security agencies in Kano. So all these efforts are in order to keep Kano in the peace.”

He also announced that the state in a bid to decongest traffic in Kano metropolis plans to build a N9billion three level road interchange along Kano-Maiduguri Road with a completion period of 18 months.

Ganduje said he came to show President Buhari the prototype design of the road which will be named after him upon completion adding that funds to execute the road project will be sourced from the Internally Generated Revenue (IGR) of the state.

“We revised the master plan of Kano state and all those areas where we have holdups we either build underpass or we build a bridge, and now we have resorted to putting the three together in one place; that is flyover, bridge, and underpass, all at one point so that there’ll not be any traffic jam”. 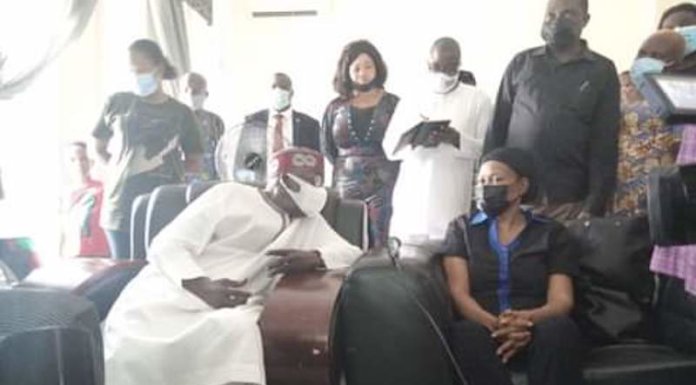