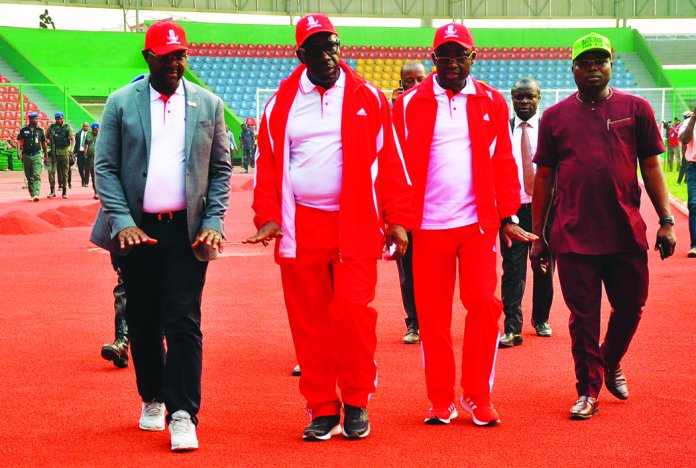 The much postponed Edo National Sports Festival will go ahead as planned from April 2- 14 with 8,000 atheletes taking part, Minister of Youth and sports Development Sunday Dare has assured.

Speaking in Benin yesterday after undergoing a tour of facilities and a meeting with Edo State Governor Godwin Obaseki, Dare said “On April 2, the camp for the Edo Festival would be opened, on April 6 the official opening of the festival by Mr President would take place. But beyond that, we are also working closely with the PTF, NCDC and others to ensure that the necessary support we need in terms of vaccination of atheletes, test kits will be available. We are also toning down the number of athletes that would be participating from 14,000 to 8,000. I must thank the governor and his deputy for taking the lead on this”

On accomodation of athletes, he said: “We have been able to get the University of Benin to host our athletes. There are still some works to be done here which may not be in the radar, but everything is on track I can tell you with certainty that the Edo National Sports Festival will hold.

“After meeting with the Governor, Godwin Obaseki, his Deputy Comrade Philip Shuaibu, we are reassured that we are on track to host a successful National Sports Festival. All obstacles have been cleared; we are ready for a great festival. The event is coming at the most auspicious time when we are preparing for the Olympics.This is our local Olympics and we shall make the most of it.The President has given his nod for the festival to take place, there’s no going back”
The Festival billed for last year was postponed due to the outbreakof Covid-19.