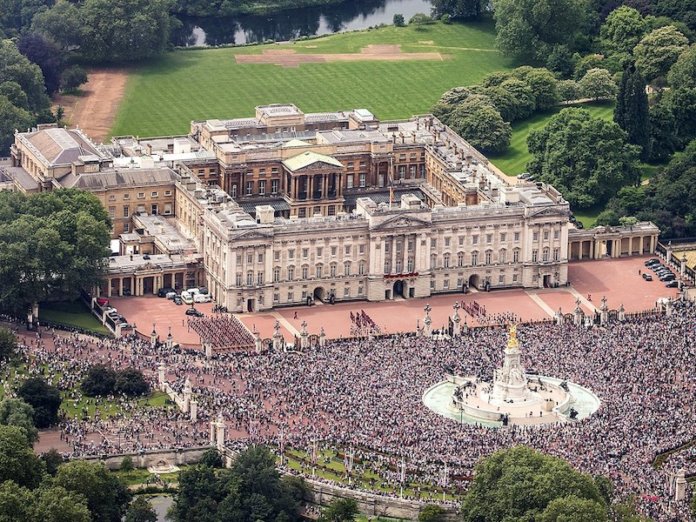 Buckingham Palace, the official residence of the iconic Queen of England, is a monument that bears testimony to the rich and enduring monarchical tradition of the English.

A symbol of power, opulence and aristocratic grandeur, Buckingham Palace has 775 rooms. Of these, 188 are staff bedrooms, 92 offices, 78 bathrooms, 52 royal and guest bedrooms, and 19 state rooms. In total, the Palace grounds spans over 39 acres.

While Queen Elizabeth famously calls the palace her home, Princes Phillip, Andrew, and Edward all reside there as well, along with a lot of the royal family’s staff members. It is a testimony to the resilience of the palace that over the course of World War 2, it survived nine German bomb attacks.

However, a major ‘war’ that will, no doubt, ruffle the much talked about Buckingham Palace pliability is brewing. Are you already thinking of a fighter jet flying over the palace? No! Don’t just go there. The war in question is more psychological and emotional in nature. It is about a family fighting against each other.

It could be referred to as a battle between tradition and modernisation. Prince Harry, the disenchanted son of the late Princess Diana, seems at ‘war’ with the palace and all it represents. He has perceptibly demonstrated this in so many ways.

First, his choice of a marital partner is obviously at variance with the palace’s expectation. Second, he and his wife decided to excuse themselves from royal activities, choosing, instead, a private life. Third, they chose to live farther away from the palace by relocating to the United States. Fourth, the duo, Harry and Meghan, recently launched a lethal attack on the palace, alleging, in a widely viewed interview with Oprah Winfrey, unfair treatment from the palace.

Meghan said the royal family declined to make the couple’s son, Archie, a prince or to offer him the protection that would come with that title. She also said someone in the family expressed concern to Harry about what the baby’s skin color would be. Harry declined to say who had expressed those concerns, but he has said it was neither his grandfather Prince Philip nor the Queen.

Other major revelations from the interview include that the royal family informed the couple that their security detail would be ended after they stepped back from royal duties and moved abroad. The couple also disclosed that their home address in Canada had been revealed by The Daily Mail, making them concerned for their safety and resulting in their move to California.

Meghan also revealed that her experience in the family was so unbearable she had considered taking her own life. Harry told Winfrey that he felt “trapped” within the system of the royal family, and said the family had failed to stick up for them when Meghan was suffering racist harassment from British media and members of the public.

Curiously, the interview drew parallels with a 1995 BBC interview with Harry’s late mother, Princess Diana, whose marriage to Prince Charles ended in divorce.

Meghan is an African-American, who because of her mixed background, looks more white than black. She is convinced she was not fully accepted into the royal family. The Oprah interview shows that the couple is sad about their circumstances.

Expectedly, the palace responded to the explosive allegations, saying that the “whole family is saddened” by how “challenging” the previous years have been for the royal couple. It added that the allegations of racism are “concerning” and will be “addressed by the family privately.”

Sadly, the whole episode has further alienated Harry from his family. He is no longer at peace with his brother, Prince William, his father and grandparents. That is a burden he will have to carry for a long time. It is the burden of love. He has decided to choose love over family, and he must be ready to live by the consequences of that choice.

Meanwhile, in as much as the authenticity of the couple’s racial claim is yet to be clearly ascertained, it is important to stress that it would be highly incongruous and pathetic if it is true that racism actually exists in the highly revered palace. Remember that the Queen of England is the official Head of the Commonwealth?

According to the late American civil rights activist, Martin Luther King Jnr., three major evils exist in the world. These, he said, are the evil of racism, the evil of poverty, and the evil of war.

In contemporary context, it would be a blunder to assume that racism no longer exists in our world. The death of George Floyd drew widespread outrage last May, after a video circulated online showing Officer Derek Chawin holding his knee on the late musician’s neck as he gasped for breath, appropriately validating the shocking existence of racism in our world.