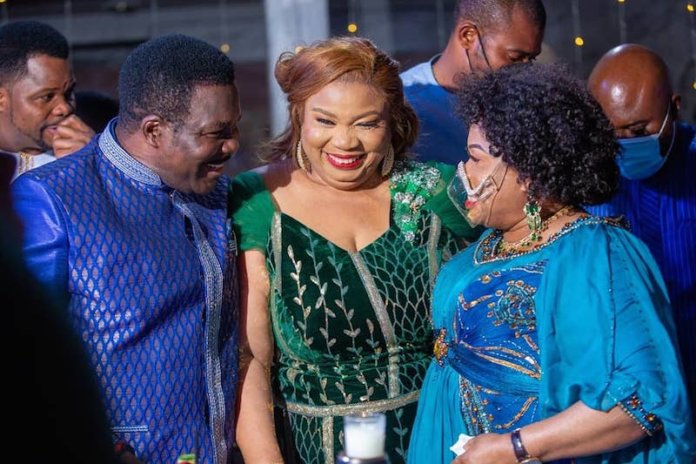 Seeing the merriment and jubilation with which the family of Mike Ozekhome celebrated the 50th birthday of their matriarch, Lady Josephine Ozekhome, makes one wonder if Tolstoy was right to say that happy families are all alike.

It does not at all seem like there is a Nigerian family happier than the Ozekhomes. The birthday ceremony was organised by the Senior Advocate of Nigeria himself, Mike Ozekhome. Held at his Chambers in Abuja, the event played host to several prominent figures, all of whom sang songs and tirelessly applauded the celebrant.

Among the guests were former Nigerian First Lady, Dame Patience Jonathan, popular Kogi senator Dino Melaye, and several others. Unsurprisingly, Dame Patience won the special guest seat on account of her age-long friendship with the Ozekhomes.

The celebrant, Lady Josephine, was all smiles throughout the event, with her husband occasionally taking her hand. Of course, her radiance reached the heart of all and sundry, and so guests unhesitatingly got out of their chairs to wish the pride of the Ozekhome family a happy golden 50, many happy returns, long life, and prosperity. To be paid such grand tributes by so many grand characters is an honour that few deserve. But Lady Josephine numbers among this few, and so she took it all in stride, grateful, charming – the perfect host.

Those who know the Ozekhomes know that although Mike is a mover and shaker in Nigerian society, his wife is the judge and jury of their happy home. Reported to have been (traditionally) joined together in marital bliss in 1991, their relationship’s flame burns brighter and brighter. Neither the husband’s legal Brobdingnagian stature nor the birth of their six children has threatened the flame. Some people really are meant together, and after 30 years together, her family is one reason Josephine Ozekhome insists on the presence of God’s grace in her life. A blessed woman and a blessed family indeed.