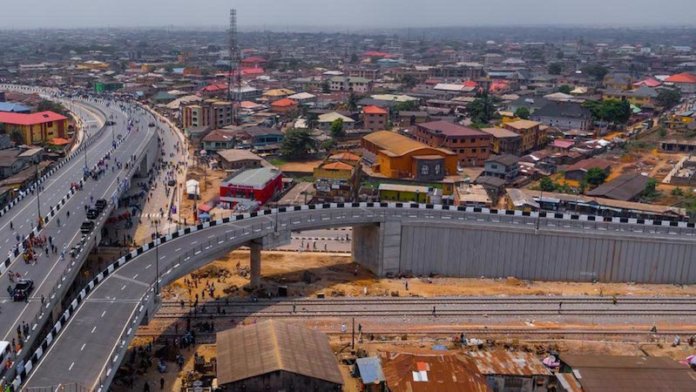 On Friday, March 5, 2021, it was the turn of Agege, a town renowned for trade and commerce, to welcome the ‘Greater Lagos’ train of the Babajide Olusola Sanwo-Olu administration as a new dawn was heralded in the town.

On that day, the long-sought relief from choking vehicular gridlocks finally came the way of residents in the axis as Governor Sanwo-Olu inaugurated the Pen Cinema Bridge and five major road networks in the area.
Former Governor of Lagos State, Asiwaju Bola Ahmed Tinubu, who was a special guest at the event, described the project as “needed catalyst” for the resuscitation of economic activities on the axis.

The construction of the 1.4-kilometre long flyover was part of the recommendation at the Lagos Economic Summit (Ehingbeti) under ex-Governor Babatunde Fashola’s administration, as a strategic intervention to achieving significant traffic improvement in the densely populated area. The last administration created the right-of-way and set up the structural beams while the Sanwo-Olu administration substantially completed 80% of civil works on the bridge.

The imposing overpass ascends from Oba Ogunji Road and drops at Oke Koto area of Agege. The bridge also opens to the old Lagos-Abeokuta Expressway through Abule Egba. The axis, on which the flyover is sited, is one of the busiest in vehicular activities in Lagos. Therefore, with the coming of the bridge, huge relief would come to commuters, businessmen and others along the area.

The entire project consists of a dual carriageway, with a bridge component of two lanes with 3.65 cm width in either direction. The road component consists of service lanes on either side of the bridge with median, kerbs and walkways that are complete with signalised traffic system. There are junction improvements with LED streetlight features.

Governor Sanwo-Olu rightly described the delivery of the project as a “landmark progress” in the state’s drive towards eliminating bottlenecks causing suffocating gridlocks and relieving residents of stress associated with commuting on roads. Sanwo-Olu said the two-pronged approach, which his administration deployed to deliver critical infrastructure, gave priority to continuation and completion of strategic projects, regular maintenance and construction of new ones in line with the State’s Strategic Transport Master Plan (STMP).

He said his government decided to continue the project, because it was in tune with the first pillar of his administration’s T.H.E.M.E.S Agenda, which targets the provision of roads for expedited economic growth and seamless mobility.

With the delivery of the Bridge, which is complemented with traffic signalisation and drainage channels, the perennial traffic arising from huge human and vehicular movement from Agege-Pen Cinema Intersection towards Abule Egba, Fagba, Oke Koto and Iyana Ipaja has finally been resolved.
To achieve a quick turnaround in commuting on the Bridge, the government identified and reconstructed five strategic principal roads with good connectivity to adjoining roads that could serve as alternative bypasses to other routes in periods of heavy traffic.

Considering the centrality of road transportation to economic growth and physical development, the project would inject more life into socio-economic activities of people living and doing business in the area.
A key outcome from the strategic execution of the Pen Cinema Flyover project is that the Sanwo-Olu administration has again demonstrated the priority it accords to the well-being of the citizenry. It is, no doubt, a true test of the current administration’s commitment to the ‘Greater Lagos’ vision and a reflection of the achievability of its audacious socio-economic goals.

It needs to be stressed that while implementing the project, the government directly and indirectly created jobs for over 1000 people including engineers, supervisors, artisans and others. This is a clear indicator of the nexus between infrastructure development and employment generation.

The construction of the fly-over become inevitable, considering the importance of the road corridor and the critical congestion the area was known for. There are intersections that lead to Oshodi and back to Lagos-Abeokuta Old Express Road. Also, there is another that leads to Ikeja for motorists, especially for motorists going to Alausa, Agidingbi, Ogba either from Alimosho axis or Sango-Ijoko.
There also exists another intersection for those going to Iju-Ishaga, etc. In essence, the Pen-Cinema Road corridor is essential for Lagosians, especially motorists plying the Lagos-Abeokuta Road either going to Ikeja, Oshodi, Mushin from areas like Ifako-Ijaiye, Alimosho, Sango-Ijoko axis.

It is absolutely fascinating that the current administration has completed the Pen-Cinema Bridge in record time. The governor, his deputy and some of his cabinet members have consistently toured the project since assumption of office. This mirrors the commitment of the administration to the project, which will, no doubt, change the skyline of the area and ease the perennial traffic gridlock.

From the onset, the Pen-Cinema Bridge started with the construction of alternative routes for traffic diversion and ease of vehicular movement especially when the intersections were closed

When the completion and inauguration of the bridge is taken into cognizance, together with road improvement projects in several other sites across the State such as Agric-Ishawo, Igbogbo-Bola Ahmed Tinubu-Igbe Road, Ikorodu, completed network of roads in Ojokoro, Oniru, Victoria Island and several inner roads, it is only trite for the discerning minds to commend the Sanwo-Olu administration.

A prime test of democracy in developing nations is how to connect the government with the governed. In Lagos State, Governor Sanwo-Olu has been able to creatively connect with the people through his systematic programme of improving infrastructure in the state. Today, it is clear to all that Lagos is undergoing a major infrastructure regeneration process. It is there for all to see and it is for the common good of all.

However, for Lagosians to continue to enjoy the fruits of innovative governance currently on display in the state, they must be ready to play their part, especially as it relates to voluntary payment of tax, protection of public infrastructure, environmental cleanliness as well as maintenance of law and order.
––Tayo Ogunbiyi is Deputy Director, Public Affairs, Ministry of Information and Strategy, Alausa