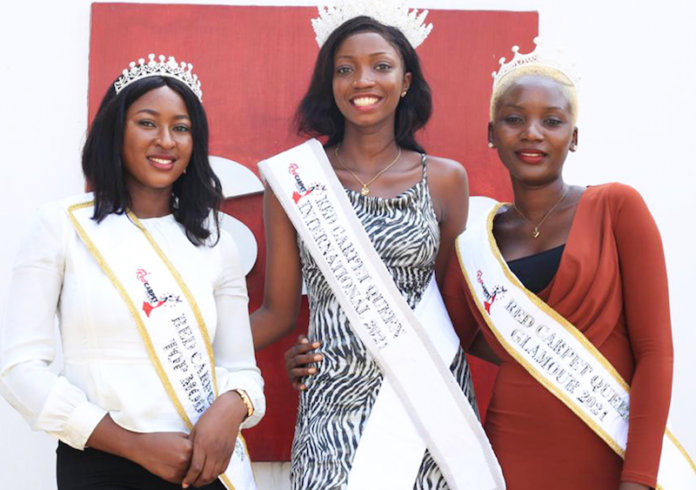 The Red Carpet Queen International Reality TV Pageant has announced winners of the season two edition of the pageant where winners were graciously rewarded for their display of excellence.

The season two edition of the pageant followed the success of the 2020 lockdown edition themed: “Making a statement,” which ever since the Pageant has grown in leaps and bound and strengthening its purpose of raising the next generation of accomplished career models and TV presenters amongst others.

The three winners emerged from the over 150 selected for the first round of the competition that as held online, out of which 10 finalists made it to the adventure house.

The overall winner walked away with a million Naira cash prize as well as $5000 worth Skincare formulation scholarship sponsored by COC Beauty School. The 1st and 2nd Runner ups were presented cash consolation prizes and equally got a $5000 worth Skincare formulation scholarship. In addition, the three winners will be sponsored on a trip to Dubai for a one week luxury vacation during summer.

The contestants were able to treat viewers to super sensational and exhilarating moments of drama, suspense and more. The 2021 edition of the contest took a different curve as it had in attendance live audiences from the ex-contestanta and others, given priority COVID-19 protocols.

According to the organisation, the just concluded season two, tagged “The Adventure”, was inspired by its burning desires to break limits and avail a lifetime opportunity to the contestants to explore their survival abilities as an experience they can deploy into their career life to become accomplished in respective fields of endeavours.

The pageant was packaged by Red Carpet On TV Media and sponsored by Kubeconcepts, COC Beauty School and Phamatex Industries Limited, amongst others.