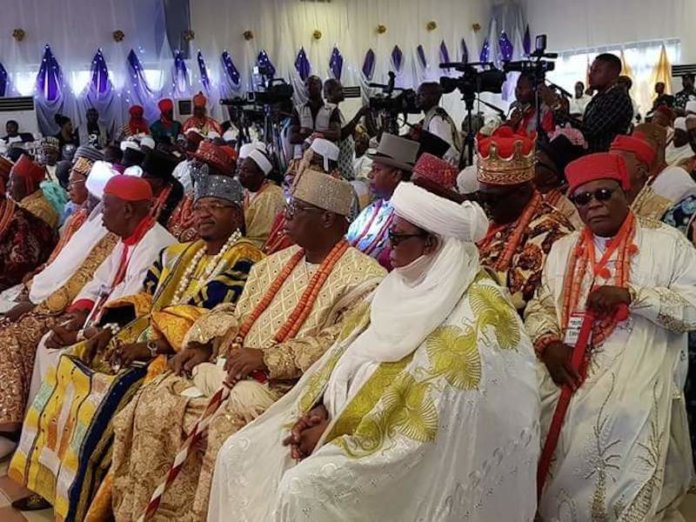 The National Traditional Council of Nigeria has called on the National Assembly Joint Committee on the review of the 1999 constitution to ensure a constitutional provision is made with a view to creating roles for traditional rulers in matters involving religion, culture, security, justice and other ancillary matters.

The council also accused the regimes of Gen. Aguiyi Ironsi, Gen. Yakubu Gowon and Gen. Olusegun Obasanjo of relegating the traditional institution to the background with no constitutional role.

According to him, before the 1976 local government reforms, which stripped traditional rulers of their powers, Nigeria was at that time progressive, peaceful, decent and full of beautiful traditions and cultures.

The traditional rulers’ stand was contained in a memorandum presented Thursday before the Senate Constitution Review Committee by the Chairman, Coordinating Committee of the Council and Etsu Nupe, Alhaji Yahaya Abubakar, who represented the Sultan.

The Council blamed the government for neglecting the powers of the traditional rulers which they said would’ve helped to douse conflicts and ensure criminals have no hiding place.

The memo said: ”Currently, traditional rulers do not have the constitutional or other legal backings to perform effectively as they are not even mentioned in the 1999 constitution. This is a great departure from all earlier constitutions that recognised them, and even gave them some functions to perform.

”Traditional rulers should be accorded specific responsibilities for conflict and security management in their domains. This involvement, devoid of partisanship, would enable active participation of traditional institutions in matters pertaining to the maintenance of peace and security in their communities.”

The royal fathers also sought to be involved in the recruitment of the police, Army and other security agencies, saying this will go a long way in the elimination of possible recruitment of miscreants into the security forces.

According to them, ”This could be done by integrating traditional rulers into the screening process to ensure that officers and recruits are of good character. The official involvement of traditional rulers (particularly the Districts, Villages and Wards Heads under the supervision of the Kings, Emirs and Chiefs) in security matters will ensure that bad eggs do not find hiding places in their localities since new faces in the community will easily be detected and investigated.

”The constitutional provision should provide for states to enact state laws to cater for specific peculiar matters relating to traditional rulers in the respective states. In addition, the Chairmen of the States Councils of Chiefs should be recognised by the constitution as Members of the Council of State as it has been in all the Nigerian Constitutions, except the 1999 one.”

Responding to their requests, the Deputy President of the Senate and Chairman of the Senate Constitution Review Committee, Senator Ovie Omo-Agege, told the traditional rulers that their requests were not too much to ask, urging them to lobby lawmakers at the national and state Assemblies, who are their subjects, for their requests to sail through.

He noted that there’s need to deepen partnership as government is better able to fulfil its primary obligation of safeguarding the lives and properties of citizens especially at the grassroots with the collaboration of traditional rulers who live with and know their people as well as their aspirations and challenges.

Omo-agege assured them that the review process will be open, impartial, inclusive and transparent in order to afford all Nigerians the opportunity to contribute to the process.

He said: ”Our experience in recent years inclines us more to the fact that our country’s path to greatness lies in the ability to maintain a fusion between democratic institutions and the traditional institution. In the days ahead, the committee will be holding a National Public Hearing, followed by the Zonal Public Hearings and invitations will be extended to Your Royal Majesties, Highnesses to attend and make inputs at these hearings. Surely, and without a doubt, the success of the process will rest on your beneficent support and partnership.”