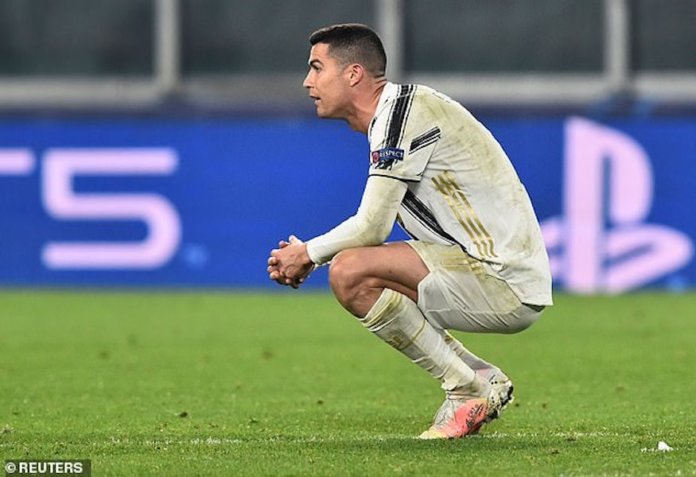 The Portuguese side were awarded a free-kick from 35 yards out in the 115th minute of extra time, which saw Sergio Oliveira line up a hit-and-hope shot towards Juventus’ goal.

With the scores level on aggregate at 3-3 and the game heading to penalties, Juventus, with a man advantage, were on the front foot and set up a three-man wall to stop the hopeful set-piece from reaching their goal.

With a long run up, Oliveira struck the ball low and hard towards the bottom left corner of Wojciech Szczesny’s goal, which saw Ronaldo turn away from the strike while parting his legs in a lazy attempt to block the ball.

A caught off guard Szczesny was unable to keep the ball from going in, and despite a fourth goal from Juventus to make it 3-2 on the night to Andrea Pirlo’s side, it wasn’t enough, leaving Porto to pull off a miraculous win, going through on away goals in Turin after drawing 4-4 on aggregate.

In the aftermath of the five-goal thriller, Ronaldo has been blamed for his role in Porto’s winner, with Capello one of his harshest critics.

“That was an unforgivable error,” Capello said in his role as Sky Sport Italia pundit.

“In my day, you chose the players who went into the wall and they couldn’t be someone afraid of the ball. They were scared of the ball and jumped away from it, turning their backs. That’s unforgivable.”

Rio Ferdinand and Robbie Savage also slammed Ronaldo’s decision to turn his back on Oliveira’s strike.

Ferdinand told BT Sport: “All three of them were at fault – turning their back and jumping out of the way.

“The whole thing was a catalogue of errors.”

Savage on commentary couldn’t believe what he saw from the former Manchester United and Real Madrid icon: “Watch the wall, the wall jumps, it goes through Ronaldo’s legs and turns his back!”

Speaking on commentary for talkSPORT, former Tottenham midfielder Jamie O’Hara said: “Pirlo will be livid, Ronaldo turned his back completely.

“It goes through his legs completely and leaves Szczesny with no chance.

“You don’t want to see that from your top player, not in those moments. You’re relying on your wall to do a job there.”

Juventus boss Pirlo was perplexed at his talisman’s decision to turn his back in the wall, claiming his players didn’t think the free-kick was dangerous.

“We choose the players to go in the wall. It had never happened before that they’d turn around, maybe they felt it was so far out that they didn’t sense the danger,” Pirlo said.

“It was a mistake, it usually doesn’t happen, the players didn’t feel it was a dangerous situation and conceded a goal.”

It is yet another disappointing European campaign for Juventus, whose wait for Champions League glory goes on.