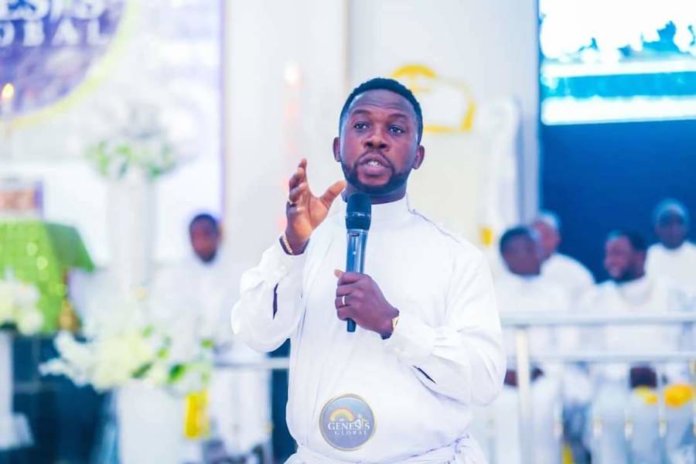 …Partners foundation to provide succor for the unjustly incarcerated

Despite being behind bars after he was convicted and sentenced to a two-year jail time four months ago, Prophet Israel Ogundipe of Celestial Church of Christ (CCC), Genesis Global Parish, has assisted 82 persons incarcerated unjustly regain freedom.

His philanthropic gesture was made public during the church’s partnership with Monday Ubani Foundation aimed at releasing more people abandoned in correctional facilities across the country without trial nor evidence of the crime they allegedly committed.

This was corroborated by the church’s Public Relations Officer (PRO), Gbolanhan Ashorobi, during an event to announce a partnership with the Monday Ubani Foundation.

Ogundipe was jailed by an Ikeja High Court nine years after the case of fraud and obtaining money under false pretences was levelled against him by a United Kingdom (UK) based Nigerian woman, Olaide Williams-Oni.

He was charged with seven counts of obtaining by stealing, including delivery of money by false pretence, unlawful conversion of property and forgery but five of the counts were quashed by the court for want of evidence, while he was found guilty of two counts by Justice Olabisi Akinlade.

Despite his incarceration at Kirikiri Correctional Center, the prophet is determined to see it as an act of God and has since been winning souls for Christ through ministrations, assisting in paying legal fees for awaiting trail inmates who could not afford it and getting lawyers to pursue the unlawful incarceration and abandonment of others at the facility.

It was this philanthropic gestures that drew the attention of the former second Vice President of the Nigerian Bar Association (NBA), Monday Ubani, who said his firm and foundation would join hands with the prophet to ensure more people being held unjustly are freed.

Ubani said he particularly picked interest in the prophet because of testimonies of how he donates toiletries and food to inmates, which are true examples of Christianity represented by love for God and humanity.

“Of utmost excitement to me personally and our law firm is the issue of facilitating the release of some of the inmates that have been in detention awaiting trials for good number of years. For instance, the case of one Azeez Ibrahim, who regained his freedom recently at the instance of the prophet.

“The man narrated how he wrongly served 10 years and six months at Kirikiri Correctional Centre for wrong identification. He regained freedom as a result of the intervention of the man of God.

“The number we gathered who have regained freedom so far through the effort of the prophet and his church has risen to about 82 inmates.”

Despite feeling that he was a victim of miscarriage of justice, Ubani said Ogundipe later realised that, just as many great prophets and famous world leaders who were once jailed for various offences in the past, he, (Ogundipe) was not exempted from prosecution, adding “who knows whether he has been sent to prison on a divine account and for a divine purpose?

“Which is why we applaud his zeal in getting those who are wrongly incarcerated justice through getting them out of the correctional centre using the judicial process.

“He is spending much of his time interceding with various inmates, and teaching them the word of God, listening to their various stories and the ordeals that landed them in a federal correction facility and counseling them in preparation to life outside prison.

“It is becoming clearer to the prophet the salient reason the Almighty God ordained his journey to the correctional facility.

“Upon being emotionally touched by the stories and the various ordeals of these inmates, the prophet, according to him, started to care for the families of these inmates, by paying for their children’s school fees, providing them with feeding allowances, paying legal fees for those awaiting trials etc. an act of philanthropy that Prophet Israel Oladele Ogundipe was famously known for before his unfortunate incarceration.

“This led him to reach out through his aides and representatives to the law firm of Ubani and Co. expressing his desire to team up with our law firm in order to give comprehensive legal representations to various inmates whose stories and ordeals are quite compelling both at the trial and at the Appellant Courts.

“We got interested in knowing this great apostle of God and we are interested in partnering him to secure the lives of those that are being wasted in prison by our imperfect administration of criminal justice system.

“We have expressed willingness to partner him upon conclusion of terms and we are throwing these open to meaningful Nigerians, individuals, or organisations to come on board this noble cause of helping in getting justice to those who are languishing in various correctional centres across the country. We must endeavor to rescue our fellow brothers and sisters that are victims of our faulty system.

“Please note that this is in furtherance to Prophet Israel Oladele Ogundipe’s intention of establishing his prison foundation, which is to be called Israel Oladele Prison Foundation which in part will be working in collaboration with Onyekachi Ubani’s Foundation to assist the less privileged who are denied justice through our skewed administration of criminal justice system.

“These two foundations with their mission and core value will focus on addressing social vices, counseling, youth empowerment and rendering of legal representation to indigents in need of legal services, especially those at the correctional xentres across the country awaiting trials that are never held,” he said.

The famous lawyer described as sad, events that led to Ogundipe’s conviction and sentencing, adding that he was glad the judgement of the trial court was being appealed by a very senior and competent lawyer based in Lagos.

“It is our conviction that justice shall be served at the Appellate jurisdiction. There are clearly yawning gaps in the entire story leading to his trial and conviction. We are worried that the exonerating report of the Alagbon Police Authority that was the last to investigate the whole incidence was never taken into consideration at the trial court.

“As said earlier, these and many more shall be strengthened in due course. We shall refrain from going into the facts of the case as the matter is presently subjudice. We promise to examine the legality of the trial and conviction whenever the appellate options are exhausted.

“Concerning his conviction and sentence, Prophet Israel Oladele Ogundipe strongly disagrees and has appealed against his conviction-challenging the conclusion and position of the trial court, and he is bewildered on how a matter which was earlier reported to the police for threat to life, metamorphosed all of a sudden into a case of stealing and obtaining money by false pretenses leading to his conviction and sentencing, a fundamental issue he has raised in his appeal.

“However, out of respect for the judicial process, and due to the fact that, his appeal is still pending before the honorable Court of Appeal, we will for now, leave details of his ordeal, trial and conviction until a future time when his appeal must have been determined whether in his favor or otherwise.”