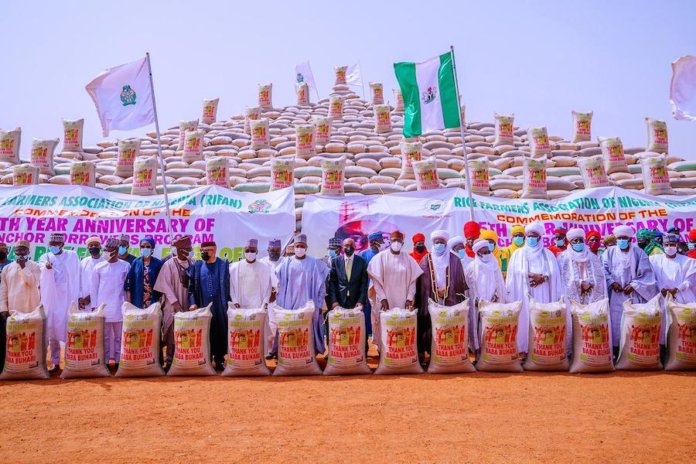 Jackson Ugbechie x-rays the Anchor Borrowers Programme launched five years ago by the Federal Government through the Central Bank of Nigeria, CBN, and concludes that it’s one of the best policies of the Buhari government as an antidote to unemployment

The recent celebration of the fifth anniversary of the Anchor Borrowers’ Programme (ABP) in Kebbi by the Federal Government spearheaded by the Governor of Central Bank of Nigeria (CBN), Mr. Godwin Emefiele, was a breath of fresh air. President Muhammadu Buhari must have gushed with joy by reason of the event witnessed by many governors and members of the international community.

A major component of the anniversary was the launch of the 2020 wet season harvest aggregation and 2021 dry season input distribution under the CBN-Rice Farmers’ Association of Nigeria (RIFAN) Anchor Borrowers’ Programme.

Dignitaries in attendance at the event included the Sultan of Sokoto, Sa’ad Abubakar III and former President of the Senate, Ken Nnamani. The President of Benin Republic, Mr Patrice Talon was represented by his Minister of Foreign Affairs, Mr Aurelie Agbenonci. The presence of the host governor, Gov. Atiku Bagudu was complemented by Dr. Kayode Fayemi, governor of Ekiti State and Chairman of the Nigeria Governors’ Forum.

Happening at a time the nation was grappling with insecurity and its attendant uncertainties including abduction and death, the stacks of locally-produced rice at Zauro, venue of the launch was evidence that Nigeria has turned a new corner in her quest to deepen agriculture and move towards guaranteeing food security for the citizenry.

The rice pyramid that formed a background for the photo-shoot for dignitaries showed that the ABP is not a mere political slogan. It is a reality and the CBN deserves accolade for the manner it has painstakingly conceptualised the programme and executed it across the nation.

Launched in November 2015 by President Muhammadu Buhari, the ABP was conceived as a low-interest loan scheme which gives ample flexibility for re-payment. To make the loan farmer-friendly, interest was reduced to as low as 9 per cent. However, with the advent of the COVID-19 pandemic, the interest was adjusted to five per cent. The loans are disbursed through any of the Deposit Money Banks (DMBs), Development Finance Institutions (DFIs) and Microfinance Banks (MFBs), all of which the programme recognises as Participating Financial Institutions (PFIs).

The ABP was to provide farm inputs in kind and cash to small-holder farmers (SHFs) to boost agricultural production. The essence of the small-holder farmers-focus was to deepen and widen the scope of agricultural production as well as maximise the output within the value chain. With the crash in crude oil prices resulting in low forex receipt for the nation, experts see in agriculture a veritable sector to rely on in the effort at diversifying the economy.

Whole scale reliance on crude oil receipts by successive Nigerian governments meant that other sectors suffered gross neglect. Agriculture which in the 70s sustained the regional economies was relegated to the background. This created a very unhealthy balance of payment between the country and other nations. The ABP was therefore aimed at reversing the negative economic trend aside achieving food security.

Categories of farmers captured under this programme include those cultivating cereals, cotton, roots and tubers, sugarcane, tree crops, legumes, tomato and livestock. Just as rice farmers have benefited from the programme, other crop farmers are also beneficiaries including those involved in processing of the crops for food, raw materials and for other uses.

In five years, about 3.8 million farmers cutting across over 20 farm produce have so far benefited from the Programme. Mr. Yila Yusuf, Director, Development Finance Department of CBN recently disclosed that the sum of N554.61 billion had been disbursed through the programme since inception. While commending President Buhari, Yusuf said the programme had done a lot to help farmers improve and increase their yields in addition to generating employment.

Analysts have continued to pour encomiums on the CBN and its governor for envisioning and sustaining the ABP. This, they argue, has saved the nation from unforeseen embarrassment and hunger during the lockdowns occasioned by the COVID-19 pandemic last year. Prior to the commencement of the programme, Nigeria was a heavy importer of food items including those that could easily be grown in the country.

Nigeria was leading other African countries in the importation of rice from Thailand. Wheat, cotton and sundry other items make up the import-list, costing the nation millions of dollars in forex. This led to a depletion of the foreign reserve. Matters were made worse by the crash in global price of crude oil.

This informed the opinion of those who see Emefiele as the man who saw tomorrow with all its dangers and headwinds and moved quickly to steer the nation out of harm’s way. During the lockdown, for instance, the nation did not go starving, especially with other countries playing protectionist politics with food export. Rather, Nigeria was able to feast on what she could produce, and there was enough food to satisfy the culinary needs of the people.

At the moment, CBN is tinkering with initiatives that would help stabilise prices of commodities. This is critical in order not to create a wild-bear price situation in which prices bounce up and down like a yo-yo. Maize, for example, recently became a victim of the wild-bear pricing with price of maize rising continually. CBN has taken proactive steps to stem this tide by going into a strategic maize programme to stabilise the price of the commodity.

As a way of encouraging more farmers to enlist in the ABP,CBN says it no longer accepts cash from them as repayment for their loans, instead, the apex bank rates every single commodity they produce and guarantees the price. This has helped to build farmer’s confidence in the programme as well as win their trust with the ultimate goal being to encourage more farmers to enroll in the programme. This step also discourages hoarding of the products, a development whose negative effect was already destabilizing the prices of commodities.

An elated Emefiele while speaking at the event disclosed that the CBN had financed 2,923,937 small holder farmers cultivating 3,647,643 hectares of land across 21 commodities through about 33 participating financial institutions in the country. This has created millions of jobs through the various strata of the value chain.

“Today is a demonstration of the growth that had been attained in the agricultural sphere. It is important to note that, we are still far from attaining perfection but the emerging result from the programme reaffirms our belief in the potentials inherent in our agricultural sector,” he told the audience.

Emefiele projects that farming will become a profitable venture in Nigeria as all farmers, because of the guaranteed off-take of their produce, are smiling to the banks.

He continued: “Under the 2020 wet season CBN and Rice Farmers Association of Nigeria (RIFAN) partnership, we financed 221,450 farmers for the cultivation of 221,450 hectares in 32 states of the country. Repayment of loan is crucial to the sustainability of the programme.

“In support of the growth recorded in this drive to attain self-sufficiency in food production and to moderate prices of agricultural commodities, President Muhammadu Buhari has approved the resuscitation of Nigeria’s commodity exchange. And the CBN in partnership with other stakeholders, will be committing at least, N50 billion to this initiative.”

The CBN governor said the apex bank is willing to finance one million hectares of rice farms in the present dry season farming with the plan of exploring two cycles of production within the season.

As a further proof of expansion of the programme, the CBN has commenced sale of 200,000 metric tonnes of paddy rice to 18 Nigerian millers. The strategic intervention of CBN means that farmers no longer suffer wastages of their produce as the nutty issue of off-takers had been addressed.

Another excited dignitary was Gov. Atiku Bagudu who expressed optimism that Nigerian farmers would take the country out of her tough economic challenges.

Bagudu who commended President Buhari for his support to all states in the country also thanked the CBN for transparency in the execution of the programme. Governor Fayemi also expressed the gratitude of the Governors’ Forum both to President Buhari and the CBN.

The President of Benin Republic, Mr. Patrice Talon, said he deliberately sent a team of about four ministers to Nigeria to witness the celebration of successes in agriculture.

“We have seen it all and we are going to establish a partnership in milling and produce rice together to feed the whole West African sub- region,” he said.

The National President of RIFAN, one of the major beneficiary groups, Alhaji Aminu Goronyo, commended President Buhari and the CBN, stressing that the ABP demonstrates in practical terms the government’s commitment to food security and genuine economic diversification.

Nigeria has witnessed two economic recessions between 2016 and 2020 but on both occasions, the nation quickly rebounded. Analysts attribute the quick exits from recession to the giant strides in agriculture driven by the ABP. They believe that the ongoing revolution in agriculture has not only stood Buhari out among past leaders but has positioned Emefiele as Nigerian farmers’ best ally and friend in the history of the CBN.