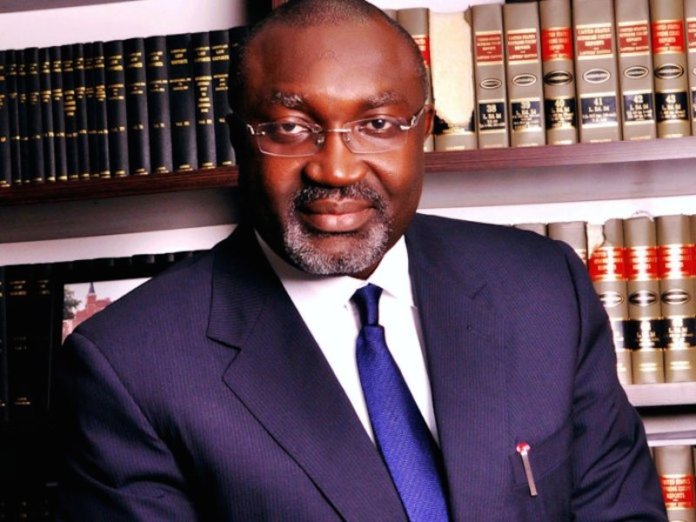 When a Federal High Court in Lagos last week discharged and acquitted a former prosecutor of the Economic and Financial Crimes Commission, Godwin Obla, it clearly demonstrated how not to victimise those who have laboured for the agency, Davidson Iriekpen writes

After five years of trauma, Justice Mohammed Liman of the Federal High Court in Lagos last Wednesday discharged and acquitted a former prosecutor of the Economic and Financial Crimes Commission (EFCC), Mr. Godwin Obla (SAN). The decision to clear Obla followed the withdrawal of the charges filed against him in a case involving a judge of the court, Justice Rita Ofili-Ajumogobia.

When the case came up same date for the re-arraignment of Justice Ajumogobia, an EFCC prosecutor, Suleiman Suleiman, shocked everyone in the courtroom when he announced the anti-graft agency’s decision to withdraw the name of Obla who had earlier been charged alongside the judge. Accordingly, the judge acceded to the request.

Obla, for the five years, was a prosecutor with the EFCC. He was moving from one part of the country to another and from one courtroom to the other prosecuting corruption-related cases for the anti-graft agency.

He successfully prosecuted the corruption case filed against a former Director General of the Nigerian Maritime Administration and Safety Agency (NIMASA), Raymond Omatseye and got him convicted after five years of legal battle. The conviction was hailed in different quarters as the first significant conviction ever secured by the commission in the fight against graft. He was also involved in the prosecution of the former Managing Director of Intercontinental Bank Plc, Dr Eratus Akingbola, a former Speaker of the Lagos State House of Assembly, Adeyemi Ikuforiji, among many others.

But as soon as Ibrahim Magu was appointed to head the anti-graft commission, the table turned. He soon became the hunted.

First, he was severally invited over his role in the Halliburton bribery scandal in which he was appointed by a former Attorney General of the Federation and Minister of Justice, Mohammed Bello Adoke, as one of the lawyers to help the country negotiate the plead bargain with the companies involved in the scandal for which they recovered the sum of $200million and got commendations from the federal government.

When it seemed the anti-graft commission could not establish a prima facie case against him, the next thing was to arrest and detain him for two weeks. His offence? He was alleged to have bribed Justice Ajumogobia with N5 million.

But Obla vehemently denied the allegation, saying that the payment, made on May 21, 2015 to a company, was for the purchase of building materials for his construction site in Abuja. He further clarified that at that material time of the said commercial transaction and till date, he had no privy knowledge that Justice Ajumogobia had any interest whatsoever in the company.

A bewildered Obla had said he was shocked to be confronted with the allegation of possible bribery payments to Justice Ajumogobia ostensibly in return for judicial favours. He insisted that there was no foundation or basis whatsoever for making any such payments. He acknowledged that Justice Ajumogobia was his classmate 33 years ago and had always been his friend but added that he had only minimal professional contact with the judge.

According to him, the records would indicate that in all her years at the Bench, the only matter he had before her was the case of FRN v. Raymond Omatseye, which commenced in 2010 and terminated in 2016, wherein he acted as a prosecutor for EFCC.

“For the record, I re-state that the only matter in which I have ever appeared as a lawyer before her Lordship, Justice Rita Ajumogobia was in Charge No: FHC/L/C/482C/10 between FRN v. Raymond Omatseye whose trial commenced by a criminal charge dated 22 December 2010 before another Court and was later re-arraigned before her lordship, Justice Rita Ajumogobia on an amended 27 count charge dated January 16, 2013. I acted as prosecutor for the EFCC and the trial culminated in the conviction of Mr. Raymond Omatseye in the judgment delivered by the court on 20 May 2016. Importantly, the conviction of Mr. Raymond Omatseye was very significant in the fight against corruption and was widely celebrated as the first conviction ever secured by the EFCC under the Public Procurement Act 2007,” he explained.

He alleged that notwithstanding the diligent and successful prosecution and conviction, the EFCC for whom he acted and who has deemed it a matter of public interest to make this bribery allegation has neither settled expenses he incurred over a six year period in prosecuting this matter nor paid any professional fee whatsoever in respect of the said matter.

Obla said he was at a complete loss as to why on earth he would be obliged to pay out bribe to Justice Ajumogobia for judicial favours since the only case he had ever taken before her court was as prosecutor on behalf of EFCC in a criminal charge which terminated in a landmark conviction for EFCC.

“It is inconceivable that I paid a bribe on behalf of or for the benefit of EFCC to her lordship, Justice Ajumogobia or any other person,” he said.

The senior advocate alleged that all the lawyers who were interrogated at the EFCC office in respect of various payments to judicial officers were all granted bail on self-cognisance, except him. He described it as a mystery that after his meritorious service to EFCC in various capacities, particularly as prosecutor in no less than 40 cases involving economic and financial crimes and securing convictions, for which his bill of charges continues to lie unsettled at EFCC, the present leadership has elected to treat him with disdain and needlessly detained him in its custody, without the benefit of doubt.

All his explanations and defence fell on deaf ears as he was arraigned before a Lagos High Court. Of course, at the court, the charges were struck out. Justice Hakeem Oshodi who delivered judgment in the case, held that following the judicial precedent set in the case of Justice Nganjiwa V. FRN, the EFCC does not have power to investigate and prosecute serving judicial officers but the National Judicial Council (NJC).

Ironically, on May 27, 2016, Magu himself, while speaking at the launch of the “Clean Hands Against Corruption Campaign” at the Eagle Square in Abuja, had alluded to the conviction of Omatseye as one of the “140 convictions the anti-commission had secured in six months.”

It then became curious that the same EFCC which lauded the conviction of Omatseye would made a complete volte face to allege that the conviction was secured as a result of “perversion of justice,” moreso as no indication was given as to whatever motivation Obla might have had to pay a bribe to secure a conviction on a supposedly watertight case presented by the EFCC.

Perhaps, what the EFCC did not carefully examine before filing the charges against Obla was that by alleging that the senior advocate attempted to “pervert the course of justice” in the case of FRN v. Raymond Omatseye, it was contending that the accused person ought not to have been convicted, and instead should have been discharged and acquitted. If that was the case, it raised pertinent questions about the investigatory and prosecutorial modus operandi of the commission as to whether it randomly embarks on prosecutions where it believes the suspect is innocent, while proceeding to waste precious public funds in the process.

Incidentally, Obla’s prosecutorial competence as an EFCC prosecutor was affirmed by the Lagos Division of the Court of Appeal and the Supreme Court in the case FRN V. Hon. Adeyemi Ikuforiji which he prosecuted on behalf of the commission at the Federal High Court to the Court of Appeal respectively. While ruling on the appeal, the appellate courts set aside the ruling of a Federal High Court which cleared Ikuforiji of allegations of money laundering.

Many observers believe that Obla was just a victim of Magu’s highhanded. This is why in responding to his acquittal, an elated Obla declared that his prosecution by the former EFCC boss was a clear case of abuse of state power. He noted that the termination of his prosecution and removal of his name on the charge sheet marked FHC/L/139C/ 2019, and dated April 17, 2019, was evidence that the charge was baseless and a waste of time.

“Obviously, the charge ought not to have been filed in the first instance as the charge sheet and the proof of evidence do not bear out any allegation of possible bribery payments to Justice Ajumogobia ostensibly in return for judicial favours inuring in favour of EFCC.

“There is/was no foundation or basis whatsoever for making any such bribe payments to a judge on behalf of the EFCC. Today marks the end of a long tortuous and arduous journey and affirms the particularly malicious and brutish obsessions of suspended/former acting chairman of EFCC, Ibrahim Magu with the naked and reckless abuse of state power for private end,” he maintained.

According to him, his discharge is of eminent importance as it confirmed that Magu “completely derailed from the ethos of the EFCC” and instead resorted to the unmitigated abuse of power as acting chair. He added that this derailment manifested in the wrongful arrest, detention and prosecution of several persons for unsubstantiated offences, purely out of malevolence.

“My history of service to the country in this regard is public knowledge and no temporary setback or personal misunderstanding is enough to obviate it. My time and resources will always be available to the Nigerian state within the strict parameters of the rule of law.

“I continue to remain steadfast to the nobility of my profession as a lawyer and Senior Advocate of Nigeria, and will always refrain from any act, which is capable of bringing the legal profession into disrepute,” he pledged.