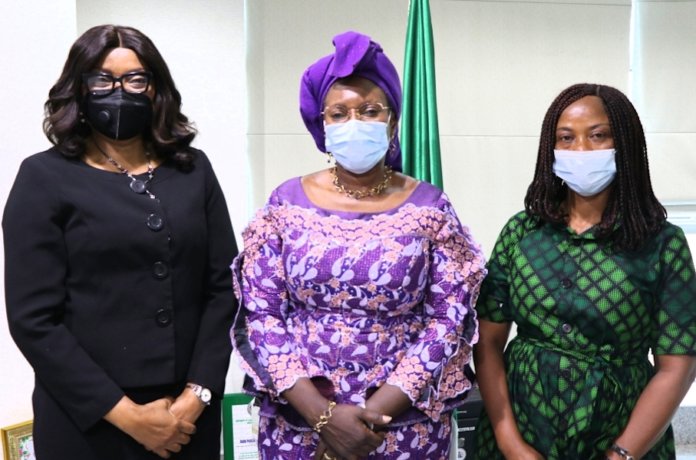 Minister of Women Affairs, Pauline Tallen, has made a clarion call to the organised private sector to support the country’s women football.

She insisted that the task of empowering the girl/child is a duty for all.

Speaking in her office in Abuja last Friday during a courtesy visit by officials of the Nigerian Women Football League (NWFL) led by its chairperson, Aisha Falode, and its Chief Operating Officer, Dupe Shabi, the Minister urged patriotic Nigerians and corporate bodies to help grow the league, which she noted has produced great players for the country.

Tallen assured the NWFL of her continued support, pledging to lead its campaign for sponsorship and a level-playing ground for the development of women football.

Commending the football body for its efforts to raise the standard of the women’s game and being good ambassadors despite all the odds against them, Tallen also praised the girls, clubs and their financiers for their perseverance despite the harsh economic climate.

Speaking earlier, NWFL Chairperson, Aisha Falode, had intimated the minister on the challenges facing the women league, adding that society still doesn’t give the girl/child the chance to develop and make the best of her talents.

Falode said Nigerians could empower and engage the girl/child using football, adding that so many talented girls have become their families’ breadwinners through football.

According to Falode, “The under investment and lack of value for women has stifled our country in so many areas, while in other climes, women have proved very essential in their developmental strides.

“Apart from one or two clubs, most of the other club owners in Nigeria still pay the men far better than the women. These are clubs owned and run by same governments.

“Some Nigerians still fail to see the need to treat women in sports with respect despite all the odds they surmount to fly the country’s flag high in global circles. It is on record that Nigerian women have won more laurels for the country than men, yet the men are still better treated than women.