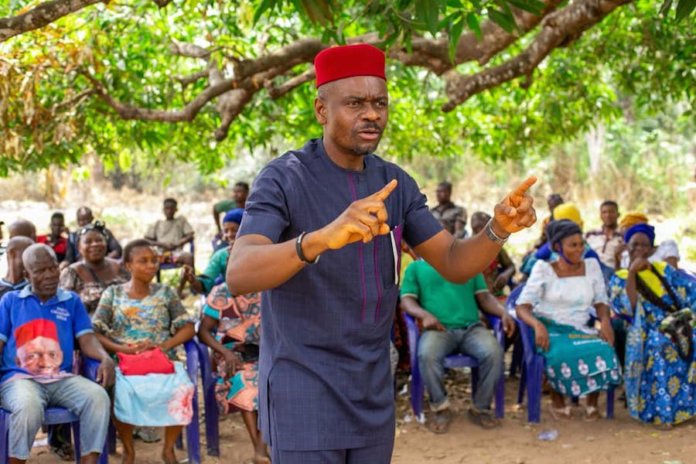 Sons and daughters of Azia community in Ihiala Local Government Area of Anambra State, at the weekend came out to endorse the governorship aspiration of Paul Orajiaka.

Orajiaka, a Harvard trained scholar and successful businessman, is one of the leading aspirants gunning to take over the mantle of leadership from Governor Willie Obiano under the platform of the All Progressives Congress, APC.

Speaking at the event, Okpara of Azia, Nze Donatus Ugochukwu stated that Orajiaka through his many years of selfless humanitarian services which had led to the development of Azia community, Anambra State and other parts of the country was the perfect man to take the state to the next level.

Nze Donatus Ugochukwu further stated that Azia community’s unanimous decision to support Orajiaka was not just because he is their son but majorly because among the many aspirants in the race for the Anambra government top job, he was the most visionary and youthful aspirant.

“Paul Orajiaka through his humanitarian efforts in the entire Anambra State have shown that if given the opportunity to lead the state, several challenges facing indigenes of the state will be a thing of the past.

“Our support for Orajiaka’s aspiration is not just because he is one of our illustrious sons but based on the fact that if you objectively assess all the aspirants eyeing Governor Obiano’s job, he is the most visionary and youthful among them.

Also speaking at the event, Odu of Azia, Ichie Benneth Abaniwu. said that there is no better time than now for a young and dynamic leadership as represented by Paul Orajiaka.

He said: “Paul Orajiaka is a visionary youth, a Harvard trained scholar who has done so much for his community and the country. He is young, visionary and has many other leadership qualities that Anambra State desperately needs now.”

A youth leader in the community, Mr Anselem Ezeanochie also pointed out that Orajiaka is the hope of Anambra State saying that youths in the community have resolved to mobilise themselves and seek the support of other Anambra youths to ensure that Orajiaka realises his aspiration to become governor.

He said: “As a people, we have been marginalised by successive administrations in Anambra State. Despite this, we continued to maintain peace with the hope that one day things will turn around. With Orajiaka’s aspiration, we believe it is our time to make a positive change in leadership.

“By every standard, Orajiaka is qualified to fly the flag of APC and we have resolved to reach out to other youths across the state to ensure that he wins both the APC primaries and the governorship election.”

Earlier in his speech, Orajiaka thanked the people for their overwhelming support and noted that he will not disappoint them when he eventually wins the race to become governor.

He said: “I am truly honoured by this overwhelming support from all sons and daughters of our community. With this show of love, I am motivated more than ever before to pursue this dream of giving our people purposeful leadership and development.”

“The task of rebuilding Anambra State lies with all of us. We must work together for the greater good of our people and support our great party, APC to ensure that we are aligned with the federal government. As your son, I can assure you that when the battle has been fought and won, I will never disappoint you.”