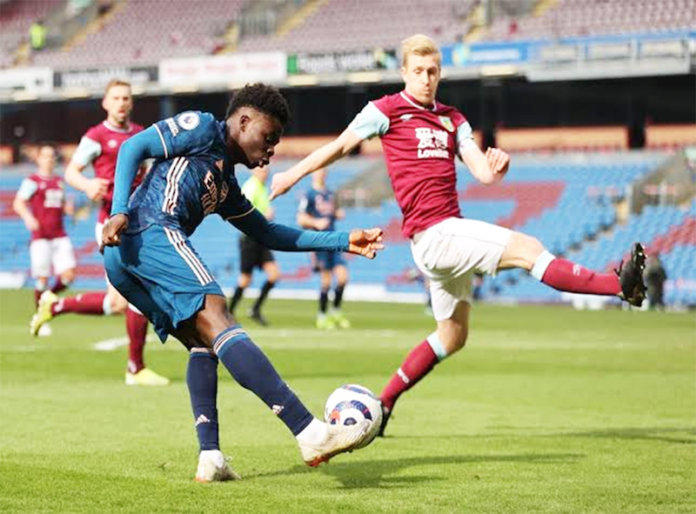 Arsenal were denied victory by the woodwork, some heroic Burnley defending and the video assistant referee amid a dramatic late onslaught as Granit Xhaka’s error ultimately cost the Gunners dear.

After Xhaka’s errant pass struck Chris Wood for a bizarre equaliser to cancel out Pierre-Emerick Aubameyang’s opener, Arsenal piled on relentless pressure in the closing stages.

The Gunners thought they had been awarded a penalty against Erik Pieters but the spot-kick and the defender’s red card for deliberate handball were overturned by VAR after replays showed he had diverted Nicolas Pepe’s shot onto the bar with his shoulder.

That was not the end of the late drama as Ben Mee’s block denied Aubameyang a sure-fire winner in stoppage time before Dani Ceballos crashed an effort against the post with almost the last kick of the game.

Ultimately, however, the blame for the dropped points will be laid at the door of Xhaka, who was sent off in the Gunners’ December defeat by Burnley and had another day to forget against the Clarets.

Receiving an ill-advised short pass facing his own goal from keeper Bernd Leno, he tried to clip a square ball to David Luiz across the penalty area but succeeded only in hitting Wood in the midriff and the ball bounced into an empty net for the softest of levellers.

Buoyed by the unexpected gift, Burnley controlled a scrappy second half before Arsenal’s late siege but Leno first produced a fine save to keep out Erik Pieters’ dipping 30-yard volley, and then used his leg to deny Wood in a one-on-one.

Adams rifled a half-volley into the top corner four minutes into the second half, ending a run of 16 games without a goal in all competitions.

Takumi Minamino should have added a third for Southampton when he fired wide from Ryan Bertrand’s low cross, while Adams, Nathan Redmond and Stuart Armstrong all went close late on.