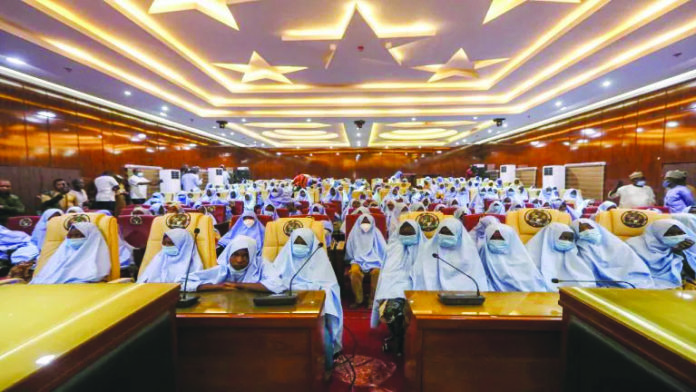 The insecurity in Northern Nigeria today is not accidental. It was a deliberate social decadence systemically incubated over the time and became a way of life for the society. The political leadership, the oligarchy and the proletariats accept the talakawa and almajiri’s poverty concept as God’s will. This has been the way of life of the North.
No nation in the world neglects its youth and expect to be at peace. The Almajiri system being practiced in the entire Northern enclave was a nuclear bomb waiting to explode and is now exploding.

I predicted the present insecurity in the North 25 years ago when I was doing my national youth service (NYSC) in Borno State. I have traversed the North EAST, NORTH WEST, NORTH CENTRAL, and have witnessed the Almajiri phenomenon. My personal encounter with them remains scary till today. I remember telling people around me and even wrote an article about it in a national newspaper in 1998, warning that if the federal and northern state governments failed to find a quick fix to the Amajiri issue, the future would be bleak for the North and the nation at large. We are now in that future today.

In our NYSC Camp in Potiskum, Yobe State, the almajiris were allowed to invade the camp at will. The Military manning the gate were instructed to always open the gate for them especially in the afternoon when lunch was being served. Most afternoon, the authorities ensured we are served a local diet that majority of the corps members (majorly from Southern part of Nigeria) did not like (Brabiscu).

The young boys, dirty, unkempt, trooped in with their plates in their hundreds. We had no choice than to give them the brabiscu as soon as we are served at the kitchen. We were always wondering about where they came from. When I couldn’t eat brabiscu, I would go to a restaurant in the Mammy Market in the camp to buy and eat better meal. There was a day I was in the restaurant eating. As I looked back to request for water, my plate of food was gone. I couldn’t believe my eyes when I peeped outside and saw 4 young almajiris eating my food hungrily without scruples. The restaurant owner quickly went on her knees begging me to leave them, warning that if I beat them, the consequence might be bloody. She had to serve me another plate of rice free.

On another day, I had a near conflict encounter with a fellow corps member in same platoon over the almajiris that invaded the camp. He wanted to fight me because I shouted on some of the boys who were putting their mouth directly in the tap to drink water; same source of water for all the corps members in the camp. I reproached them to get a cup to fetch the water instead of putting mouth in the tap. But alas, my fellow corps member went wild telling me that we southerners always think we are better than them. He said President Muhammadu Buhari was once an almajiri before he was picked up and sponsored into the army; that he himself was an almajiri before he was picked up on the street and sponsored to school. He was so vexed in his spirit that he brought out knife from his jackboot, to the shock of everybody and I had to beat it.

How will you manage a situation where millions of children as young as 4 years are left by their insensible parents to go and survive by themselves on the streets where they are at the mercy of Islamic teachers who are ready to indoctrinate them with religious extremism? Unfortunately this Islamic teachers become the only guardian they have; he mold their faith by his own belief; he provides food and sometimes shelter them under a tree in harsh weather. When he has nothing to feed them, he send them to beg on the streets.

The moment their polygamous father realised they are old enough to beg, he gives them plates and send them out to cater for themselves. They leave home at that early age, and become wild on the street. The children lack parental care and never know any family values.
From the streets they formed groups and move gregariously and menacingly about towns and cities. Some of them are groomed by radical Islamic scholars who radicalized them. Majority grew up and become enemy of the state; and social renegade to the society. Former Emir of Kano Sanusi Lamido Sanusi at various fora condemned this regional societal menace that breeds criminality.

Unfortunately, with Nigeria’s return to democracy in 1999, unscrupulous politicians find them as valuable human resource for political thuggery to rig elections and terrorize oppositions; they are cooked for criminality, armed with guns and machetes to kill, maim and destroy.
Not only did they become instruments for destabilization in the hands of Politicians, international terrorist groups like Alqaeda, ISIS, Hezbolar find them available human capital base for the spread of their islamization agenda in Nigeria. BOKO HARAM was borne out of a sour relationship with the former governor of Borno State Senator Alli Modu Sheriff. They have become so formidable that the entire military arms of Nigeria, fully stretched, have not been able to contain them. From Boko Haram, other coordinated insurgent groups have emerged terrorizing the entire nation. They come under all sorts of anecdote such as banditry, killer herdsmen, cattle rustlers, Fulani kidnappers etc.

The northern part of the nation has not known peace for over ten years now. When the outgoing Chief of Army Staff Lt. General Tukur Yusuf Buratai (Rtd) declared recently that the insurgents in the North will not go for the next 20 years, the nation was shocked, but those in the know, knew that the combatant general who had spent his entire 6 years tenure as Chief of Army Staff battling the insurgents, was damn right.
As long as poor people are allowed to give birth to children they cannot cater for; babies that are easily weened into the Almajiri system, raised through youth poverty and delinquency, the North will never know peace.

The federal government and some Northern state governments have made the situation so dire right now. This is because of the way they are handling the issue; which gives vent to the declaration of General Buratai that the insurrectionary may not end in the next 20 years.
Moreso, the leadership has politicized the crisis and institutionalised kidnapping by continuously negotiating with the bandits and kidnappers. They justified negotiation/ransom paying mediation approach as politically correct methodology of dealing with it. The presidency is dealing with the issue with kids gloves. Our Commander in Chief President Buhari is not ready to declare the crisis as act of terrorism. The body language and utterances of some political and religious leaders in the North have continuously emboldened the criminals who now see insurgency and other criminal acts as a sustainable lucrative business. Criminals now dictate terms and condition for negotiation; they are being begged to surrender and accept amnesty. No serious nations in the world follow that route to end terror acts and succeed.

If the leaders in the North failed to find solution to the almajiri social system, they will continue to breed banditry, kidnapping and all kinds of criminal acts and the region may never know peace. They must begin to invest in their people, start orientation campaign about responsible parenting, family values, and come together as a region to re-invigorate the almajiri and nomadic education program started by former President Goodluck Jonathan GCFR.
––Adetola Odusote is the Director, Re-Ignite Public Affairs Limited, a strategy driven research- based solution provider in the Public Affairs space for business and government in Nigeria. The firm provides services that help to improve governance, and enhance relationship between the business community and the different arms of government and its agencies.
PIX: Abducted Nigerians.jpg