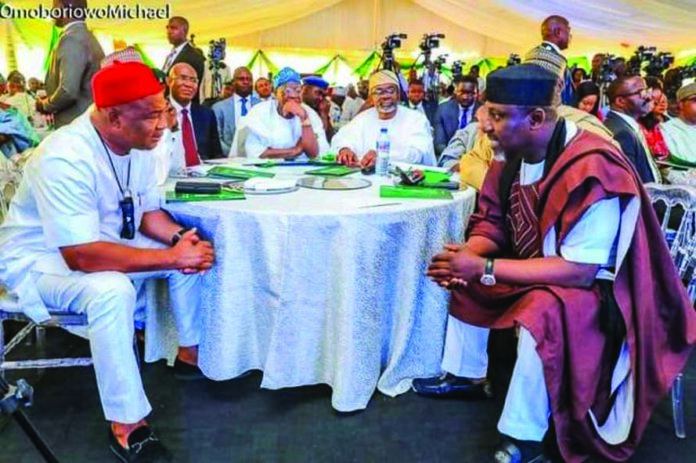 Imo State has been in the news for the wrong reasons lately. If it was not the military invading Orlu in a wild chase of the Eastern Security Network (ESN) members, it was Governor Hope Uzodimma and his predecessor, Senator Rochas Okorocha struggling for state property. But the eventual outcome of the fight might tell heavily on the All Progressives Congress (APC) in the state.

For Senator Rochas Okorocha, who was governor from 2011 to 2019, he never believed that the state he ran as an emperor for eight years could in less than two years of leaving office turn against him and sadly, for the wrong reasons. Sure it is, and due to so many cogent and verifiable reasons.

While he held sway as governor, Okorocha had the penchant for running the state as a family concern. His capacity for illegally acquiring state and people’s properties as well as his alleged lust for building properties, even with state resources, were unprecedented.
This was a man, who superintended the resources of the state for eight years, and what the people got from him were sprawling estates and properties in all the nooks and crannies of the state. Is it the Eastern Palm University at his village Okpoko in Ideato South local government area, or his Royal Palm Hotels and Apartment in Owerri, which he ascribed to be owned by his wife, Nkechi, or the former Imo Broadcasting Corporation (IBC) at Orji, that he turned to his private Rochas Foundation, or the massive land he converted to build his private mansion at Spibat?

Again, Okorocha’s conversion of the new Owerri area originally mapped out for the relocation of Imo New Government House, which he gave out to family members and cronies is another cause for concern to the government and people of the state. It is indeed an understatement for someone to say that Okorocha and family members own half of Owerri, capital of Imo State.

Then one can ask, were all these properties he claimed to belong to him and his family members there before he assumed office in 2011? And the answer is in the negative. When Okorocha contested for governor in 2011, some individuals had to contribute money for him to execute his election campaigns. But by the time he left office eight year after, he claimed to be richer than the state.

Granted that the period of his reign as governor experienced opening up of the state astronomically, it was also believed that the major reason for opening up the state was to enable him acquire more estates and property in those virgin areas. No wonder, Okorocha publicly laid claims to be richer than the state. That assertion is not contestable considering the amount of wealth he’s alleged to have amassed, using his office as governor.

Based on the above scenario, subsequent governments after him believed that in order to get back some of the properties he illegally acquired, is a task that must be accomplished. This prompted his immediate successor, Hon. Emeka Ihedioha, who had a stint in office before the Supreme Court removed him to set up a Judicial Panel of inquiry into land matters and related issues. That panel was set up to investigate wrong acquisition of lands and review lands taken over by the previous administration without due process.

The panel drew its powers from the Imo state Judiciary Panel of Enquiries Law created under the administration of Rochas Okorocha. To do its job efficiently, the panel invited memoranda from the general public – interested groups and persons. All that Governor Hope Uzodimma did was to allow the panel to continue with its inquiry for the general good of Imo people, having seen its potency.

The Panel completed its seating and came up with a 74-page report with recommendations to the Imo state government, which the state gazetted and became a supplemental legislation, having the full backing of the law. It was based on this, that the Imo state government sealed the premises of the Royal Palm Estate as recommended by the Judicial Panel of Enquiry and gazette it, having been built on an area specified as a green verge.

Commissioner for Lands, Survey and Physical Planning, Chief Enyinna Onuegbu, while reacting to issues of the implantation of the content of the gazette said, “the governor has directed that we certify all C of Os issued in the state as well as to maintain a register for allocation. We want to maintain transparency by ensuring that all allocation must be by public notice so that Imo people will know that a particular area is available for allocation and they will bid for it.”

On what government intends to do with the areas originally mapped out for government projects such as the proposed new government house complex at New Owerri, that had been tampered with by previous government, Onuegbu pointed out that the white paper answered those questions where public lands were taken for mixed used without change of purpose and when “we start to implement it, Imo people will know it is for their interest”.

Lending their voice in support of the government, Imo Stakeholders rose from a meeting last Saturday and mandated Governor Hope Uzodimma to use all legal means to recover all properties, including money belonging to the state, which was stolen by any public official regardless of the status. The stakeholders drawn from all walks of life from the three senatorial districts also said they were irrevocably committed to supporting the government of Uzodimma and would stand with and by him to ensure that his plan to rebuild Imo was achieved.
Those in attendance came from the 305 wards in Imo State and included prominent men, women and youth leaders, who mould opinions in the traditional, religious, political, academic, business world.

Earlier, Governor Uzodimma in his address to the stakeholders titled: “Imo State Must Be For All Imo People”, used the opportunity of the 4th Stakeholders meeting since he assumed office to brief Ndi Imo on his achievements so far in the last one year in office.
He also briefed them on the security situation in the state and the recent development involving Okorocha, who according to him took the laws into his hands by going to forcefully unseal a property sealed by the government.

Governor Uzodimma reiterated his earlier stance that he has come to serve Imo people with sincerity of heart, noting that his government would only do the things that were in tandem with the wishes of the people, insisting that nothing would make him change his vow to God regarding service to Imo.

He also pleaded with the people to be wary of those who were instigating crises in parts of the state for selfish political reasons and maintained that his government would never allow such persons and their mercenaries to wreak havoc on the state.
However, giving teeth to the government to implement the contents of the whitepaper on lands, Justice Fred Njemanze of the High Court sitting in Owerri on February 24, 2021, granted an application filed by L.M. Alozie (SAN) seeking an interim forfeiture of all properties acquired illegally by Okorocha while in office.

But, Okorocha in a swift reaction to the court order said, “Let us first and foremost, describe the Interim Order of forfeiture as belated, an after-thought and deceitful. It has further exposed the double standards of what we have in Imo today as state government. And equally strengthened our consistent claim that what is happening in Imo is a clear case of vendetta, envy, hatred and conspiracy by the state government against Okorocha and his family. Okorocha, in a release by his media adviser, Sam Onwuemeodo, noted that in their application for an Interim Order of forfeiture last Wednesday, the government never talked about the distortion of the Owerri Master plan again.

“They talked about illegally acquired properties. This is why the order is an afterthought, belated and deceitful. And with this Court order after they had invaded, looted and destroyed the properties in question leveraging on the Whitepaper, it only showed that they had acted wrongly, arbitrarily and unlawfully right from the outset,” he stated.
Interestingly, political pundits believe that the framers of the laws understood that the state doesn’t hold the monopoly of being right all the time, which is why the court exists for anyone to seek redress. Okorocha has been advised not to be ‘so rusty that he has forgotten the role of the court’.

The Peoples Democratic Party (PDP) in the state expressed dismay over the imbroglio happening in the state over time, accusing the APC-led government and members to stop the panic caused by the party in the state.
Publicity Secretary of PDP in the state, Ogubundu Nwadike said, “We wish to add that since the inception of the present APC Government in the state, Imo State has never experienced any modicum of peace. Rather, the state has continued to wallow and dangle on the debris of hopelessness, misgovernance and massive developmental haemorrhage. Rather than tormenting and unleashing terror on the Imolites, the APC government in the state should begin to champion a harmonised and defined strategy for leadership excellence and good governance.”