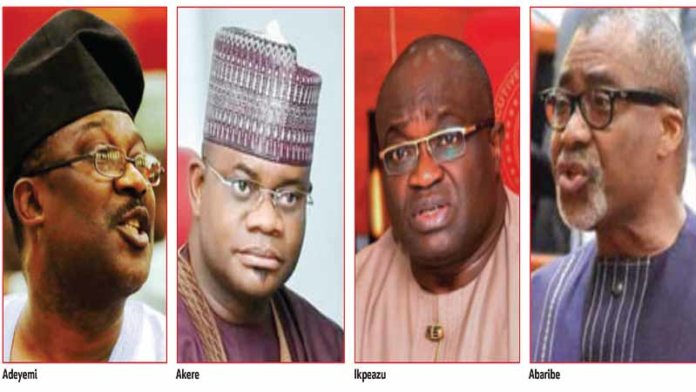 With the way it was received in both camps, Senator Smart Adeyemi’s recent tirade against Governor Okezie Ikpeazu of Abia State appears irredeemable. Emmanuel Ugwu-Nwogo report

Senator Smart Adeyemi’s name may not ring a bell in Abia State. But his recent outburst against the Governor of the state, Dr. Okezie Ikpeazu has placed the Kogi West senator on the lips of not a few Abians. Adeyemi has so far got quite a load of criticisms enough to drown him if they were in liquid form.
No word has been spared in hitting back at the rather irresponsible utterances of the lawmaker, who threw caution to the wind in what he justified as his own way of defending his governor, Yahaya Bello of Kogi State.

The drama on the floor of the hallowed chamber of the Senate on February 23, 2021 was like a bolt out of the blue. No one saw it coming as the issue before the Senate was a motion on the need for revalidation and restoration of the Safe School Initiative. Then, there was a complete deviation from the direction of the debate, when it got to Adeyemi’s turn to speak.
Going off tangent, the Senator launched a verbal assault on the governor of Abia State and called him “a drunkard” and “a champagne drinking governor”.

Adeyemi joined the people of Abia as targets of his mudslinging outbursts wondering why “Abia is governed by drunkards” in spite of the fact that the state is inhabited by highly intelligent, highly educated and highly enterprising” people.
The corollary of Adeyemi’s statement is that, aside from the governor, there are other “drunkards” serving in the government of Abia. It was indeed an outlandish claim. Sadly, not even the interruption from the Senate President, Ahmed Lawan, could stop Adeyemi from completing his voyage of a drunken senator.
The initial response from Governor Ikpeazu was to dismiss Senator Adeyemi’s tirade as a product of not even drunkenness but outright mental derangement.

In a statement by his chief press secretary, Onyebuchi Ememanka, Ikpeazu suggested that the Kogi West Senator should present himself for medical examination to ascertain his mental state.
“Our view is that the Senator is either suffering from a protracted case of mental illness or is battling with occasional fits of schizophrenia, which manifests in making careless, dishonorable, unrelated and incoherent statements,” the statement read.
As individuals and groups from Abia fired missiles to ostensibly pulverize Senator Adeyemi, it was not until March 2, 2021 that Ikpeazu personally responded to the comments made by the Kogi Senator.
The opportunity came at the launch of the book MADE IN ABA, an autobiography of Senator Enyinnaya Abaribe at the Shehu Yar’Adua Centre, Abuja.

“Let me use this opportunity to respond to whether or not I am a drunkard as posited by someone last week,” said the Abia governor. “I do not drink and I don’t begrudge those who do”. With this categorical statement, Ikpeazu effectively deflated Adeyemi’s drunkard claims.
The Abia governor noted that it was regrettable that “at a time when leaders are called to speak on serious issues affecting our people, some chose to dwell on what others do and what they do not do”.

However, the Abia governor refrained from wading into the murky waters of verbal onslaught against his traducer. “If you are bathing and a mad man takes your wrapper and runs away, if you run after him naked, people will not know who is the mad person,” he said.
Amidst the barrage of criticisms, Adeyemi made efforts to justify his inglorious outing, when he said the insults he poured on Governor Ikpeazu was in retaliation for similar attacks on his governor, Bello. The Kogi West Senator alleged that the Senate Minority Leader, Senator Abaribe had insulted the governor of Kogi by insinuating that Bello’s abysmal performance was not portraying Nigerian youths as capable leaders.

But observers are still searching for the genuine reason Adeyemi left Senator Abaribe and instead went for Governor Ikpeazu if he was so hurt by the comment allegedly made by the Abia South Senator. It is quite obvious that the former President of Nigeria Union of Journalists (NUJ) owed the revival of his political career to Governor Bello, who helped him to defeat his nemesis, Senator Dino Melaye.
No doubt, Adeyemi had gone overboard to please his political saviour, Bello by dragging Governor Ikpeazu into a matter he knew nothing about. The Kogi Senator had hidden behind the parliamentary immunity conferred on lawmakers inside the hallowed chamber to soil the image of both the governor and the people of Abia.

Some critics have, however, faulted Adeyemi’s lame duck excuse, wondering why the alleged insult on Governor Bello did not have the tsunami effect, like that of Ikpeazu, if it was as weighty as Senator Adeyemi perceived it.
Senator Mao Ohuabunwa, said he was gutted by Adeyemi’s conduct in the red chamber, warning that “the Senate is not for thugs”. He berated Adeyemi for making such “uncouth, careless and derogatory outburst against the (Abia) governor at such a hallowed chamber, more so when there was no link between the matter being debated and Abia government”.

A former governor of Abia, Senator Theodore Orji in a statement issued by his chief liaison officer and spokesman, Ifeanyi Umere regretted that Senator Adeyemi could scandalize and drag the image of a sitting governor to the mud without any justification.
Orji, who is currently serving his second term in the Senate for Abia Central, noted that, by his conduct, Adeyemi has displayed ignorance of “the enormity of the dignity and carriage which the office of the governor conveys”.
The member representing Arochukwu/Ohafia federal constituency, Hon. Uko Nkole contended that the “uncomplimentary and unparliamentary” outburst against Ikpeazu breached the rules of the hallowed chamber of the Senate.

The Abia federal lawmaker argued that Senator Adeyemi was out for mischief and hate speech as Governor Ikpeazu “was never the subject of the motion being debated and by no stretch should his name have come up negatively in the course of Senator Adeyemi’s contribution.
The political parties were not left out in the fray. The main opposition, Peoples Democratic Party (PDP) was the first to react, when the Southeast zone of the party vehemently condemned Adeyemi over his unguarded verbal assault and demanded that he should publicly apologise to Governor Ikpeazu within seven days.

The position of the party was contained in a statement by the zonal publicity secretary, Augustine Elochukwu, following an emergency meeting of the zonal working committee (ZWC) at Enugu.
The zonal party leaders stated that the description of Governor Ikpeazu as painted by Adeyemi with a tar brush has no bearing with reality. They warned that Senator Adeyemi would be dragged to court if he failed to apologise.

The All Progressives Congress (APC) would take none of that. It promptly countered the PDP, arguing that the Senate Minority Leader is the right person to offer apology over his uncomplimentary remarks against Governor Bello. The APC Deputy national publicity secretary, Yekini Nabena, threatened in a statement that the ruling party would take “legal action” against Senator Abaribe if he failed to publicly apologise to Bello. For now the standoff continues as none of the dramatis personae has blinked yet. Senator Adeyemi is yet to retract his tirade and tender an apology as demanded by Abia people and PDP. Senator Abaribe, on his part, has not apologised to the Kogi governor as demanded by APC.
It’s yet to be seen if any of the aggrieved parties would make good their threats of seeking legal redress. But as a way out of the imbroglio, the caretaker chairman of Abia APC, Hon. Donatus Nwankpa has said that both Abaribe and Adeyemi should apologise to the governors they insulted.

“The people of Abia State are not quarreling with Adeyemi; Okezie Ikpeazu is not quarreling with Adeyemi. What happened is that Senator Adeyemi and Senator Enyi Abaribe left their responsibility as lawmakers and were engaging in banters and they carried their jokes too far,” he reasoned.
He said that it was necessary that, “we should call these two gentlemen to order to live up to the responsibility why we sent them to the red chamber, where you don’t go and crack expensive jokes”.