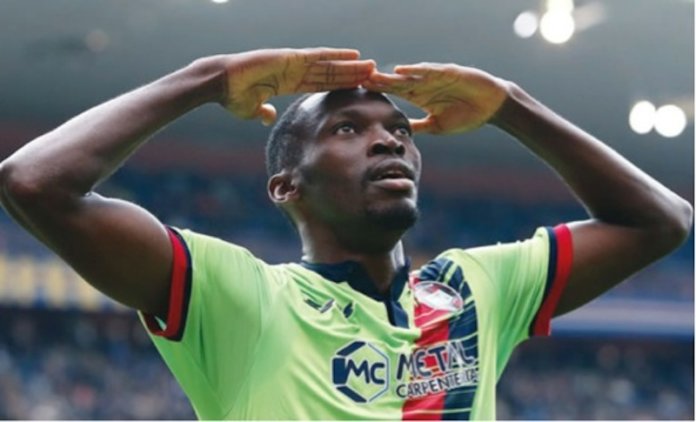 His influence with Serie A side, Crotone this season has been unprecedented, contributing 12 goals so far- scoring eight and assisting four; yet his efforts might still not be enough to save Crotone from relegation as they sit rock-bottom of the Serie A table. With 13 matches to go, is there anything Nwankwo could do to salvage the fortunes of his team?

When Simi Nwankwo scored the equaliser for Crotone against Atalanta midweek, observers felt it’s the beginning of the club’s fortune turnaround which the fans have been craving for season-long. It however was not to be as Crotone capitulated and got pummeled 5-1 eventually to remain rock-bottom of the Serie A log.

Nwankwo, however, remains confident his struggling Crotone side can shock the bookmakers in the Italian Serie A by staying in the league despite a difficult campaign, saying the hard work put in by the rest of the squad shows their determination and focus in their quest for survival.

“Our chances are very bright; we just have to continue believing in the good work we are doing as we’ve been playing good football not minding our limitations we keep faith in our games. So, I am very positive we will finish the season well,” Simy as he is fondly called by admirers, reiterated.

The five-times capped Super Eagles player said the Italian Serie A remains a competitive league and has been a massive test for him with plenty of world-class players plying their trade in the league.

The Nigerian’s 20 goals which was Serie B’s highest helped Crotone gain promotion to Serie A this season and had been hoping his present form could be able to earn him a recall to the Super Eagles which he last starred for in 2018.
Nwankwo has five caps and one goal for the Super Eagles since he made his debut against the Democratic Republic of the Congo in May 2018.

The forward was part of Gernot Rohr’s side that was eliminated in the group stage of the 2018 World Cup in Russia, playing as a substitute against Croatia and Argentina.
The striker has, however, not featured for the West Africans since he made a bench role against Seychelles in September 2018 in an Africa Cup of Nations qualifier.

Nwankwo feels Crotone’s relegation to Serie B before their return to the early division reduced his chances of a regular call-up to the national team and now hopes for more opportunities with the side.
“When I went down, I knew the risks of losing that spot that I worked so hard to get to although I didn’t play more, which is perfectly understandable,” Nwankwo told ESPN.

“I met a team that was already structured with one of the best African strikers at the moment. And it was normal, it was perfect for me to stay calm and learn and then watch how things are done. And then all of a sudden, I found myself out again, which is understandable.

“This season, I’ve done well. That puts me in a good window to be looked into by the coaches and everybody that makes the decisions. I hope that in the future I will have my chance back again.”

Meanwhile, the 28-year-old has expressed his delight with the transfer of his compatriot Victor Osimhen to the Italian top-flight, Napoli and believes the switch to the Serie A would further aid the forward’s development.
Nwankwo, who has been with the Pythagoreans since 2016, is looked forward to a healthy rivalry with his compatriot for goals in the Italian top-flight.

“We will score more goals, united we stand. He will do it for Napoli and I will do it for Crotone,” he said.
“Personally, I don’t set goals. The only thing I set out for myself at the start of the season every year is just to do better than I did last time.”
Nwankwo, who has five caps for the Super Eagles, joined Crotone from Gil Vicente.