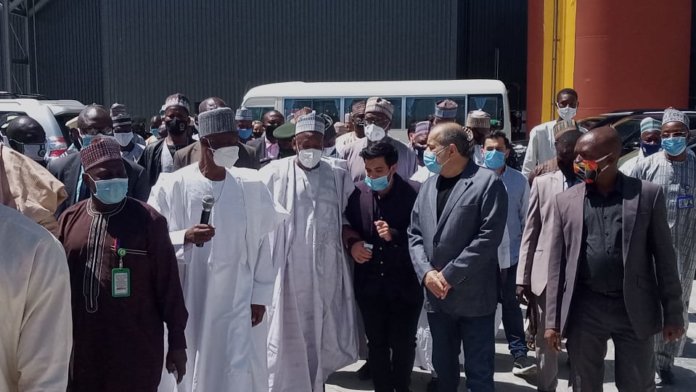 The governor, who gave the commendation during an official visit to the company site to commission the new plant, recently, also appreciated the company for its immense contributions in the employment of thousands of job seekers in the state.

Addressing the officials and the management staff of the company, led by their Chairman, Alhaji Ahmadu Haruna Danzago, the governor observed with delight that Aspira Nigeria Limited has been serving as a catalyst for economic growth in the state. The company which began operations in Nigeria about a decade ago, has continued to expand its operations, introducing a new range of health- care products that serve the need of the populace while creating employment opportunities for many residents. According to Ganduje, “We have been taken round to see their products and from the information they gave us, they have employed so far in this company more than 5000 youths from Kano State and from all over the country. Even foreigners are being employed in this company”

“We have gone round and we have seen that they are producing various products, ranging from detergents to soaps, to even the toothpaste that would soon be commissioned. So, we thank this company for producing more and more here in Kano” the governor said.

Ganduje observed further that the firm has made Kano the real commercial nerve centre of not only Nigeria, but also of the West Africa countries that do businesses with it.

“We have seen that your products are exported to most West African countries and in some cases, to Europe. There is no better way to support the people of Kano State and the people of Nigeria than what you are doing now and we encourage you”, he added. Ganduje also expressed joy at the fact that the company is producing its own gas for its own use, hence it depends less on electricity supply for its operational activities.

“By generating your own gas system, you are making and producing electricity for yourself and making it benefit the less privileged neighbours around you and we are happy about that too,” he added.

The governor, who revealed that work has started for the construction of the gas pipeline from Ajeokuta to Kaduna and to Kano, said that when the ongoing project is completed, the gas the company uses now would be much cheaper.

“You will operate at a much cheaper rate and the government would get more taxes and you would employ more people because it would give more opportunities to you to expand your company” he noted.

“So, we all thank Mr. President, Muhammadu Buhari for the gas project, especially for the fact that work has started on the project and Kano would enjoy the benefit of the project”, the governor said further.

The governor and his entourage, was taken on a facility tour of the company who at the end of it was impressed at the quality and high factory standards that was implemented by the management.

Chairman of the company, Alhaji Haruna Ahmadu Danzago appreciated Governor Ganduje and his administration for providing an enabling environment for businesses to thrive in the state. He stressed that the progress recorded by the company over the years would not have been attained without the benefit of the numerous private sector friendly policies of the state government. He also observed that the company has been enjoying a very cordial relationship with its immediate community and with the people of Kano State.