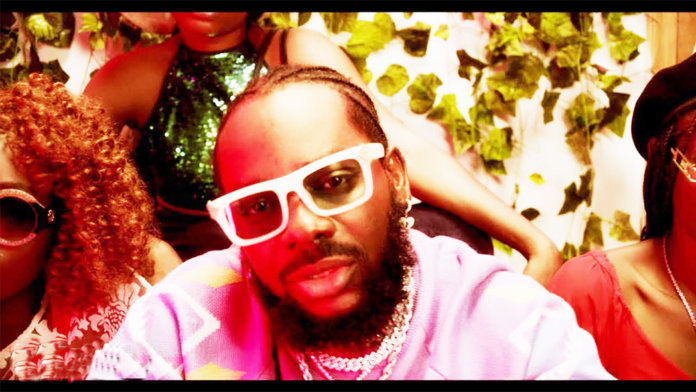 To start the year, Adekunle Gold furthers his relevance with the video for the song, Pretty Girl, which is off his recent 10-track Afro-pop Vol.1 album. Ferdinand Ekechukwu reports

Afro-pop star, Adekunle Gold has released the official music video for “Pretty Girl”. The song features another reggae star, Patoranking. The track is off his 10-track Afro Pop, Vol.1 album which dropped last year. The new music video, directed by Olu The Wave, is a fun and vibrant conceptualisation of the song’s energy and central message about a pretty girl who admittedly put them under a spell. The music video opens in a colourful bar complete with vinyl hanging on the wall, beer crates stacked on top of one another and old posters.

The setting is very much retro with patrons dressed in vintage-style pieces and accessories. The scenes that follow are set in the hallway of a rundown building and the courtyard outside. Surrounded by a number of “pretty girls” and coupled with energetic choreographed sequences, the music video is certainly another Adekunle Gold showstopper. Patoranking’s distinct offering creates a seamless synergy between the two artistes and brings the entire production together. The music video comes just after Adekunle Gold featured on British singer, Nao’s “Antidote” which dropped in January of this year.

Driven by the likes of standouts including Okay, Something Different, Sabina, and Pretty Girl among others, Adekunle Gold’s new project remains rooted in the list of albums that ruled 2020. To start the year, he furthers its relevance with the video for Pretty Girl. In a mail sent to some of his fans shortly after the album release, the singer said “The idea of Afro pop had existed since Nov 2017. “I felt like I had stepped into other people’s ideas of me and was really looking for an avenue for me to express myself limitlessly.

“So, Niyi (his manager) and I came up with this idea to create a small EP of 4-6 songs which she geniusly named Afro Pop. Off I went with the charge to create this experimental body of work which turned out to be so much fun. I went from 4 songs to 6 songs, to 12 songs to uncountable… I should say this, even before you heard “About 30,” my next 2 albums were already in the works. Currently, my 5th album is in ideation. The 29-minutes album was released under EMI with licensing from Universal Music Operations Limited.

The song generally speaks about a man and woman dancing erotically and afterwards having sex all. Joined by Patoranking whose Rastafarian inflections, brings the video to a jarring start. The song actually focuses on the girl being a spoilt girl. As a line on the song includes, ‘tell your mama say you don spoil’. Patoranking could be heard telling the girl that he would steal her heart and run away with, which means he’s ready to make her fall in deep love with him. The song is commendable and one fans are certainly loving. Within days of it release, it has garnered thousands of streams and download on music Sharing platforms. People always love good songs you’d have to admit.

In July 2016, Adekunle Gold had just released his debut album, ‘Gold’ when he realized that he needed to switch his sound. ‘Gold’ was rooted in African folk music and highlife, but Adekunle Gold felt the need to make pop music. His greatest fear has always been a pigeonhole and his awareness of that reality makes him willing to evolve as necessary.

His sophomore album, About 30, got mixed reactions from critics. While About 30 was still rooted in Folk and Highlife, Adekunle Gold intentionally infused the album with pop music and it got critics conflicted. Still, Adekunle Gold didn’t stop – he kept releasing pop music with Afro rhythms. By mid-2019, he had fully transformed his sonic and stylistic brand. His fashion was more avant-garde and androgynous while he sang in more English on Afro-pop beats. Some of his 2019 singles like, ‘Young Love,’ ‘Kelegbe Megbe’ and ‘Before You Wake’ up were the sacrificial lambs on the way to how Adekunle Gold wants to be perceived.

Just after COVID-19 tensions began to douse, Adekunle Gold returned with, ‘Something Different’ and ‘AG Baby.’ What happened next was an acceptance of his new being. With that acceptance came praise for his commendable, ‘rebrand.’ After a 12-month delay, he released his third studio album, Afro-Pop Vol. 1 on August 21, 2020. The blend of Patoranking reggae lyrics with Adekunle rich voice and lyrics just makes it something fans will surely put on replay from morning to night.