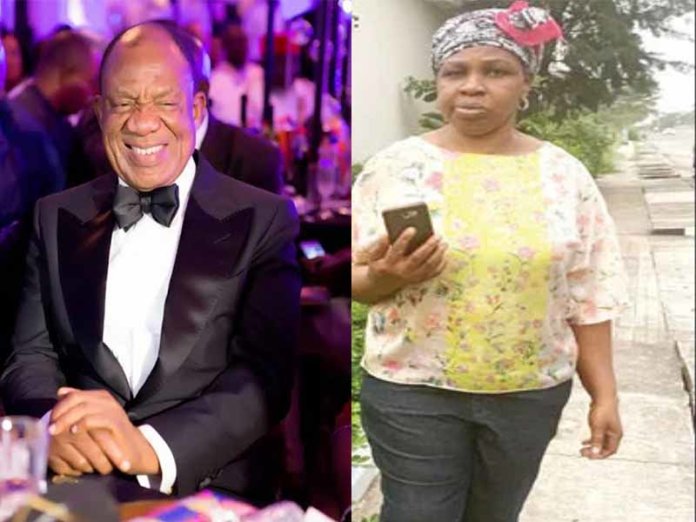 ….Finding Calm after a Stormy Marriage

In the longing of Mrs Agnes Ikpea, wife of the billionaire oil magnate, Chief Leemon Ikpea, she made no difference between the pleasures of luxury and the joys of the heart, between elegant living and sensitive feeling, a lack of awareness that has consequently jeopardised her decades-old marriage. For his sanity and peace of mind, Chief Ikpea has sued for divorce from his estranged wife who has been variously described as a woman of mean understanding, little information, and uncertain temper. But she is not leaving without a fight, writes Lanre Alfred

Forget the wealth and status, the gilded and glamorous lives; they don’t necessarily guarantee longevity or contentment in marriage. Grace, patience and tolerance for each other do. Alas, it seems many Nigerian women are running thin on these three virtues. No less, Mrs Agnes Ikpea, wife of Chief Leemon Ikpea, Chairman of Lee Engineering and Construction Company, a player in the oil and gas and construction sectors.

Circa 1982, Chief Ikpea was a young man working his way through life but felt he needed a companion. He was 24 years old and decided to give marriage a shot. Agnes, unlettered and rustic, who, at the time, had not gone beyond her village in Edo State, was introduced to him by his uncle. He went ahead to marry her. The young Ikpea gave her everything she wanted in life. He had beautiful plans. The plans were lofty and lovely and they revolved mostly around his wife. The kids rolled in. They have six together now, all adults. But things did not quite go as planned as the character traits of the two partners conflicted with their romantic dreams and aspirations. Every attempt he made to brush his wife up educationally and socially failed. She, literally, remained stuck in her old, yokel ways, uninterested in developing herself.

Chief Ikpea, who had risen high on the rungs of wealth, also reportedly got her a home tutor but she failed to grasp whatever she was taught. He set up businesses for her, notably, a fashion house and a salon, and she failed at them. All of these did not make the man happy. A source close to the family said that despite the number of years they were together, “Chief Ikpea hardly had a breathing space because Agnes was never satisfied with anything the husband did for her and she was abusive, abrasive, threatening and antagonistic. She courted trouble with ease and was fond of physically seizing him. demanding more money.”

At the root of Mrs Ikpea’s antagonism, a close family member with knowledge of her bad behaviour told THISDAY, is the realisation that her husband is a bona fide billionaire. “She became covetous and insatiable and nothing the man did was good enough for her. She wanted her own houses and she got two, but ran those businesses aground. From salon to fashionhouse, she failed. She wanted her own cars, she got. All her kids are sorted for life. But she still is not satisfied. Unfortunately, she has co-opted her children into the fight against their father who has done so much for them. A dirty campaign is now being waged the man who brought her out of abject poverty. Now she is a proud owner of three properties in Lagos.”

Some of the factors that may also have led to Chief Ikpea deciding to quit the marriage for good include poor attitude, relentless, nagging, fear for his life, and the ingratitude of his children who – despite all he has done – they are not appreciative – his belief that their mother deliberately turned them against him.

“After working so hard all his life; and after all he has done for his family – nuclear, extended and even his daughters’ husbands included – Chief Ikpea deserves his peace of mind. The society or his kids should not decide for him where his happiness is. If it is divorcing Agnes, the entire Ikpea family stands with him,” said the family member.

Ostensibly, when he could no longer bear his wife’s penchant for trouble-making and undisguised antagonism, Chief Ikpea decided to divorce her. Divorce proceedings were instituted at the Edo State High Court. On February 21, Justice Joseph Itsebaga Acha of the Edo State High Court granted the application of Chief Ikpea for his wife to vacate their family home in Banana Island, Lagos, and to refrain from further causing him any harm. The judge also ordered him to provide suitable accommodation for his wife around Victoria Island, Lekki or anywhere convenient in Lagos outside of Banana Island, Ikoyi, pending the determination of the substantive divorce suit.

Promptly, Chief Ikpea got his estranged wife a well-appointed apartment in in Ikoyi, Lagos. Mrs Ikpea’s lawyers were duly informed and they duly and signed receipt for the apartment. So so when they claimed in newspaper publications that Chief Ikpea failed to provide alternative accommodation as directed by the court, it is a lie from the pit of hell deliberately being peddled to whip up public anger against Chief Ikpea.

The Ikpea children were all also privy to their mother’s new apartment. It is instructive to reiterate, based on different sources, Chief Ikpea complied fully with the order of the court by getting her an entirely new place. Which her lawyers failed to disclose in several publications appearing in the media.

Given that there is no legal or constitutional restriction whatsoever as to which court one could seek a divorce in Nigeria, Chief Ikpea chose Benin, Edo State, not because he is from the state or is acquainted with Justice Acha. Sources close to him say he has never met the Justice! Also, opinions and reactions were mixed as many who do not know the intricacies of the case screamed blue murder, castigating and querying Justice Acha’s authority to preside over a divorce case as if he started the legal profession yesterday. For emphasis, Justice Acha is the second most senior judge in the Edo State High Court hierarchy. So, he is no small fry!

On Monday, March 1, several reports surfaced in the social and traditional media that Mrs Ikpea was ejected from the same house the court had asked her to vacate. Pictures of the ‘ejection’ – with her bags and other paraphernalia all neatly arranged in luxury travel bags and sellotaped cartons – were generously displayed in a move that discerning watchers have interpreted as deliberately whipping up public sentiments. She claimed in the reports that Chief Ikpea resorted to self-help and engaged thugs to physically throw her out of the home they shared the day after the judgment. For such a scorned woman, why wait for two weeks to raise the alarm of the alleged injustice? Only Mrs Ikpea and her children can rightly answer the question. In a video recorded by one of her daughters who allegedly came to fetch her after she was purportedly left stranded outside her matrimonial home, Mrs Ikpea said some ‘hefty men’ sent her packing bare-footed without concluding arrangements for where she would stay. The picture of her neatly arranged bags tells a contrary story.

Sources in the know of the drama argue that Mrs Ikpea was not in short supply of where to move to based on the court order. Before they parted ways, the Ikpeas had six children all of who are now adults and living very well off their father’s affluence. Their 30-year-old son lives in a N450 million house in Banana Island bought by Chief Ikpea last November and she could have conveniently moved there. One of her daughters, Augusta Ikpea-Enaholo, also runs the Royal Oaks Event Centre, a multipurpose state-of-the-art event centre in Lekki, commissioned in 2019 by Governor Babajide Sanwo-Olu. The event centre, valued at about N850m, was solely funded by Chief Ikpea. Other children of the Ikpeas all have their multi-million naira businesses and homes courtesy of their father; just as he also employed and bought houses for his two sons-in-law, among other luxuries that make life worth living.

In syndicated press releases, Mrs Ikpea has prayed the Appeal Court, Benin, to set aside the order of the court.

A businessman and philanthropist, Chief Ikpea is an intensely private and media-shy billionaire. Apart from contemporaries in the business circle and a few friends in the political space, he never hugs the limelight like other billionaires. His Lee Engineering and Construction Co. Ltd. is a high-level service provider in the Engineering, Procurement, Construction, Operation and Maintenance (EPCOM) with over 30 years’ experience in the oil, gas and power sectors of the Nigerian economy.

In 2012, he founded the Agbonjagwe Leemon Ikpea Foundation (ALIF), which aims to benefit humanity through charitable activities like the award of scholarships to indigent students and young persons of school age especially orphans. The ALIF also caters for the sick and aged, promotes youth employment through skills acquisition, ensures easy access to primary health care services for people living in rural communities and empowers widows and rural women with business start-off grants. To ameliorate life’s hardship, it also provides infrastructures like electrification and borehole projects in rural communities within Edo State and beyond. A Justice of Peace, Chief Ikpea was awarded the ‘Sun Newspaper’ Business Person of the Year 2018.