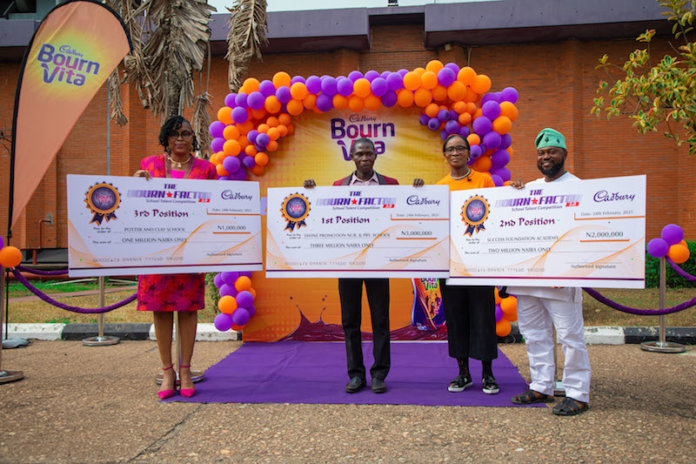 Cadbury Nigeria, a part of Mondelēz International, and producers of the iconic Bournvita, a cocoa beverage drink, has rewarded the top three winning schools in the second edition of the Bourn Factor School Talent Hunt Competition, which took place nationwide, in 2020.

The winners were unveiled at a media parley held at the Company’s head office in Lagos, recently. Divine Promotion Nursery and Primary School in Ile-Ife, Osun State, won the grand prize of N3Million.

During the prize presentation, Mrs. Oyeyimika Adeboye, Managing Director, Cadbury Nigeria, said one of the Company’s values is to “love our consumers and our brands,” adding that the organisation has continued to seek numerous ways to demonstrate this.

“The BournFactor initiative was launched in 2019 to enable children from different primary schools across the country showcase their talents, compete, and win prizes for their schools, while raising money towards a social cause,” she said.

Mrs. Adeboye added that the initiative was in line with the United Nations Sustainable Development Goals (SDGs) that seek to build sustainable communities. “Last year, we worked with the first prize winner to set up an Information and Communication Technology (ICT) facility for their school.

“We helped the second prize winner to renovate their school premises and worked with the third winning school to set up a playground and a borehole.

“This year, we will partner all the three wining schools to achieve their goals, adding that “We will also donate products to orphanages chosen by the winning schools. This will inculcate in the children, the habit of selfless giving.”

Mrs. Adeboye thanked all the schools that participated in the competition and noted that the winners represent millions of talented Nigerian children.

She enjoined teachers and parents to continue to support Nigerian children in nurturing their talents and building their dreams.

Earlier in his remarks, Tolu Olaoye, the Innovations Manager, Cadbury West Africa, expressed delight with the level of participation of the schools, despite the irregularities in school calendars, caused by the COVID-19 pandemic.

“This, for us, is the kind of resilience we are seeking to achieve, teaching the younger ones how to persevere,” he said.

According to the statement, which was issued by Frederick Mordi, the Company’s Corporate Communications and Government Affairs Manager for West Africa, the competition is one of the several brand touch points that Bournvita is using to connect with children across the country.