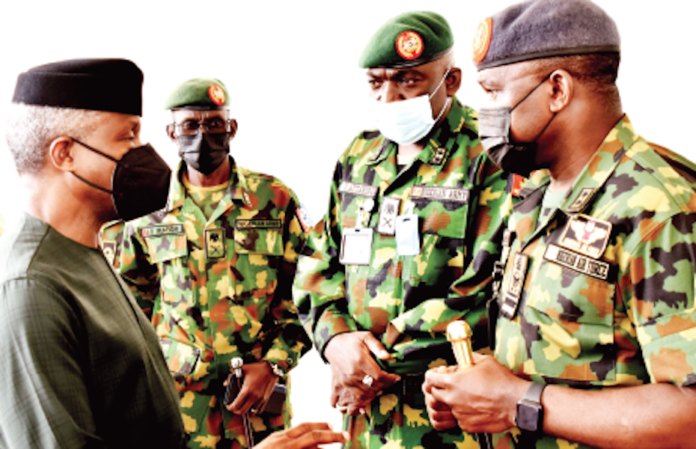 The military yesterday regained control of Dikwa, a rice-cultivating town in Borno State, after a fierce gun battle with Boko Haram insurgents who sacked the town on Monday.

The terrorists were said to have attacked the town, which hosts the United Nations humanitarian activities in the state at 6 pm on Monday, before the military reinforced and dislodged them yesterday afternoon.

However, the UN Resident Humanitarian Coordinator in Nigeria, Mr. Edward Kallon, condemned the attack on the aid facilities, saying the ongoing siege on the town threatened the safety of 100,000 internally displaced persons (IDPs).

The Nigerian Army in a statement by the Director, Army Public Relations, Brig. Gen. Mohammed Yerima, said the insurgents’ attempt at infiltrating Dikwa was foiled by troops.

Yerima said in a statement that the troops of Operation Lafiya Dole routed the Boko Haram terrorists and their Islamic State of West Africa Province (ISWAP) counterparts who attempted to infiltrate and attack Dikwa.

According to him, the terrorist groups stormed the town in an unconfirmed number of gun trucks and motorcycles but were dislodged by troops of 81 Task Force Battalion with reinforcement from other formations of the Nigerian Army and aided by air support of Air Task Force Operation Lafiya Dole.

“The terrorists attempted to invade the town to loot food items and other logistics having got wind of the recent food distribution to residents of the town by the state Governor, Prof. Babagana Zulum.

“They came in their droves through the Marte axis but could not gain access to the town due to the combat readiness of troops who were positioned there,” he added.

He said the terrorists lost the initiative as they were cut off completely following the recent successful recapture of Marte town.

He, however, said in order to scare off residents from returning to their homes, the terrorists planted landmines on the roads, which were also detected and successfully detonated by troops.

He said: “Consequently, the Army Headquarters wishes to debunk the unsubstantiated reports on social media suggesting that the terrorists attacked UN Base in Borno, trapping 25 aid workers as published by some outlets.

“Those false and sensational reports are clearly aimed at stirring up tension in the region and diminishing the glaring efforts and sacrifices of the Nigerian military in the fight against insurgency.”

He said: “There are serious safety concerns for tens of aid workers, including 20 in the humanitarian hub and others in NGO facilities across Dikwa LGA following repeated attacks by Boko Haram.”

The insurgents were said to have entered Dikwa from Marte LGA axis, clashing with military personnel who reportedly withdrew from their base after a one-hour gun duel.

The source added that the insurgents later proceeded to the humanitarian hub firing sporadic gunshots that forced the riot police security at the facility to flee.

It was learnt that when the insurgents invaded the premises, some 20 aid workers and five local security personnel were moved to the bunker where they spent the night.

He said the hub facilities and assets were reportedly damaged by the insurgents who also set ablaze the largest health facility in the town.

He stated that other NGO facilities, including accommodation and offices were also targeted while an unspecified number of staff was feared trapped.

“Although the military deployed additional personnel and assets in the area on the morning of March 2, the clash was still ongoing with civilians caught in a deadly crossfire,” the source added.

It was, however, gathered that the military is gradually gaining ground and have been able to release the aid staff trapped in the bunker and have taken them to military facilities.

Sources within the humanitarian community also told THISDAY that air services (helicopters) by the United Nations into some of the towns of Borno State have been suspended.

The security situation in Dikwa LGA has deteriorated since mid-February when Boko Haram took over neighbouring Marte local government area forcing an influx of nearly 4,000 civilians into Dikwa.

Dikwa had come under direct multiple attacks on February 20, prompting a temporary withdrawal of some aid workers, and the latest attack came barely four days after Governor Babagana Zulum visited the area.

Meanwhile, the Resident and Humanitarian Coordinator of the United Nations in Nigeria, Mr. Edward Kallon, in a statement yesterday, said he was gravely preoccupied by reports of an ongoing violent attack by non-state armed groups on Dikwa, during which aid facilities were directly targeted.

According to him, the attack started on Monday night, adding that the premises of several aid agencies and a hospital were reportedly set ablaze or damaged.

He said: “I strongly condemn the attack and am deeply concerned about the safety and security of civilians in Dikwa, including internally displaced people inside and outside camps and thousands of people who had returned to the community to rebuild their lives after years of displacement.

“This violent attack will affect the support provided to nearly 100,000 people who are desperately in need of humanitarian assistance and protection, particularly as the COVID-19 pandemic risks spreading in Borno State.

“Civilians and aid workers, their facilities and assets should never be a target. They must be protected and respected at all times. I call on all armed parties to immediately stop the violence and respect international humanitarian law and human rights law, and ensure the protection of civilians, humanitarian property and personnel.”