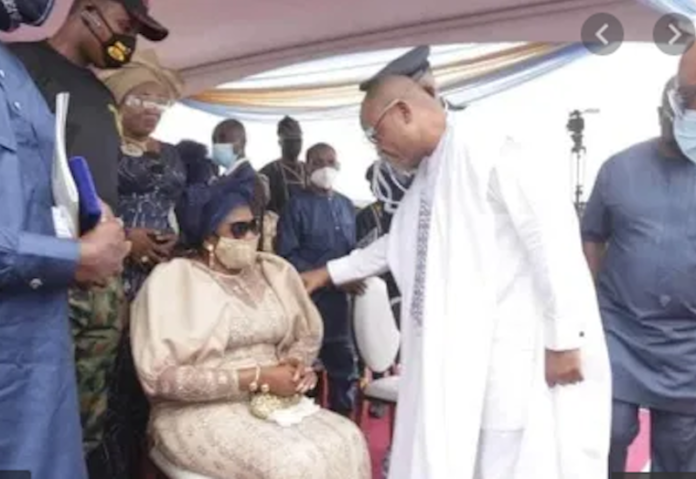 Governor Udom Emmanuel of Akwa Ibom State and the Chief of Air Staff, Air Vice Marshal Oladayo Amao, were among dignitaries who paid tributes yesterday as the remains of the 12th Chief of the Air Staff, Air Marshal Nsikak Eduok, were laid to rest at his country home in Mbak Ekpe on the outskirts of Uyo, Akwa Ibom State.

According to a statement yesterday by the Nigerian Air Force (NAF), the funeral service and interment, held at the weekend, attracted dignitaries and sympathisers from all walks of life.

Eduok died on January 6, 2021, at the age of 73.
Speaking during the burial ceremony, Amao described the late NAF chief as an amiable personality, a man of valour and integrity and a great achiever with an unprecedented drive for success.
“He was a mentor to so many of us both serving and retired. He was one of the best hands in the NAF who steered the tide of the service towards the successes recorded in the past years.

“He changed the landscape of the service and left the scene like a hero while the ovation was still reverberating,” he said.
According to him, Eduok contributed to the development of the NAF.
He said the late CAS was his personal mentor, whom he described as a great fighter pilot whose transformational approach to leadership tremendously impacted on the development of the NAF.
Amao described him as an accommodating air marshal, whose astuteness, diligence and dedication while alive made impacts on “our lives and the NAF as a whole”.

He stated that while serving as the CAS, Eduok relied on his experience to steer the affairs of the NAF.
The feat, he said, ultimately led to the outstanding transformation enjoyed by the service today.
He noted that Eduok was renowned as the first CAS to procure an attack helicopter, which enhanced the offensive capability and operational effectiveness of the NAF.

“A warrior that he was, Air Marshal Eduok saw to the successful conclusion of the National Peace Enforcement efforts in Liberia and Sierra Leone.
“Even in retirement, the late former CAS continued to make invaluable contributions to the development of the service, with significant inputs towards the restructuring of the NAF to make it more effective in dealing with contemporary security challenges facing the country.

“His contributions to NAF operations in pursuit of Nigeria’s national security and stability will forever be remembered,” he added.
While condoling with his immediate family for the loss, Amao said Eduok would be missed for his contributions not just to the NAF and Akwa Ibom State, but also to the country.

The CAS said in honour of his sacrifice to the service and the nation and in recognition of his extraordinary passion for fitness, the Ultra-Fit Gymnasium Centre at the NAF Base, Yola, was named as Air Marshal Nsikak Eduok (retired) to immortalise him.
“To his immediate family as well as the executive governor and good people of Akwa Ibom State, we indeed share in your grief and reassure you of our continuous support in these trying times.

He stated that these events were huge losses to the NAF, Akwa Ibom State and the nation.
“We are however very proud and highly honoured to have worked with your amiable husbands, fathers and illustrious sons,” Amao said.

In his remarks, Emmanuel, expressed a deep sense of loss and grief on behalf of the government and people of Akwa Ibom State, as he bade farewell to Eduok, whom he described as a quintessential Nigerian patriot, a trail-blazer, an epitome of courage and bravery, a decorated air force officer and above all, a husband, father and a devout Christian.

He stated that the late CAS was one of the ambassadors in Akwa Ibom State who epitomised the state’s defining characteristics of duty, honesty, transparency, integrity, love for country and God which he brought to bear in the course of his illustrious career with the NAF, becoming “the first Akwa Ibom indigene to ever occupy that exalted position.”

He said the late CAS, in retirement, chose to relocate to his home state and was a dependable statesman, a voice for reason and moderation whose counsel when sought was always ready and on point.
“Let me end this oration by quoting a line from the 19th Century Unitarian preacher and writer, Minot J. Savage ‘The brave die never, though they sleep in dust. Their courage nerves a thousand living men.”