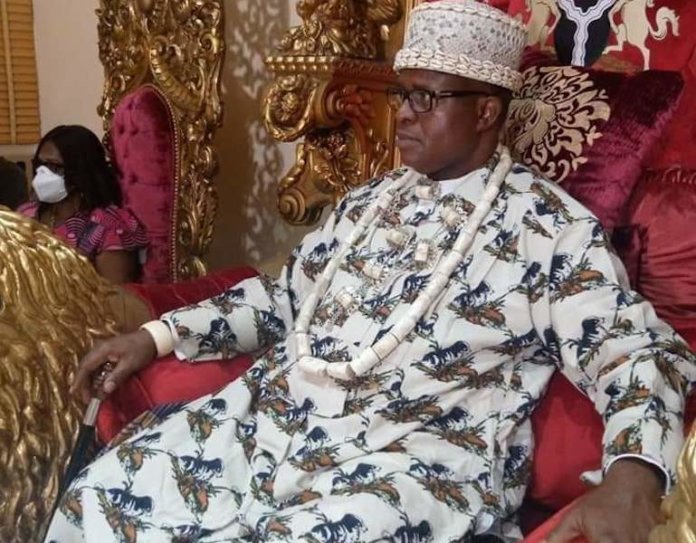 Before now, the non-functionality of the NIN Registration center in Eleme due to damaged equipment had made the centre unable to carry out the registration exercise for residents of Eleme LGA.

King Appolus Chu who is passionate about his people and highly committed to their wellbeing, said that it became an issue of great concern to him when he was informed that his people had to make their way to other Local Government Areas with great difficulty and huge expenses just to get their national Identification Numbers, adding that this made him to reach out to NIMC, Abuja where he was informed that the equipment were out of stock.

“It was the president General of O’Elaobor Eleme Worldwide that communicated with the coordinator of my foundation, Promise Ikarine, through whom I got to know that the machines were spoilt and the officials had already packed out of the kingdom. When he gave me that information, I felt bad about it. After a while again, he reminded me about it, that it is getting worse, that our people are suffering by going to the other LGAs to register for NIN”, HRH Chu recalled.

Worried by the unwholesome situation, which gave HRH Appolus Chu much concern; he had to call the attention of the Local Government council and asked the secretary of the council to try to get across to NIMC, to find out what it took to replace the damaged equipment.

“I sent for a NIMC official in charge of Eleme local Government and she came but said there was nothing they could do except the local Government go out of her way to get the equipment. I consulted with NIMC top management in Abuja and they said they don’t have anyone in stock now and advised that we talked to the dealers which I did and then funded the equipment. They had to supply the equipment to NIMC head office in Abuja after which it was delivered to us here”, Chu said.

The monarch lamented the sufferings associated with accessing the NIN registration in the country, stating that communities and well to do individuals do not need to wait for the government at all times to provide for the people when they have the capacity to, especially as it will reduce the sufferings of the people.

He said the cost of the machine is far more cheaper than the damage the inability to register for NIN will cause on the generality of the people, adding that when his people are not able to carry out any transaction or participate in profiting activities as a result of lack of NIN, it brings them backward in the society and that is why he took the steps to procure the machines for his people.

King Chu further offered the King’s Court in Ogale to be used for the venue of the registration exercise to enable the security and safety of the equipment and officials since the venue is close to the Eleme police station.

Meanwhile the Rivers State Coordinator of National Identity Management Commission Mrs. Amonia Ogenekaro, who represented the Director General of NIMC, Engr. Aliyu Abdulaziz to receive the donation of an all-in-one enrolment system to NIMC by HRH Appolus Chu, stated that their presence has been in Eleme all these years until recently when the systems packed-off and they were unable to continue with registration even after several efforts to repair the machines, adding that the donation of the equipment and hall to them by the king will enable them commence the NIN registration exercise beginning from Monday 1st of March 2021.

She thanked King Chu and further called on the people of Eleme to come out en masse to get their National Identification Numbers from Monday next week.

He narrated that the situation of Eleme got so terrible that he had no option than to engage the local Government council, but it yielded no results until the NIMC state Coordinator informed him that she got a call from Abuja that King Appolus Chu is interested in the procurement of the equipment just about when he was trying to get in touch with the king, who had already made the systems available for the people.