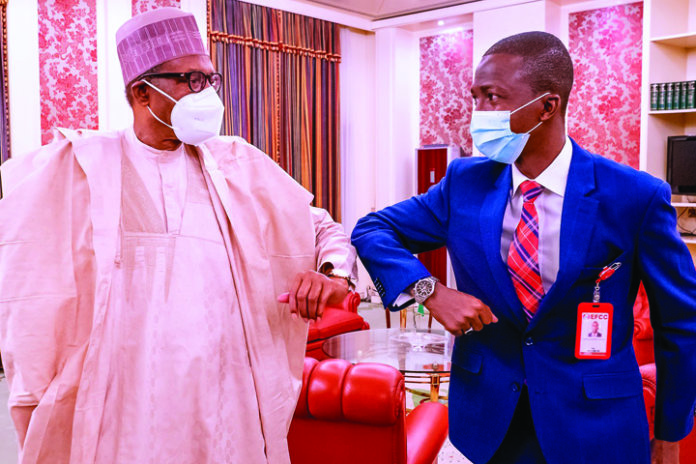 Perhaps, it is safe to presume that with a much cosmopolitan, younger and educated Abdulrasheed Bawa, a new Economic and Financial Crimes Commission might berth soon. But not before satisfying certain tasks, writes Kingsley Nwezeh

Finally, Mr. Abdulrasheed Bawa has emerged the substantive chairman of the Economic and Financial Crimes Commission (EFCC) with his screening and confirmation by the Senate, last week. He is now faced with the arduous task of repositioning and recalibrating the agency’s fledgling anti-graft war.

Imaging the Issues
Since inception, the agency has been beset with issues bordering on poor perception. While it claimed to battle individuals and organisations perpetrating financial crimes, the actions of the former heads of the agency were not so different from those being prosecuted as many of them left office, tarred with the brush of corruption, having been accused of financial crimes while in office.

However, the new helmsman, being a thoroughbred EFCC product and a beneficiary of substantial local and foreign training needs to be above board by proving that he could be different from the rest. He needs not scream, as had been heard in the past, that corruption is fighting back while he’s mired in corruption.

Fixing the Mode of Operation
Bawa’s predecessors especially, the immediate past leadership, was variously accused of engaging in media trial of suspects before the actual court trial.
Justice Gabriel Kolawole of the Federal High Court, Abuja had once berated the commission for engaging in two trials in one, media trial and actual court trial in a case involving some aides of the former National Security Adviser (NSA), Col. Sambo Dasuki.

The judge had suspended the trial of one of the aides, Mr. Nicholas Ashinze, until the commission had put its house in order. This followed reports of the indictment of the accused via a statement issued by the agency. Counsel to Mr. Ashinze, Ernest Nwoye, had protested a press statement issued by the EFCC, in which the defendant was alleged to have been indicted by the court for diverting and misappropriating N36 billion.
Justice Kolawole, in his ruling said, it was unfair for the EFCC, as a complainant in the trial to resort to self-help by engaging the defendant in a media trial and at the same time in a court trial.

“If you want to try the defendant in the media, you have to limit yourself to the media. You have to stop misleading the public in the facts of this trial. “Let me say it for the sake of emphasis that EFCC must stop the use of journalists to distort proceedings in my court. You cannot be engaging in two trials, one in the court and one in the media, at the same time”, he said.

He added: “If you are not satisfied with my decision to stop this trial pending the time the EFCC retracts this offending press statement of my court proceeding, then, you can take your case to another court”.

It had also been alleged that some operatives of the commission sought gratification from suspects involved in high profile cases, failing which a media trial was initiated with statements announcing a future date for the commencement of their trial even when the cases were already long-running cases. Such plans to arraign the suspects suddenly die down and vanish from the media space when the suspects had allegedly “cooperated”.
But the new EFCC chair should be diligent in the conduct of investigation and prosecution of suspects.

Unearthing Terrorism Financing
At a meeting in Maiduguri with bank executives, a former Acting Chairman of the commission, Ibrahim Magu, had lamented the suspected involvement of Non-Governmental Organisations (NGOs) in terror financing. He wondered why one NGO would have 40 bank accounts. Speaking at a meeting with banks’ compliance officers in Maiduguri, Magu queried the rationale behind a single NGO keeping 40 bank accounts.
“Nobody should carry cash above the threshold of N10 million for corporate organisations and N5 million for individuals. Anything above the threshold must be routed through financial institutions,” he said.

Magu further stated that, “We must profile all the NGOs in the North East. I don’t know why an NGO will open more than 40 bank accounts. We are going to ask your various banks to give us statements of accounts for each and every NGO.
“The issue of money laundering, terrorist financing and leakage of information will be eliminated by the commission with the help of bankers across the country.”

Curiously, no further step had since been taken after the meeting and no official position established by the agency on the matter. With the devastating impact of terrorism and armed banditry sustained through illicit financing channels in the country, the new EFCC chair would need to move fast in this regard.

The Police Staffing Debate
With about 2,196 staff out of which 850 are policemen, Mr. Abdulrasheed Bawa would have to determine the fate of police personnel deployed to the agency.
Will his emergence as a non-police officer mean that he would dispense with the services of the officers? Will he raise a new set of personnel that are solely products of the EFCC academy by embarking on fresh recruitment and the attendant funding challenges? A senior police source that spoke to THISDAY, last week, said Bawa would determine the fate of the police personnel in the agency and other personnel decisions.

Funding and Salary Matters
The anti-graft agency has, like most federal agencies, faced the challenge of poor funding and a remuneration package that might not discourage detectives from seeking alternative source of funding in view of the entrenched corrupt forces they contend with daily.
There were allegations in the past that when banks report illicit payments into bank accounts with a request for the agency to look into it, some operatives requested for illicit percentage payment/deductions before evacuating the funds.

THISDAY Checks have shown that the salary scale of an entry-level staff with the EFCC is about N158,000 while the average salary of EFCC workers is N201,000 monthly. The salary of a Deputy Detective is put at N245,000.
But the salary scale depicts a wide gap with what the commission budgets and the releases acknowledged by the commission during its 2021 budget defence presentation at the National Assembly.

Presenting the budget to Senate Committee on Anti-corruption and Financial Crimes, headed by Senator Abdul Kwari, the then Acting Chairman of the Commission, Mohammed Umar Abba, gave an overview of the performance of the Commission’s 2020 budget. He disclosed that of the total of N32.694 billion, appropriated for the commission in the current year, N25.136billion, representing 76.88 per cent had so far been released.

A breakdown of the figure shows that N21.398 billion was released as personnel cost, N2.100 billion for overhead and N1.638 billion for capital projects.
Abba further disclosed that N18.823 billion, representing 74.88 per cent of the N25.136 billion released was fully utilised.
The Abdulrasheed Bawa-led agency should find it necessary to brief the nation on the full details of its budget implementation as a mark of transparency for an anti-graft agency.

That Malami-Bawa Connection
Beyond the allegation of sales of 224 forfeited trucks to proxies in Port Harcourt to which the EFCC vigorously defended him, Bawa Abdulrasheed would need to prove to Nigerians that the position of the Chairman of the Presidential Advisory Committee Against Corruption (PACAC), Professor Itse Sagay, that the Attorney-General of the Federation (AGF) and Minister of Justice, Abubakar Malami (SAN), having influenced his appointment, being from the same state and a relation, that he would not operate under his wings.

Sagay in a media interview said: “This issue is a very big question, because I noticed that they both come from the same state of Kebbi and they may even be related. For me, that is not a very healthy thing because the chairman of the EFCC and the EFCC are supposed to be independent.
“They are not politicians, they are trained security officers. The attorney-general is a politician, who has all the weaknesses and loads of a politician”.

“He has already indicated his tendency to interfere in both the EFCC and the ICPC with the regulations he purported to make months ago. So, I am not comfortable at all that the possibility that they might be related.”
But, generally speaking, Bawa is expected to bring his youthful energy and rich as well as rare experience of local and foreign trainings to bear on his leadership of the agency.