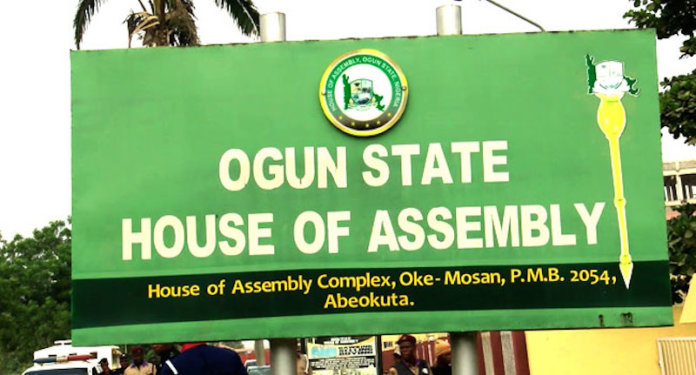 The Osoedu family in Okerala village, near Simawa, in Sagamu Local Government area of Ogun State, has accused the Ogun State House of Assembly of meddlesomeness in its land affairs.

It also alleged that the community’s traditional ruler, the Oniraniken of Iraniken, Sagamu, Oba Adewale Adeniji, was almost arrested recently, on the orders of some lawmakers.

The family, at a news conference in Iperu-Remo, has urged the Ogun Assembly to stop forthwith, its investigation into the family’s disputed farmland measuring 4,511 acres.

The family made the appeal through its counsel, Mr. Kole Oyedele, at the conference attended by Oba Adeniji, and other prominent leaders of the clan.

Oyedele said his clients had not only obtained a valid Ogun State High Court judgement dated 18th of April, 2018 affirming their ownership of the family land, but that there were also about six pending court cases on the same subject matter.

He explained that the position of the law is that when matters are before the court of law, such are not to be adjudicated upon by any party, and that interference by the Ogun Assembly is not only subjudice but also contemptuous and punishable under the law.

“The judgement was pronounced against the adverse possessors, the trespassers on their family land. Among other orders of the court, a perpetual injunction was issued against the defendant and the family was given customary right of occupancy of the expanse of farmland.

“Shortly afterwards too, the defendant in the suit filed an application to set aside the judgement and on the 14th day of January, 2020, the Ogun State High Court, sitting in Sagamu, dismissed the application and by so doing, reaffirmed the judgement of the honourable court as pronounced in favour of my client,” Oyedele recalled.

He said based on that judgment, the deputy sheriff of Ogun State, with the support of the Commissioner of Police, enforced the court verdict and the family was “issued with the writ of execution and writ of possession”.

The counsel, therefore, wondered why the Ogun House of Assembly thereafter summoned Oba Adeniji via a letter dated December 5, 2020 asking him to appear before the House Committee on Lands, based on a petition written by one Waheed Sodiya, Baale of Kanuyi alleging among other things, that the traditional ruler had been using landgrabbers to take possession of the family farmland under dispute.

“What they are trying to do is to deprive my client, the Osiedu descendant’s family, the benefit of that judgement. The State House of Assembly doesn’t have the power to adjudicate over private lands.

“A family land is a customary land which belongs to a family and the House of Assembly doesn’t have power over that, as only the court can adjudicate,” he stressed.

On the occasion, some of the community’s leaders in separate interviews with THISDAY, also alleged that some armed, riot policemen were stationed in the assembly premises to arrest Oba Adeniji, the day he came to honor the assembly’s summons.

“But by the grace of God, we found a way of taking Kabiyesi (our monarch) away,” a community leader, who spoke under anonymity, told THISDAY.

The source claimed to have been hinted that two powerful lawmakers were interested in buying up parts of the contested land.

His personal assistant, however sent a terse message which read: “Oga said their (Osoedu’family) file just arrived on his table and that he was yet to treat it; and so, an interface or any clash with them does not exist.”