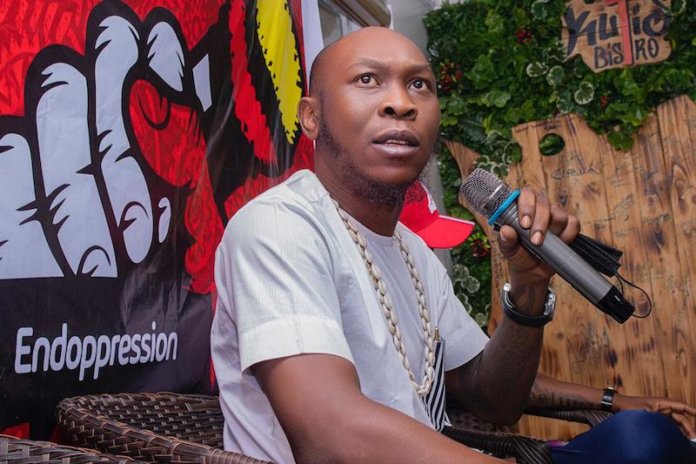 The newly-launched “Power Mic” by the Afrobeat musician and activist, Seun Anikulapo-Kuti, sets the stage for Nigerians, especially the creatives, to express their consciousness in varying art forms. Yinka Olatunbosun and Chris Paul report

Call him a chip off the old block, Seun Anikulapo-Kuti is a restless creative that has been very vocal about human rights throughout his musical career. His father, the legendary Afrobeat founder, FelaAnikulapo-Kuti had laid the foundation for music activism with his records and life, albeit controversial. But more importantly, Felaformed his own political party, Movement of the People (MOP) when he became disenchanted by political system in Nigeria some years after the Nigerian civil war.

Nigeria had been divided along ethnic and religious lines and Fela’s Party was meant to unite the people against oppressive government. Instead of gaining the freedom he sought, Fela’s life became tumultuous as soon as his music became more politically-charged. With years of arrests, battery, detentions culminating in illness, Fela finally died in 1997.

Seun, the last son of Fela, has since carried on the legacy of the struggle lyrically and verbally from the social media to the streets and then back to stage and in the recording studio. Five months after the widely publicized EndSARS protest, he launched the “PowerMic” initiative in Lagos preceding with a video post on Instagram, with the backdrop of the Marxist revolutionary, Che Guevara.

“The people are not tired,’’ he began. “They want things to change definitely. We are at the point where we need to politicize our voices. We don’t protest just because it is fun to protest or we don’t have other things to do with our time. There are lots of things that are killing Nigerians. EndSARS is the slogan but it is not our mission. Nigeria is a country where the minimum wage is less than the cost of a bag of rice. The solution to Nigeria’s problem is with the people, their mind and their voice.

“The first Power Mic will be held in Shrine today because Shrine is a symbolic location of African liberation. And for two minutes only, you can express yourself on why you are protesting. You can do it through a song, dance, drama skit, comedy, action, speech, poem and whatever you do. Everything will be recorded on video because they must hear the people. This is the liberation generation. All the recordings will make part of a political document. Power Mic is a political front.”

Power Mic which was launched on February 20 at Bistro Hangout, Ikeja is set to be an on-going series which will move from city to city. Done in collaboration with the Naija Resistance Movement (NRM) and Movement of The People (MOP), the Power Mic Event is designed to sustain the consciousness achieved by the EndSARSwhich caught the attention of the international media in 2020. In 2017, EndSARS emerged as a popular hashtag on Twitter to draw attention to the gross human rights violation from the Special Anti-Robbery Squad Unit (SARS) unit of the Nigeria Police.

In October 2020, the hashtag resurfaced owing to more bizarre news of police brutality. Over 28 million tweets were recorded for the hashtag on Twitter alone and millions more on other social media networks. There were also hundreds of solidary protests by Nigerians in diaspora with some foreign nationals and celebrities joining their voices to the movement. However, many believed there should be alternative methods to protests and boycotts following the incident on the evening of October 20 at the Lekki Tollgate.

NRM, set up to start a dialogue within the political class and the grassroots is manifested in the framework of Power Mic. It is expected that the Power Mic will go to the people, their workplace or neighbourhood. Also at the media briefing to launch Power Mic was the rapper, actor and activist, Olanrewaju Ogunmefun otherwise known as Vector tha Viper. He founded Consciousness Cruise, a parallel movement and explained the rationale behind it.

Like Consciousness Cruise, Power Mic has the objective of restoring the honor and dignity of the oppressed Nigerian. Although Falz was unavoidably absent from the event, the launch also had in attendance Comrade Sheni Ajayi.

It was argued that in spite of the merits of protests, they do not always seek to end the problems in a manner that constructively allows the state to engage the issue. In a statement issued Seun’sCommunications Manager, Ayo Moses Ogedengbe, Power MIC was designed with a view to achieve Dialogue, Solidarity and action from the people to bridge the engagement gap between “Youth 1” and “Youth 2” that is professional groups and artisan groups respectively and create room for dialogue.

Vector also added that one of the core strategies of the movement will entail reaching the minds of the oppressed Nigerian to reawaken their sense of self-worth.