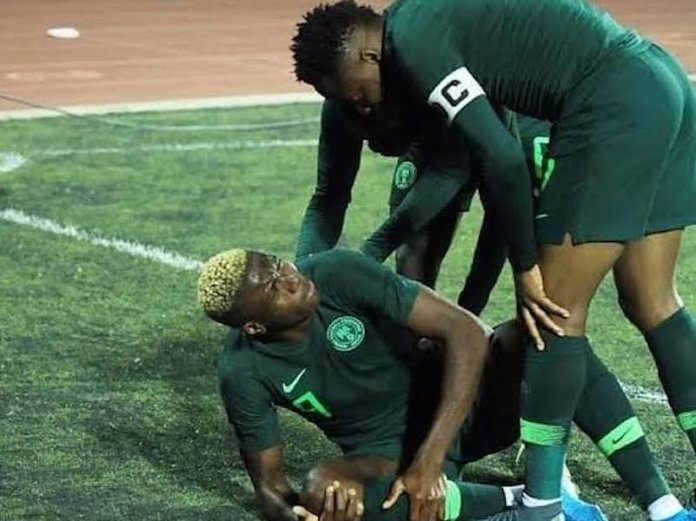 Super Eagles Head Coach, Gernot Rohr, has alleviated fears over the fitness of Victor Osimhen after the Napoli striker was knocked unconscious during the final minutes of Sunday’s Italian serie A match at Atalanta.

The 22-year-old was stretchered off the pitch and rushed to hospital in northern Italy after he fell awkwardly and hit his head on the ground, following a collision with Atalanta defender Cristian Romero.

After spending the night under observation and undergone multiple tests, Osimhen returned to Naples on Monday.

Rohr, who is expected to name him in his squad for next month’s crucial final two 2021 Africa Cup of Nations qualifiers, is hopeful he will return to action soon.

“I spoke to Victor, he told me he’s physically and mentally okay now but must wait for the club doctors,” Rohr confirmed to BBC Sports Africa yesterday.

“My thoughts are with him because he’s had some difficult start in Italy, but he’s a strong boy and he must wait for the doctors to clear him to play again.

“He’s an important player for us and we’ll see how it goes at his club first, because his well-being is very important for everyone.”

A Napoli club statement read: “Victor Osimhen underwent further tests, with all coming back negative. The striker will now rest for a period of a few days before gradually returning to training. His condition will be monitored on a daily basis.”

Nigeria’s Super Eagles who were third at the last Nations Cup in Egypt, still need two points from their final qualifiers at home to Benin and then away to Lesotho to confirm a spot at the next tournament in Cameroon.

Osimhen, who joined Napoli from Lille at the end of Julyin a deal reportedly worth more than $96m, only returned to action in late January after being sidelined for over two months.

His previous lay-off was due to a shoulder injury suffered on international duty with Nigeria in November and he then tested positive for coronavirus over the winter break.

The 2015 U-17 World Cup winner with the Golden Eaglets in Chile who has scored just two goals for the Italian club, is not part of Napoli’s preparations for the second leg of their Europa League round of 32 tie against Granada tonight.

Last season was a breakthrough one for the winner of the 2020 Marc-Vivien Foe awardfor the best African player in France’s Ligue 1.

He moved to southern Italy after scoring 18 goals in all competitions for Lille in his solitary campaign in French football.

Ahead of the final two 2021 Nations Cup qualifiers Osimhen is the overall top scorer with four goals, he has scored five times and provided four assists in nine appearances for Nigeria at senior level.

He burst into the spotlight when he clinched the Golden Boot and Silver Ball awards as he steered the Golden Eaglets to the U-17 World Cup title.

The then-16-year-old scored a tournament record 10 goals, netting in every one of Nigeria’s games, in a performance that helped earn him Africa’s Youth Player of the Year award for 2015.