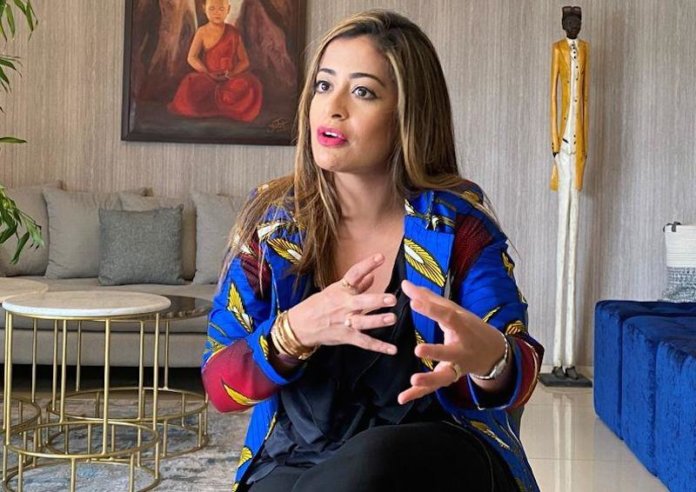 According to the Director of the new movie ‘Namaste Wahala’ “I am very excited about Namaste Wahala going to the whole world through Netflix. The movie showcases the beauty of Nigeria and the wealth in Nollywood”.

Hamisha Daryani-Ahuja, a Nigerian of third generational Indian descent who also double as the Executive Producer went on to tell the press and movie lovers that “It was amazing to see how beautifully two cultures which I hold very close to my heart came together in this fusion movie.”

Namaste Wahala is a cross-cultural love story involving Didi a young Nigerian lady lawyer/social worker interpreted by Ini Dima-Okonjie and Raj, a young Indian investment banker acted by Ruslaan Mumtaz. Their romantic fraternity faced serious objection from both corners of their parents because of cultural variations, but in the end had a good Indian-Nigerian wedding.

It was Namaste Wahala this and that, on Nigerian social media airspace creating a buzz. I did not want to be that Nigerian that would carry last, I rejected the counsel of that little child in the viral video to be calming down and glory to internet I did the needful.

The storyline is good, right costumes and good interpretation of roles, above all one can’t miss the humor in the movie. It reminds me of the movie ‘Mississippi Masala’ where Indian parents couldn’t come to terms with the fact that their daughter was in love with a black guy.

In Namaste Wahala too, Didi’s father acted by our one and only evergreen RMD struggled to accept that, since he preferred his young Nigerian employee to marry his daughter, just like it was difficult for Raj’s mother Meera acted by Bollywood’s Sujata Segal. Raj’s father was mild about it, and Didi’s mother, our adorable favourite Joke Silva didn’t take it too hard like her husband since she a Yoruba married an Igbo man and was aware of the struggles of inter-cultural marriages.

From the acting point of view, they struggled to get into the grove in the beginning of the movie. The actors appeared a little tensed in the movie, a more seamless displace and interpretation could have been better without trying to appear too Bollywood and Nollywood since the whole world is watching; the point is to tell a Nigerian and Indian story but it must be acted to appear normal and appealing to a global audience. I love the performance of the driver who picked Raj’s mum at the airport to Victoria Island in Lagos, I enjoyed Sujata and Anee Icha’s interpretation of roles.

I hope the fusion and coming together of Bollywood and Nollywood grow bigger in terms of technical exchange, endorsements, enlargement of audience and fan base, especially in favour of Nigerian actors since Bollywood is worth 183 billion Indian Rupees, that’s $2.52 billion with 3.6 billion viewing audience globally compared to N87 billion that Nollywood generated in 2019 and accounted for 0.27% of Nigeria’s GDP, with Nigerian average actors earning as low as N199,000 to N597,000 per film.

The fundamental message in Namaste Wahala is about racial and cultural integration, inclusion and unity. As Crystal award winner Olafur Eliasson captured it, “Art does not show people what to do, yet engaging with a good work of art can connect you to your senses, body and mind, it can make the world felt and this felt feeling may spur thinking, engagement and even action”. In this time when the world is struggling with racial crisis like #Blacklivesmatter, and centrifugal forces like religion, ethnicity and politics pulling Nigeria in different directions. One hopes Namaste Wahala will be that work of art that will spur people to think, engage and act to embrace unity and peace.

By and large Namaste Wahala is a good movie by all standards and it is streaming live and trending on the top 10 movies on Netflix. This is fresh air for Nigeria that has been trending globally in place of insecurity and bloodletting.