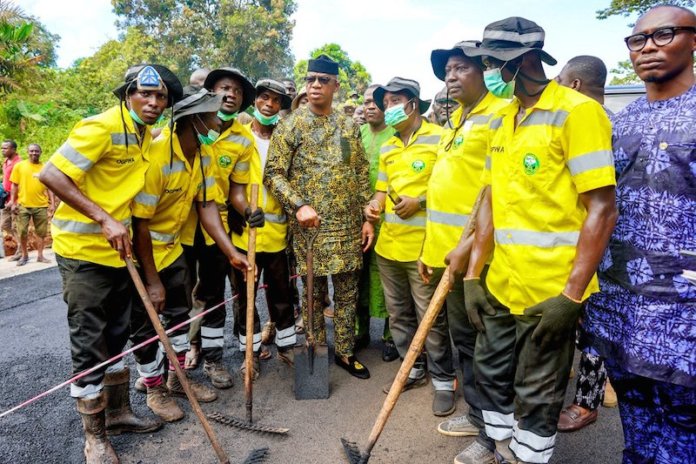 The approval and award of contract for the reconstruction of Journalists’ Estate Road, Arepo, by the current Ogun State government, under the able leadership of Governor Dapo Abiodun, comes with high enthusiasm and laudation.

The first construction of the road from the Lagos-Ibadan Expressway to the estate was done by former governor Gbenga Daniel. The road became bad few years after, due to imperfect work and no drainage done by the contractor.

During the administration of former Governor Ibikunle Amosun, the reconstruction of the road was equally awarded to a contractor but was not executed, for reasons best known to both the Amosun administration and the contractor. The road became a nightmare to the teaming population of Arepo community, especially during raining seasons.

As at today, apart from the flagship Journalists’ Estate, there are over 20 other adjoining estates, whose population is growing exponentially, which has become an asset to any discerning politician. Perhaps, Governor Abiodun, in fulfilling his campaign promises to the citizens, has commendably seized the opportunity to identify with the infrastructural development of the Journalists’ Estate and Arepo writ large, first with this modern road.

According to the Commissioner for Works and Infrastructure, Mr. Ade Akinsanya, “this is a high priority project and has a nine months construction period. The 2.35km road which is 13 metres wide, 1m by 1m covered reinforced drainage and stone pavement when completed, would be fully illuminated with street light, lay byes, and other exotic road furniture”.

The commissioner assured that Governor Abiodun prioritized the road project because when completed it would provide relief for the road users, especially during raining seasons.

This is democracy with human face. Governor Abiodun deserves accolades for this project that was neglected and abandoned by his predecessor.

The Journalists Estate Residents Development Association (JERDA), comprising Journalists from almost all media houses in Nigeria and other residents, are appreciative of this gesture, and would support him to succeed, and like Oliver Twist, believe that this partnership would bring more other developmental projects to Arepo as a whole. For example, a pedestrian overhead bridge across the Lagos – Ibadan Expressway to Arepo bus stop will be needed to avoid unnecessary accidents /deaths.

When the history of the Journalists’ Estate development is written, his name will be etched in gold as a partner and mentor with Journalists’ welfare. With this project, the governor can count on the support of the large Arepo community for his second term in office.

The history would also be very kind to former Governor Olusegun Osoba, during whose tenure the first in Africa Journalists’ Estate was established by Journalists. The veteran Journalist former governor gave all the needed support for the estate.

The philosophy behind the establishment is to give a befitting communal place of residence for the Journalists, who are members of the Fourth Estate of the Realm. It is a legacy estate, first of its kind in Africa. As a result of this pioneer estate, many Journalists have become property owners. Other non-Journalists have also been attracted to the estate, which has enhanced the value of the property in the estate and the Arepo town in general.

To underscore the importance which politicians and other corporate individuals attach to this Journalists’ haven, the estate has played host to former President Olusegun Obasanjo, ministers, governors, corporate icons among others.

To preserve the identity and legacy of the “Journalists’ Estate”, the position of Chairman, Vice Chairman and Secretary are exclusive for Journalists as enshrined in the registered JERDA constitution. The name of the estate is also sacrosanct as “Journalists’ Estate”. There is phase 1 and phase 2 of the estate. Other emblems denoting the estate are names of notable media houses in the country. Names like THISDAY Avenue, Guardian, Punch, TheNews, AIT, Vanguard, The Nation are streets names, among others.