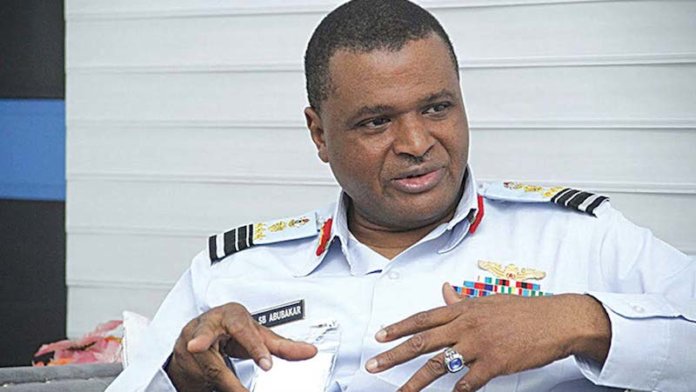 I am told that in the military, it is sacrilegious to write the testimonial of your senior. So I am inclined to believe that if there were no exceptions to that rule, Nigeria’s new Chief of the Air Staff, Air Vice Marshal Isiaka Oladayo Amao would not have said what was credited to him, on the occasion of his takeover of the helmsmanship of the Nigerian Air Force, NAF from his predecessor, Air Marshal Sadique Baba Abubakar.

On that occasion, referring to Abubakar, Amao said: “Let me specially thank the outgone Air Chief for his unprecedented and exemplary leadership throughout his tenure. Sir, you have no doubt left indelible marks in the sands of time”. Not to leave anyone in doubt about the “indelible marks”, the new Air Chief who insiders describe as a thorough straight talker and strategist said: “Your undeniable drive for human capacity building, infrastructural development, research and development, amongst others, is a testament to your desire for a better NAF”.

From my personal knowledge of SBA, I can say, without equivocation, that the trail-blazing legacy that he has bequeathed to the Nigerian Air Force, a legacy that has been confirmed by the new Air Chief, calls for nothing short of public applause. Unless, perhaps, we are setting standards for the former Air Chief that are quite different from the standard criteria by which a public officer of his rank would, ordinarily, be assessed.

SBA will be remembered for many praiseworthy reasons. As Air Chief Amao mentioned, top on the list of his landmark accomplishments, was the unprecedented impetus he gave to research and development, R&D. Incidentally, it was in the course of researching, into the new ferment in R&D, under SBA’s leadership, that I came into contact with him, about four years ago.

Though a former Chief of the Air Staff, Air Marshal Paul Dike is reputed to have lit the flame of R&D, it is common knowledge that the SBA era marked the critical watershed, in raising R&D to something of a service mantra. Reputed for his frugality and obsession with indigenous technological capacity, NAF officers would regale you with how, under SBA, the various unserviceable fighter aircraft and other equipment were resuscitated, using improvisations by the R&D department. It is to his credit that renewed firepower, of the Abubakar-era NAF, accounted greatly for the successes recorded between 2015 and 2017, in substantially degrading the capacity of Boko Haram, to hold large swathes of North East Territory of Nigeria. But that is only a tip of the iceberg, of the achievements of this fine officer and gentleman.

Under him, the equipment inventory of the NAF took a giant leap. In an unprecedented move, the Federal Government acquired 23 brand new aircraft to boost training and combat readiness of the Air Force. The inventory included 10 Super Mushshak trainer aircraft, five new Mi-35 helicopter gunships, 2 Bell 412 helicopters, 4 Augusta 109 Power attack helicopters and 2 Mi-171E helicopter. These are besides the 15 additional aircraft already ordered by the Federal Government and awaiting delivery before the retirement of Air Marshal Sadique Abubakar.

Training and retraining were escalated to unprecedented levels. Staff welfare in the areas of healthcare, housing and educational facilities, were so upscaled that service personnel threw their heads and hearts, into the task of providing the much-needed air cover without which it would have been near impossible to effectively degrade Boko Haram. That there were never threats of mutiny by NAF personnel or lamentations by SBA, over the conduct of his officers, stand out as clear evidence that he ran a highly motivated force.

Available evidence is also clear that the former Air Chief bequeathed to the Service, a legacy of diversity management and inclusion: Under SBA, the Nigerian Air Force winged about 131 pilots, including five new female pilots; among whom are the first female fixed-wing fighter pilot, Flying Officer Kafayat Sanni, as well as the first and second Nigerian Air Force combat helicopter pilots, Flying Officer Tolupe Arotile and Chinelo Nwokoye. Sadly, Arotile died in a freak accident in July last year that ignited widespread anger and grief.

For anyone genuinely interested in how to break the dependency of Nigeria on foreign support for fleet maintenance, the Sadique Abubakar era provided the springboard for the first decisive step towards some self-reliance. Under him, Nigeria was able to achieve 78-82 percent of in-country serviceability status of “operable aircraft” as over 20 previously grounded aircraft were reactivated. The savings in foreign exchange, by that singular achievement, pale into insignificance against the beneficial impact on combat readiness of aircraft and the long-term prospects of achieving autarky in equipment maintenance and national pride. Thus, for the first time, the NAF, under SBA, achieved multiple in-country periodic depot maintenance (which also involved avionics upgrade) of three of its platforms-the C130H, the Alpha Jet and the L-39 aircraft, in three different locations in the country.

Of great strategic significance, SBA’s unrelenting commitment to Service excellence, culminated in an avalanche of doctrinal changes, the principal of which was the creation of the NAF Special Operations Command. The new command, with headquarters in Bauchi, is charged with the responsibility of timely deployment of air power not only to degrade subversive elements but to effectively guard NAF assets and other strategic national assets, wherever they may be located.

Also noteworthy is that, more than under any other era, SBA’s period ushered in a new dimension in civil-military relations. Civilians in many NAF locations will remember him as the leader who, by creating unfettered access to NAF resources such as medical and educational infrastructure, introduced a new and beneficial paradigm in civil military relations. Like their military counterparts, civilian families in Port Harcourt and Bauchi all have ready access to the reference hospitals in the two state capitals. Similarly, from the initial sole cancer screening centre in Abuja, by the time of SBA’s retirement, four additional cancer screening centres had been established in NAF locations namely: Maiduguri, Makurdi, Kaduna and Bauchi.

SBA will also be fondly remembered by Nigeria’s academic community. In his persistent search for fruitful collaborations in R&D, under him, the Service signed Memoranda of Understanding with at least eighteen institutions of higher learning and research institutes. While some people could sign such MOUs for the fun of it, SBA’s vision was to stimulate practical R&D synergy with demonstrable technical results, between the NAF and higher institutions and research centres. He succeeded. At the Ahmadu Bello University (ABU) Zaria, Abubakar Tafawa Balewa University (ATBU) Bauchi and the University of Maiduguri, my colleague Ibrahim Biu and I could not but marvel at the beneficial results of these collaborations.

It is all too obvious that some of the people who have called for SBA’s head, as part of a general phobia against the military high command, are oblivious of the landmark achievements recorded by the NAF under his result-oriented leadership. As someone who is familiar with the zeal, commitment and enterprise of SBA, I feel deeply worried that a good man is being thrown away with the bath water; that a patriotic Nigerian whose enterprise and contributions have placed the Nigerian Air Force on a sure-footed pedestal, to soar to greater heights of achievement, is being mistakenly taken out of the sky without the benefit of a parachute.

It is gratifying to note that the officers and men, he has left behind, do not share the cynicism of his critics. If anything, as his successor, Air Vice Marshal Amao, has correctly stated above, they hold him up as emblematic of the renaissance era of the Service.

By all standards, Sadique Baba Abubakar can hold his head high, that he gave honest service to people and country and left some trail-blazing footprints that might take some time to either equal or surpass. I am happy that Air Chief Amao has pledged to consolidate on the good work of his predecessor for a better Nigerian Air Force. I am even the more excited that CAS emeritus Sadique Abubakar has been nominated for confirmation as a non-career ambassador. It is my hope and prayer that the Senate will not hesitate in confirming him.

*Emma Agu is a former Managing Director of Champion Newspaper