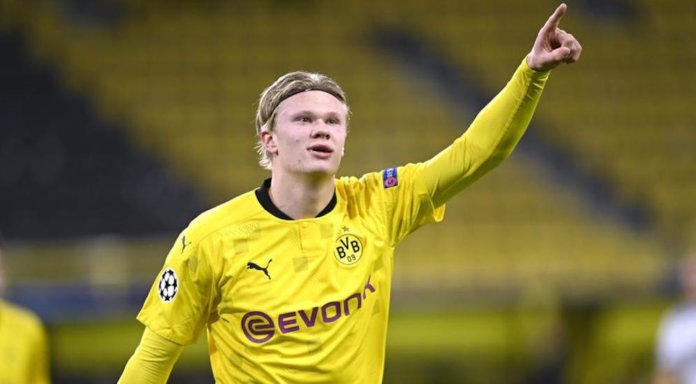 “We just have to stick to the match plan and try to perform,” Haaland told Sky Sports on Tuesday.

“Sevilla are a strong team. We just have to find our form again and do our best on the pitch to have a chance.

“If we play like we did in the last few games, we have no chance,” Haaland warned with Dortmund having won just three of their last eight games in all competitions.

Dortmund’s fortunes have nosedived since Axel Witsel’s strike sealed a 2-1 win at Zenit St Petersburg last December to confirm the Germans as winners of their Champions League group.

Joy at reaching the last 16 was dampened four days later when Dortmund’s defensive weaknesses were brutally exposed in a 5-1 thrashing at home to Stuttgart.

Lucien Favre was sacked as head coach the following day.

His assistant, the 38-year-old Edin Terzic, was promoted to interim coach until the end of the season, but results have not improved of late.

On Monday, it was announced that Borussia Moenchengladbach’s highly sought-after coach Marco Rose will take charge at Dortmund next season.

The 44-year-old will be tasked with re-establishing Dortmund as the second power in German football behind Bayern Munich.

Dortmund have picked up only 14 league points from a possible 30 since Terzic replaced Favre.

It took a late Haaland goal, his 23rd in as many games this season, to avert defeat in a 2-2 draw at mid-table Hoffenheim last Saturday.

The result left Dortmund sixth in the Bundesliga table and they are now 16 points behind leaders Bayern Munich. It took another Haaland goal for Dortmund to beat second-division Paderborn 3-2 after extra time in the last 16 of the German Cup earlier this month.

In contrast, Sevilla have won all of their last nine games, including a 2-0 win over Barcelona in the semifinal of the Spanish Cup.

“They have scored twice as many goals as they have conceded, they have outstanding players in attack and defence,” warned Terzic.

“If you compare form, Sevilla have a clear advantage, but the next round is our clear goal.”

Morale has been low since a 2-1 league defeat to Freiburg 10 days ago – Dortmund’s first loss against the club from Germany’s Black Forest for more than a decade.

“Mistakes were made again that should not have happened,” fumed Terzic, a verdict which could also apply to each of Dortmund’s eight league defeats in 2020/21 – one more than the whole of last season.

While Haaland and England winger Jadon Sancho netted last Saturday, neither has been able to find the consistent form to drag Dortmund out of their lull.

Club captain Marco Reus was so poor against Freiburg that he was only a second-half replacement against Hoffenheim.

Dortmund’s main concern is the fact they are currently six points from the Bundesliga’s Champions League places.

Dortmund would stand to lose 30 million euros ($36 million) if they fail to qualify for next season’s group stages.