Video: Tweeting from the Gym, Tinubu Says ‘I’m Strong, Healthy, Ready to Serve from Day One’ 32 mins ago 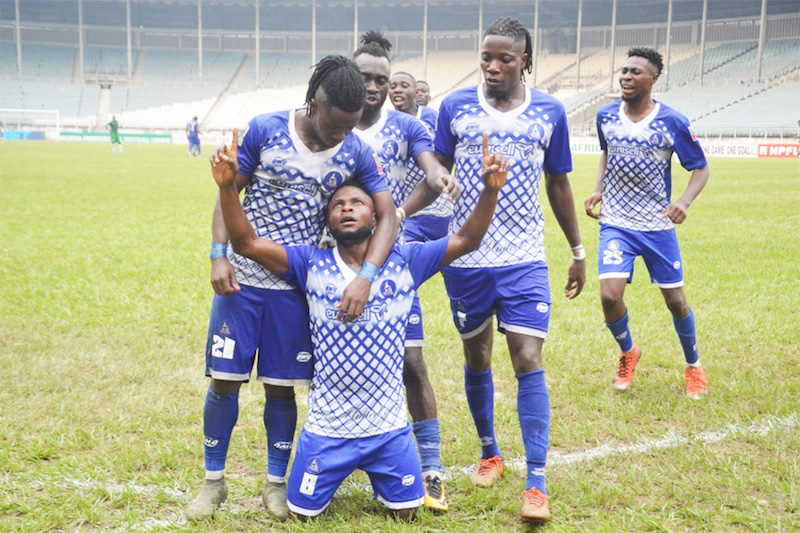 These rivals tend to put every happening around them aside and throw everything to games that pit them together.

Players’ movements across these teams are also accompanied by resentment from fans of the departing club, fuelling the tension among both groups when and where their paths cross again.

For Enyimba FC of Aba, two-time African Champions League winners and Rivers United of Port Harcourt (formerly Dolphins), there has been a good dose of rivalry for the past two decades during which they consistently played in Nigeria’s top flight league.

Within that period, both teams have enjoyed domestic successes, famous continental recognition, contested gruelling fixtures, seen players cross from one team to the other and even managers alike; but these have seemingly gone unacknowledged in terms of articulated football rivalries.

In actual fact, Abia and Rivers states share boundaries. They are however not just bound by these boundaries but witness plenty of socio-economic interactions on a daily basis with the Port Harcourt-Aba Road one of the busiest in the country in terms of influx of traders and commuters day and night.

To put it in proper perspective, billions of Naira are interacted between Port Harcourt and Aba, one of Nigeria’s commercial hub on a daily basis and the proximity of both cities has been a major factor. Traders board vehicles for as low as N700 these days to prosecute the journey that has turned to a little over two hours now due to the state of the roads.

Indeed, as someone quipped recently; Aba is the Mainland, while Port Harcourt is the Island (in mild reference to Lagos City division).

On the football pitch, Enyimba and Dolphins (now Rivers United) were the biggest names in Nigerian football in the early 2000s with both clubs dominating the league and Cup competitions.

While Enyimba won the league three times in a row from 2001-2003, Dolphins took over the baton by winning league and Cup double in 2004 and reached the final of the CAF Confederation Cup in 2005.

As years go by, these teams continued in their consistent level of participation with Rivers United, especially attracting players from Enyimba into their fold, often tempting them with the riches of the fabled Garden City and an opportunity to challenge the growing supremacy of the People’s Elephant.

In the past five years alone, Rivers United have signed renowned league stars like Markson Ojobo, Nzube Anaezemba, Ugochukwu Leonard and Chinonso Okonkwo directly from Enyimba even before the much publicised transfer of Ifeanyi Anaemena and Theophilus Afelokhai last year.

Enyimba and Rivers United go toe-to-toe on Sunday in the next instalment of their unsung rivalry but on a bigger scale this time; the Total CAF Confederation Cup. Both teams were involved in a mini battle at the abrupt end of last season over which team goes to the CAF Champions League or the Confederation Cup with United unwilling to accept the Points Per Game (PPG) tie-breaking explanation.

Victor Okemka Ezeji is a legend of the Nigerian League and he represented both Enyimba and Rivers United during his playing career. He underlines the derby status of the game in a chat with www.npfl.ng.

“For me, I think it’s a local derby if you ask me because the journey is not up to two hours. It has always been a fierce game because players make up their minds that Enyimba is a big platform so there is always something to play for,” began Ezeji who won the league with Enyimba in 2003 and Dolphins in 2004.

“From 2002, there was no time I played against Enyimba that I didn’t score against them. It is a very tough game, it has always been like that because of the rivalry, the boundary, they are not far apart so perhaps players want to do their best especially against Enyimba.”

Ezeji, born to Abia State parents but has lived most of his life in Rivers State also alluded to the PPG dimension of the battle and how the forthcoming matches could serve as some form of poetic justice for whichever side that wins.

He continued: “It is going to be a very very tough game because there is so much to play for in this particular encounter. It was the PPG/WPPG saga before the season started and Rivers United felt they were supposed to play in the Champions League and not Enyimba but somehow Enyimba played in the CAFCL and have now dropped to meet them in the Confederation Cup.

“I think it is time for Rivers United to either tell Enyimba we are better off than you or Enyimba to tell them look, we are still the Champions of Nigeria and Africa. It is going to be a very massive and explosive game because the players of both teams know what is at stake.”

One man that will be the cynosure of all eyes today is Ifeanyi Anaemena, a former vice-captain of Enyimba who left the club at the end of last season after five productive seasons with the People’s Elephant to pitch his tent with Rivers United.

Anaemena has been key for his new club in their matches both domestically and on the continent and seems fully aware of the pedigree of his former club in matches like this.

“To be honest, it is going to be an emotional game for me, knowing that I have played there in Enyimba for a very long time and it’s a club that have a good pedigree when it comes to the continent and even in the NPFL,” the no-nonsense centre back tells www.npfl.ng

“This is an opportunity for me without trying to say I will have a point to prove or whatsoever but the most important thing in this game is that we (Rivers United) actually hope to get a positive result in order to represent Nigeria in the group stage of the Confederation Cup.

“So I think playing this game, I have to give it all in order to make sure we get a positive result,” he added.

Anaemena also agrees with Ezeji that there is indeed some form of rivalry whenever the two sides meet.

“There’s always a rivalry between us whenever we play these games. While I was in Enyimba when we face Rivers United and now that I will face Enyimba as a Rivers United player, there is always this rivalry and I think it is because Abia State and Rivers State are very close and it is always tough when both sides meet.

“I think everybody wants to prove a point and the hunger to win is also there so I think it will be a very good one if we should go there and make sure that we get a good result over Enyimba. Rivers United have been in a very good shape, likewise Enyimba too. They are first on the log and Rivers United are second so it is a very important match.

“So, I think Enyimba have the pedigree in the continent but looking at the platform that Rivers United have now, I think that we can give a challenge to Enyimba and make sure that we qualify for the group stage,” submitted Anaemena who scored for Enyimba in a 2-0 win over Dolphins in 2015.

Enyimba head coach Fatai Osho in his own spectrum sees Sunday’s game as a celebration of Nigeria’s top flight. Osho has brought about a scintillating style of play for the People’s Elephant which has seen them rise to the top of the table after nine matches this season.

The Sugar Ball exponent believes the stakes are higher than a regular domestic clash between both sides and the players know this.

“It is a platform that they can use to express themselves and let people know what they can do. Nobody wants to lose that kind of opportunity and I foresee a situation where both sides will want to come out for each other but I see it as more of a celebration of the NPFL on Sunday,” said the former Remo Stars head coach.

To make this tantalizing clash the more interesting, both teams could end up facing three times in two weeks depending on when the NPFL Match Day 11 game between both sides (originally fixed for February 21) will be rescheduled. For the moment though, this Sunday a time to savour the flavour of a derby that flows with cash and passion.