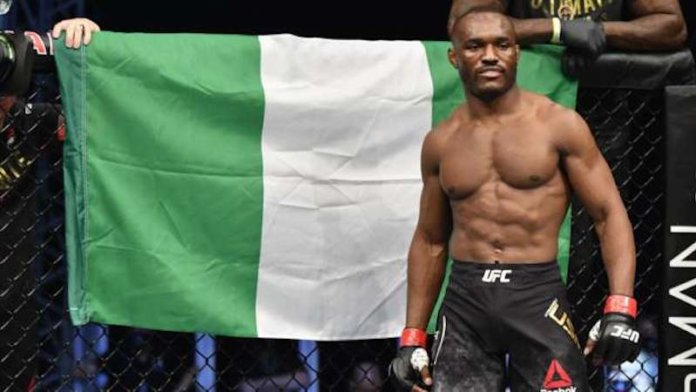 The pair were due to meet in Abu Dhabi last July but after Burns tested positive for Covid-19, the bout was rescheduled for December only for Usman to request a delay due to an unspecified injury.

Usman, 31, has held the title since March 2019 and this will be his third defence of the belt as he aims to improve his UFC record to 18 wins with just the one loss.

“I dictate what happens in a fight,” Usman told BBC Sport Africa. “Based on how prepared my opponents are, that dictates how the fight goes but rest assured that one thing is for sure – at the end of the fight, my hand will be raised.”
The Nigerian mixed martial artist knows his opponent well, the pair having been team-mates training at the same gym in Florida before Usman decided to move to Colorado.

“I will always be victorious because I am just that much better than all these guys,” said Usman. “Based on how well they did their homework, the fight could go in one of two ways – they could have a fighting chance or I can just dominate like I do most fights.”

Usman says that when they were team-mates, he helped the 34-year-old Burns, who has won 19 of his 22 fights, but this will be the latter’s first UFC title fight.

“We spent a lot of time training together,” said Usman. “I helped him out a lot. I have even flown halfway around the world to work in his corner with him, to help him be successful, so I know him very, very well.

“But over the last couple of years, we’ve kind of grown apart because I wanted something a little different. I wanted more of that specialised attention which is why I’m here in Colorado.

“He’s grown up but so have I and now he gets to test all that growth that he’s had in the last two years – and test it against the best in the division.”
Burns won his sixth fight in a row last May as he beat the American Tyron Woodley, who Usman beat in 2019 to win the title.
Born in Auchi, Nigeria, before moving to the United States with his parents aged eight.