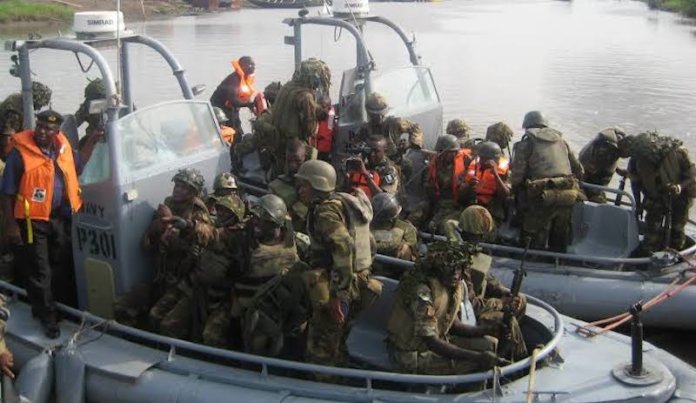 Seventeen suspected pirates and sea robbers have been arrested and 15 militants’ camps destroyed in Akwa Ibom State and some parts of Rivers States by the Nigerian Navy.

The Commander of NNS Jubilee, Commodore Abdulmajid Ibrahim, said the destruction took place within the jurisdiction of the Command.

Ibrahim, who briefed journalists yesterday at the Nigerian Navy, Jubilee Base in Ikot Abasi Local Government Area of Akwa Ibom State, said the militant camps were destroyed during its anti-piracy and anti-sea robbery operations.

He explained that the militant camps were uncovered and destroyed after the navy were able to penetrate some of the 1,800 creeks within the jurisdiction of the base.

Ibrahim said between May 2020 and January 2021, the navy destroyed the 15 militant camps, arrested 17 piracy and sea robbery suspects, and seized 285,000 litres of illegally refined diesel and recovered different kinds of ammunition from them.

He said the joint patrol operations of the navy and Nigerian police resulted in relative peace and security in the area, and brought illegal bunkering and trade on the water ways to the barest minimum.

According to him, “Within six months as commander of the base, we have destroyed 15 militant camps, arrested 17 suspects during our operations, and recovered 285,000 litres of diesel and ammunition from them, and have also handed over the suspects and items to the prosecuting agencies.

“We do the work of the police, and are involved in joint patrol everyday with them.

This has led to relative security and peace in the area, as well as brought illegal bunkering to the barest minimum.

“Our strategy is a continuous aggressive patrol. We try to dominate the water space and maritime environment. Within the last six months, there has been no attack on the NNS infrastructural base.

“We have maintained a good civil-military relationship with our host community, through our Corporate Social Responsibility (CSR). We carry out free medical consultations and give out drugs within our capacity in our medical rhapsody outreach programme.”

The commander attributed the success of their operations to intelligence information gathered from members of the public, and called for more support in that regard.

He assured Nigerians that the sources of such information would remain confidential and protected, adding that to effectively deal with piracy and sea robbery, members of the public must volunteer credible information to the navy.