Sanwo-Olu: I’m Seeking Reelection on Success of My First Term 1 hour ago

No PVC, No Voting in 2023 Elections, INEC Declares 1 hour ago 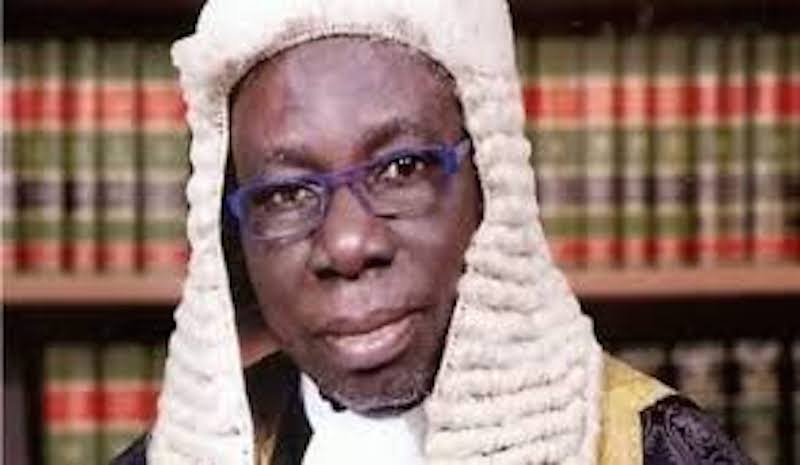 The Body of Senior Advocates of Nigeria (BOSAN) Abuja Chapter and Asiwaju Adegboyega Awomolo, SAN pay tribute to Alhaji Abdullahi Ibrahim CON, SAN, FNIALS, FCIArb (1939-2021) former Attorney-General of the Federation and Minister of Justice, Federal Republic of Nigeria (1997 – May, 1999), Life Bencher and former Chairman Emeritus of BOSAN, who died on January 24, 2021 at the age of 82. May Allah, in His infinite mercy, grant him Aljannah Firdaus

The Body of Senior Advocates (BOSAN) Abuja Chapter, mourns a quintessential community leader, seasoned and distinguished advocate, astute administrator, consummate bridge-builder, humane and thoroughbred professional; former Hon. Attorney-General of the Federation and Minister of Justice, former Minister of Education, Science and Technology, former Minister of Transport and Aviation, former Minister of Science and Technology, former Chairman Emeritus of the Body of Senior Advocates of Nigeria (BOSAN), Commander of the Order of the Niger (CON), Life Bencher, Senior Advocate of Nigeria, Fellow, Nigerian Institute of Advanced Legal Studies (FNIALS), Fellow, the Chartered Institute of Arbitrators, Member, National Committee for the Reformation of the Judiciary, etc. He served meritoriously in these and several other capacities, and made sterling contributions to the social, legal and political evolution of the country. As a recognised international personality, he was conferred with the highest honour (Gran Cruz de la Order de la Independence de Guinea Equitorial), by the Government of Equitorial Guinea.

A scion of Igala, he was born In 1939, at Okaba, Ojoku District, Ankpa Local Government Area of the present day Kogi State, to humble parents, and Alhaji Abdullahi Ibrahim rose through difficulties to reach the stars. He reached the pinnacle not only of his profession, but also established one of the foremost law firms in the country, Abdullahi Ibrahim and Co, Legal Practitioners and Chartered Arbitrators, with offices in Lagos, Abuja, and Kaduna. One unique feature of this firm is that, Alhaji had handed over the management of the practice to his lieutenants several years before his demise even though he continued to provide advice and support for the firm. The firm has resolved countless legal puzzles and produced several Judges and Justices, as well as Senior Advocates and other accomplished professionals.

A quiet philanthropist, he committed huge resources and sacrificed personal comforts to provide education and succour for countless colleagues, relations, members of his staff and others who came across his path. He made immense contributions to the social development of his community by establishing a secondary school and other social infrastructure, while also supporting worthy causes which have rescued many from the pangs of ignorance, illiteracy, and poverty. Those who knew him would readily agree that, Alhaji Abdullahi Ibrahim found fulfilment in life, not in personal achievements, but in serving the Almighty Allah, living simply, and sharing his God-given endowments with others. He made immense contributions to the improvement of Hajj Operations, with a view to improving the welfare of Muslim pilgrims. His biography, which was commissioned in 2012 and supervised by his bosom friend, nay brother, Hon. Justice M.L. Uwais, GCON, former Chief Justice of Nigeria, is aptly titled, ‘Alhaji Abdullahi Ibrahim, A life shared’.

The first Attorney-General of the Federation and Minister of Justice from Northern Nigeria, Alhaji Abdullahi Ibrahim left indelible footprints on the sands of time. His achievements include, but are not limited to transforming the Ministry into an engine of justice sector reform, and advancement of human rights. Notably, he was the one who secured for the Ministry, the plot of land on which its headquarters sits majestically today in Maitama, Abuja, next to the Federal High Court. What great foresight! More importantly however, he will be remembered as the Attorney-General who facilitated the all-important transition from military to civil rule in 1999.

A man of modest taste and superb family life, he maintained excellent relationship amongst his two wives, Hajiya Bilikisu and Hajiya Sa’adat, and their children. He also adopted several others as his children, and connected them to great opportunities in life and profession. He generously poured out his life into others, in his unrelenting bid to ensure that his numerous ‘children’ attained success in their career. Thus, several of them can be found in important positions in their different callings in the justice sector and beyond. His, was truly a life shared.

Alhaji Abdullahi Ibrahim CON, SAN is widely acknowledged and will be remembered as a perfect gentleman, a giant in the legal profession, quiet philanthropist, noble statesman of high esteem and a God-fearing Muslim, who believed that the best way to serve God is to enrich the lives of fellow human beings.

On Sunday, the 24th day of January, 2021 Alhaji Abdullahi Ibrahim OFR, CON, SAN breathed his last at the age of 82 years, and slept.

There erupted cries, noises and latter voices of glory and thanksgiving for a great man that had passed in our country, our profession and our families.

While he was here with us, he toiled, sowed seeds, harvested, gave to the poor and needy, and kept little for his family and future as inheritance.

He will forever be remembered as one of the greatest men who contributed immensely towards building bridges of love across religion, tribe and nations. He was a statesman, who used his knowledge of law to make Nigeria a respected Nation.

As a former occupier of the Office of the Honourable Attorney-General of Federation during the Military regime of General Abdulsalami Abubakar (Rtd), he laid the foundation for the modern institution that is meant to secure the principle of separation of powers.

He was one of architects of the National Judicial Institute, through the Constitution of the Federal Republic of Nigeria 1999 (as now amended). He secured the land upon which the Federal Ministry of Justice and the Federal High Court Headquarters are built today.

A Man of Principles

Alhaji Ibrahim, SAN was an exemplary legal practitioner who believed in the rule of law, and practice of law with the highest level of integrity.

He was very disciplined, both in his private and public lives. He abhorred corruption, and detested misuse of public trust in whatever form. As a member of the Body of Benchers his voice was formidable in the debates of very crucial issues of legal education, professional ethics and judicial reforms.

He was noted for excellence, in the practice of law. He reformed the approach to the functionality and impactful, Legal Practitioners’ Disciplinary Committee of the Body.

It was during his time that the practice and antics of frustrating and stalling of the Committee’s proceedings by ex parte orders of injunction freely given under the pretext of enforcement of Fundamental rights by errant legal practitioners, was stopped.

Alhaji Ibrahim was a man of character, courage, peace and love. He loved the Nigerian Bar Association (NBA), like his baby. He did all within the law to protect and preserve the existence of the Association, when the Association ran into a stormy crisis that nearly drowned it.

At the Annual Conference of the Association in 1992, there were disagreements that made the election of officers then impossible, and there was no provision in the Constitution of the Association to take care of such a vacancy in management of the Association, because it was not envisaged. There were series of court orders obtained by different interests from different jurisdictions, as to who should manage the Body of the largest number of Lawyers in the Continent of Africa (NBA).

The Body of Benchers, the highest body of the Profession constituted a Committee of eminent Lawyers under the Chairmanship of late Chief Frederick Rotimi Alade Williams QC, SAN, CON. Alhaji Ibrahim, SAN, was next to Chief Williams in the Committee. He used his vast knowledge and experience in Government and wide goodwill at the Bar to facilitate the conduct of an election of officers for the Body in 1998, working and monitoring closely the Committee of Chairmen and Secretaries of the 44 Branches of the NBA then. As Chairman of the Chairman and Secretaries of the 44 branches, I attest to the fact that he was a generous to us in good will, financial and moral support.

Very recently again when the NBA had a very serious crisis following a dispute election of officers, Alhaji Ibrahim as Chairman of the Board of Trustees of the NBA, with Dame Priscilla Kuye, and Chief Wole Olanipekun, SAN as Trustees, hosted several meetings in his chambers in Asokoro where all the disputes were resolved amicably.

Alhaji Ibrahim was the Chairman, Board of Trustees of the Body of Senior Advocates of Nigeria (BOSAN). He was also the Leader of the Body in Abuja.

He was neither a religious bigot, nor tribalistic in his dealings with people. In his Law Firm today, Christians and many tribes other than Igalla, his native tribe in Kogi State, operate and function freely and effectively as a family.

He encouraged industry, recognised and rewarded excellence and loyalty. He deliberately encouraged and promoted the advancement in learning and elevation of many practitioners to attain the highest rank in the Legal Profession, irrespective of gender. He was a trustworthy and reliable leader. His Chambers is reputed to have produced, the highest number of female Senior Advocates of Nigeria.

Alhaji Ibrahim, SAN will be remembered for the seeds of love he sowed, food for the weak and lonely. The schools he built, water he provided. He made available for the poor in Okabba his village, the weak he lifted and the numerous lives he touched with his hard earned substances. He will forever not be forgotten. He was generous and kind. He will forever live in our hearts, for the truth he told and stood for. May Allah forgive his sins, and grant him Aljannah Fidaus. May his friend of over 50 years Honourable Justice Mohammed Lawal Uwais GCON (former Chief Justice of Nigeria) and members of his family, be truly comforted.