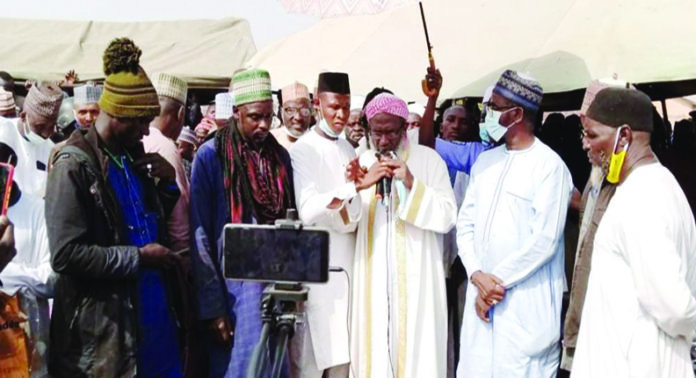 Leaders in the north must jettison the wrist-slap approach if they genuinely intend to arrest the growing insecurity in their domain, writes Shola Oyeyipo

If truth must be told, the perplexing insecurity situation in the northern part of Nigeria will remain a nagging problem for a very long time without a change of attitude and sincere commitment to routing the elements behind terrorism and banditry on the parts of security agencies, national leadership and leaders in the region.

This is because unlike during the era of militancy in the Niger Delta region, when the identities of those militants were public knowledge and not concealed, northerners seem to have taken possession of the insecurity by trying to handle the perpetrators as some of their own and by so doing, the region has become a net-distributor of bandits to other parts of Nigeria and in fact, Africa.

Such scenarios are often seen in western zombie movies, where some peoples’ loved ones caught the flesh eater virus, and rather than do away with them, they attempt to show them love and they end up being eaten by the menacing ‘zombie’.
Likewise, as long as northern leaders are not ready to give up those behind the daily killings, they will continue to live with the horror and, the kind of tension presently in Southern Nigeria would persist and might escalate into more dangerous dimensions.

This assertion is hinged on some recent occurrences in the Nigerian body politics. First, a former president, Olusegun Obasanjo, recently insinuated that President Muhammadu Buhari seemed to be ‘sleeping,’ that he was not doing enough to curb banditry in the north, including his home state and that the president did not seem to be his usual self anymore.

Obasanjo, who spoke in an interview with academic and historian, Toyin Falola, said President Buhari should wake up from his slumber and fight the banditry ravaging his backyard and that it was time for him to start thinking of leaving an enduring legacy as president.

“I thought I knew President Buhari, because he worked with me. But I used to ask people that is it that I have not read him well or read him adequately or is it that he has changed from the Buhari that I used to know? I am not subscribing to the people who say we have a new Buhari from Sudan and all that nonsense,” Obasanjo stated.

The move had signaled hope that there were some new sheriffs in town, who might be doing things differently. Yet, a counter move event by a renowned Islamic cleric, Sheikh Ahmad Gumi, who met with the bandits, showed an unbelievable level of unseriousness on the part of the north in ending insecurity in the region.

During Irabor’s visit to Borno, the Theatre Commander, Operation Lafiya Dole, Maj. Gen. Farouq Yahaya, who received him updated him on their efforts to end insurgency, also, the Borno State Governor, Prof. Babagana Zulum, implored the military top brats to work with their counterparts in Cameroon, Niger and Chad so as to fish out the Boko Haram terrorist.

He, however, made one very vital point that they needed better ties between the military and civilian so that they could get credible intelligence, which he reckoned was important to the success in the fight against insurgency.
While Sheik Gumi’s media aide, Salisu Hassan told newsmen that his boss’ ‘diplomacy shuttle’ to the bandits’ hideout in Shinkafi local government, Zamfara State, where he was said to have met with about 500 of them was aimed at stopping their criminal acts. But it put to question, everything that the Nigerian security agencies are purportedly doing to rid the country of criminality.

Some major facts that emerged from the recent events are that Nigerians want President Buhari to do more than he is currently doing to end insecurity in the country. The military and other sister agencies are playing to the gallery that they are doing everything needed to end insurgency.

Yet, some northern leaders really know these bandits, they know their names, where they live and are pampering them and begging them to stop! Such absurdity is beyond comprehension!
Noble as the intention of the renowned preacher, which was to spread the message of Islam and peace to the Fulani herdsmen and rid the country of kidnappings and banditry, might be, it showed an unacceptable level of complacency on the part of the Nigerian security forces, conspiracy on the part of leaders in the north and lack of readiness to genuinely address the problem on the part of President Muhammadu Buhari.

This is because the killers are known to them and yet, the trigger-happy military that would rather shoot at peaceful protesters, would look away while bandits were having meetings and taking pictures.

Not only that, Makkai and Tubali forests in Shinkafi LGA were freely named as territories under the control of armed Fulani herdsmen, the names of the bandits top commander were given as Kachalla Turji and Kachalla Muhammadu Bello.
They made various assertions such as they are not afraid of death, that the Nigerian and Zamfara State governments reneged on promises made to them; that they were being underestimated and that was how Boko Haram came about.

Bello was quoted to have said: “Let the killings of our loved ones by security agents without due process of the law stop, as well as cattle rustling that denied most of us legitimate means of livelihood.”
The shocks expressed by three twitter users, when the news of the clergy’s visit to the bandit broke aptly captured how a lot of other Nigerians will be looking at the development.

Sunkanmi, for instance, asked why the security outfits in Nigeria will be acting as if they don’t know where the bandits are hiding, saying “Sheik Gumi has met with the bandits twice in 3 weeks. Our dear @HQNigerianArmy, @NigAirForce, @PoliceNG, DSS and presidency, do not know the whereabouts of the bandits to take them out but Sunday Igboho is their major problem.”

Premier of Nigeria said: “Sheik A. Gumi met with bandits, if a southern pastor meets with bandit, will the presidency and northern Muslims still be saying the same thing? It is our duty to report all crimes to security agency. Why will Sheik Gumi not report but visit the hideout? Still waiting for DSS action.”

Obiora lamented that, “They bullshit the laws and make a mess of the security agency,” asking “What else?”
There is no gainsaying that Boko Haram has turned the North East to a war zone while, states like Sokoto, Zamfara, Kaduna and Kastina are now homes to bandits, marauders, kidnappers, rapists and arrays of hoodlums. Experts have traced the situation to corruption and the refusal of northern political elites to educate the young generation, which makes them readily available as participants in the fast-growing banditry industry of the north.

The choice of whether or not peace and normalcy return to the north lies with leaders and people in the region. There must be concerted effort towards ridding the affected areas of the perpetrators. But as long as the people attempt to shield and cover them up, the killers will continue to have field days.