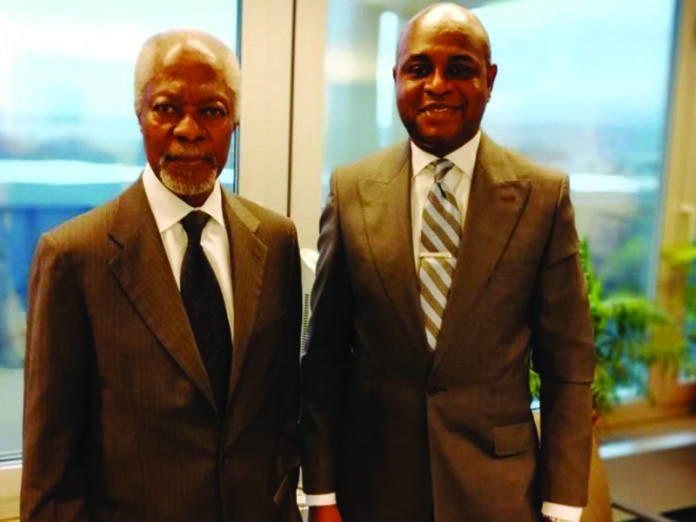 Searching for something on my mobile phone, I came across this photograph. It sent me into memory lane.
With a sense of loss I remember my mentor, friend and boss of all time, the great Kofi Annan, Nobel Laureate, former Secretary-General of the United Nations. Here we were after a very warm one-hour meeting at his office at the Kofi Annan Foundation in Geneva in January 2018, a few weeks before I announced my candidacy in Nigeria’s 2019 presidential election. He strongly encouraged me to run for president, saying Africa needed a new generation of leaders.

We joked about how ageless he was, as I reminded him he hadn’t changed one bit from ours days. ….In the mid-1990s when he was my direct boss as Under-Secretary-General for Peacekeeping Operations and I was the Political Affairs Officer in the Africa Division handling conflict resolution and the rebuilding of failed states in then war-torn Rwanda, Angola and Somalia.

Kofi mentored me and had a soft spot for me as a rising young African UN officer in those days. He and I also happened to be residential neighbors on Roosevelt Island in New York. We often rode the tram together from the island over the river to 59th Street, and would hit the pavement on foot to our office at UN Headquarters (he hated driving and much preferred to walk – this was before he was elected Secretary-General and protocol required he had to be chauffeured!) We his staff all called him by his first name Kofi as he preferred but, again, when he became the Secretary-General, protocol forced us to adapt to “Mr. Secretary- General”.

When rumors began to swirl that he was a strong possibility to replace the Egyptian Boutros-Boutros Ghali as SG, he seemed an unlikely candidate to the less informed. He was not a typical African politician or a Minister of Foreign Affairs as was the typical profile (in other words he did not have the diplomatic equivalent of “grassroots structure” but was more of a technocrat. ) But I knew he was certain to win, for several reasons, not least of which was that times were changing. UN reform, in which Annan as SG was later to offer me a significant role with an appointment as a member of the High Level Redesign Panel on the UN Internal Justice System in 2006, was the talk of the day. There was a yearning in some global powerful quarters for more of technocratic successor to reform the organization and solve practical problems than a strong politician like Boutros – Boutros Ghali.

The imperial “ BBG” as the reigning Secretary-General was referred to, and who wanted a second term Washington increasingly seemed determined to veto, was quick to deliver a preemptive strike that was clearly intended to weaken Annan’s chances. Boutros-Ghali attempted to “exile” Kofi with an appointment as the Special Representative of the Secretary-General to the Former Yugoslavia.

As often happens in life, what was intended for other reasons became a huge opportunity. First, the western powers prevailed on BBG to limit Annan’s absence on this assignment to four months to ensure he returned to UNHQ in New York soon. But the assignment actually gave Annan massive hands-on international diplomatic exposure in a theatre of war in the Balkans, reputed to be “the graveyard of diplomats”. He excelled. Operating in the close sight of the European nations and impressing them with his skills, Annan’s potential candidacy became a Fait accompli.

Immediately Annan arrived in Zagreb, Croatia, he sent a message that he wanted yours truly to be sent down from New York to Zagreb as his Special Assistant. I was thrilled and honored! But there was just one problem: my wife was pregnant with our first child and was very close to delivery. We did not have any help at home as such hired help was too expensive.

Forced to choose between this request and my wife, I chose my responsibility to my wife. I sent Annan a note thanking him for his kind invitation and what a privilege it was for me. But I was in a bind with my personal situation. He replied that he wasn’t aware of my wife’s pregnancy and if he had been, he would not have asked. I should stay and tend to my wife at a time like this, he said.

Years later when, after my assignment in Geneva at The Global Fund and later resigning from the UN to start my own risk management consulting firm in the same city, I was appointed Deputy Governor of the Central Bank of Nigeria, my cell phone rang one day at work. “Dr. Moghalu? The female European voice inquired. “Yes” I replied. “Please hold on for Mr. Kofi Annan from Geneva” she said (he had by now completed two terms as UN head and retired to Geneva, where he established the headquarters of the Kofi Annan Foundation.) “Congratulations, Kingsley”, he told me, and offered some advice as I could feel his typical smile and twinkling eyes even over the phone.

Naturally, I wasn’t going to do something as “heavy” as running to be elected President of Nigeria without consulting my boss, mentor and friend. On this day as we talked intimately in Geneva, he was as fit as a fiddle. A few months later, he was gone, aged 80.
Nostalgia overwhelms as I write. Adieu, Kofi Annan. A great world leader, a great African, a great son of Ghana. My boss of all bosses. I learnt much from you.

––Kingsley Moghalu is a former Deputy Governor of Nigeria and is the United Nations Development Program’s Independent High Level Expert on Post-Covid Development Finance for Africa. 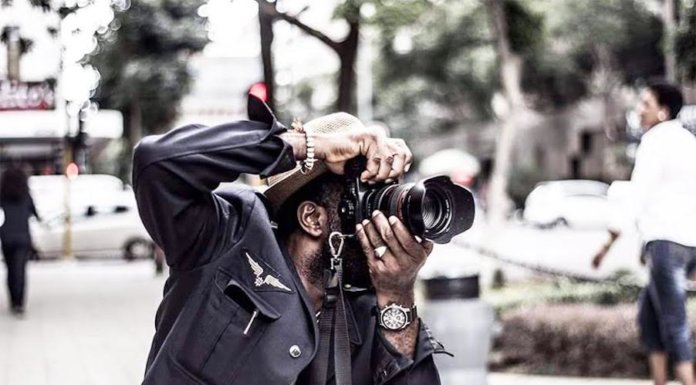