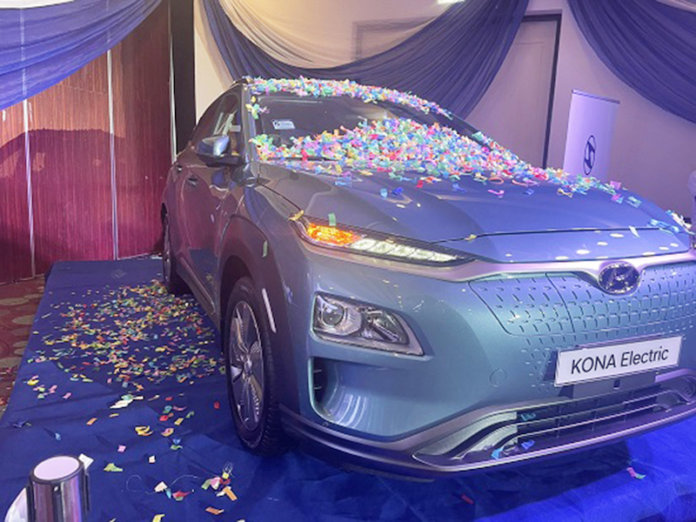 Stallions Motors has launched Nigeria’s first electric car in Abuja at an elaborate ceremony held yesterday at the Sheraton Hotel.

The electric car has five years of battery and manufacturer’s warranty, 100 per cent electric, zero-emission and 482 kilometres range for nine hours charging duration.

The car was launched in the nation’s capital, three months after it was first unveiled in Lagos.

Badjatya said the car, which is assembled in Nigeria has low noise and low maintenance, insisting that electric car is the way to go and has come to stay in Nigeria, adding that the country cannot afford to be left behind.

After test-driving the electric car, Otunba Adebayo, described its performance as exceptional. He said concern about the availability of the vehicle’s charging points would be addressed over time because business people would see the opportunity to create a business by setting up charging points.

“Slowly and gradually, like in other parts of the world, there is an increased awareness of what people can buy into. When people start purchasing these vehicles it will give an opportunity for other people to create business for themselves by setting up charging point business,” Adebayo said.

He also said the production of the electric car would result in competition, adding that the federal government is already in talks with Stallions Motors to reduce the price of the cars to make it affordable for many Nigerians.

On his part, Aliyu said that NADDC has been working very closely with Stallion and other stakeholders to ensure that they assemble and produce vehicles specifically configured for Nigerian buyers.

He expressed excitement that many investors are finding the country worthy to invest and provide further services good for Nigerians.

“This is the very first one. There is another company-hallmark vehicle,- an offshoot of another indigenous company in Nigeria that is making electric minibuses. This is just the beginning and we believe it will add value to the Nigerian economy,” Aliyu said.

He appealed that electrical challenges in the country should not deter motor manufacturing, saying that though there are always challenges, they should not be allowed to slow the economy. He said the challenges will allow for creativity to provide power for electric vehicles.

While talking on affordability, Badjatya said Stallion Motors is working with the authority to ensure that the electric car is affordable to more Nigerians. The CEO also stressed the need to embrace the future.

“This is the future; there is no doubt about that. We can’t wish it away that we don’t have power because the entire auto world is embracing review. Slowly we are getting away from the tank and petrol engine, and we don’t want to be left out. I do believe that an electric vehicle is the future,” Badjatya said.