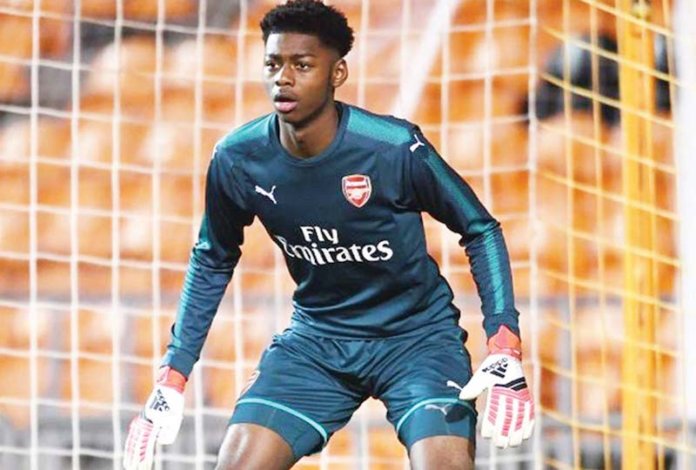 With first choice goalkeeper, Bernd Leno out of Arsenal next three matches as a result of a straight red card issued to him in Arsenal 2-1 loss to Wolves midweek, and second choice Mathew Ryan battling with hip problems, Arsenal youngster, Arthur Okonkwo may have a part to play in Gunners visit to Villa Park this afternoon.

Okonkwo has been involved in Arsenal’s first team training session at London Colney before their trip to Birmingham, where they face Aston Villa in the Premier League today.

Manager Mikel Arteta ran the rule over the England youth international of Nigerian descent with a view to his inclusion in the matchday squad.

The Spanish tactician is currently facing a goalkeeper crisis as first choice glovesman Leno is not eligible to be fielded after he was shown a straight red card for handling the ball outside his area in the 72nd minute against Wolves.

Brighton & Hove loanee Mathew Ryan is struggling to overcome a hip complaint and will have to prove his fitness in training before he comes back into contention for a roster spot.

It is looking likely that Okonkwo will be involved in some capacity against Aston Villa if he is not selected for the Premier League 2 fixture against Chelsea this evening.

The 19-year-old arrived with the first team for recent matches against Newcastle United, Manchester United and Wolverhampton Wanderers.

He has kept an impressive four clean sheets in seven appearances for Arsenal’s U23 team since his debut for the age group.