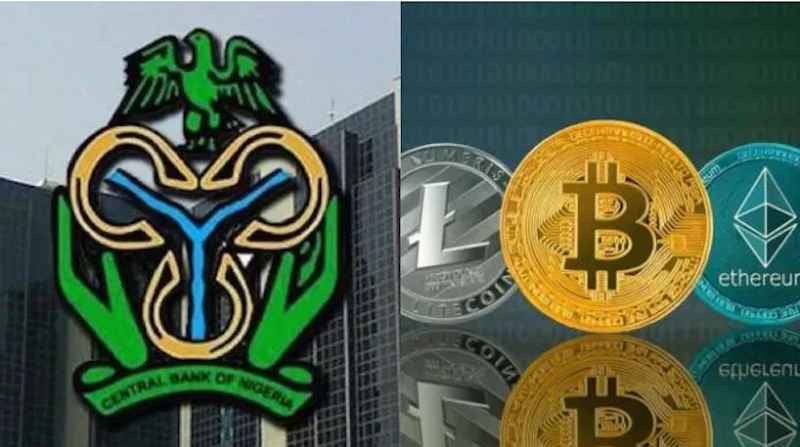 The Central Bank of Nigeria yesterday directed banks and other financial institutions to immediately close any accounts dealing in cryptocurrency or facilitating payment for crypto currency exchange, with immediate effect.

A cryptocurrency (or crypto) is a digital unregulated currency that can be used to buy goods and services, but uses an online ledger with strong cryptography to secure online transactions. Much of the interest in the currency, not backed by any government, is to trade for profit, with speculators at times driving prices skyward.

The banking regulatory authorities directed banks to expose any individual and entity running such accounts, warning that failure to adhere to the directives would attract strict sanctions.

The apex bank, in its circular on the issue cautioned deposit money banks, (DMBs) non-bank financial institutions (NBFIs) and other financial institutions (OFIs) and members of the public on the risk associated with transactions in cryptocurrency.
The circular was signed by the Director of Banking Supervision, Bello Hassan and the Director of Payments System Management Department, Musa Jimoh.

Rewane: Prohibition of Cryptocurrency Not Ideal

But a leading financial analyst and Managing Director, Financial Derivatives Limited, Mr. Bismarck Rewane expressed reservations at the prohibition of cryptocurrency by the apex bank.
He said rather than outright prohibition, the CBN should have concentrated on regulation of the means of exchange which it started in 2017.

According to him, “In 2017, the CBN raised the alarm and warned that anybody that engaged in cryptocurrency and got his hands burnt would be on his own. The best thing is to regulate it, put it under a rule that will stipulate the number of people that can participate. A lot of people do not understand it, they will just lose money. So, there are two elements, one is to regulate the market, to protect the investors through capital requirement and the other is to prohibit it’.

“Cryptocurrency is being used as a store of value and also to use it as a medium of exchange and for trade, so it’s parts of the characteristics of money.
It needs to be studied carefully and controlled not prohibited.
“What CBN should do is to regulate the players and the number of people who can access the service because many people don’t understand the system and they may become vulnerable. This regulation can be in form of stipulated capital requirement or minimum threshold which will discourage some people with bad intention,” he suggested.

In his response, Chairman, Cowry Asset Management Limited, Mr. Johnson Chukwu said there is need for the CBN to let the public know if it has privileged information about the dangers of the digital means of exchange.

He recalled that the Nigerian Communications Commission (NCC) had rolled out regulations of digital money in 2020, wondering why the apex bank decided to prohibit the use of such means of transaction.

He said, “The CBN, in its circular did not specify their motivation. They talked about Financial System Stability which was done about three years ago where they warned that cryptocurrency is injurious and could be used for financing of fraud and terrorist activities.

However, beyond that, CBN could have genuine concerns that there is a large pool of currencies outside the banking industry and outside its purview and therefore could be an avenue for the financing of terrorising and drugs activities.
“If the CBN has proofs that it’s being used for nefarious activities then it should make it known to the public,” Chukwu said.

The Federal Government had few years ago expressed reservations about the growing popularity of cryptocurrency, warning that criminal elements may use it as a means of perpetrating fraudulent acts in the country.

Speaking at a seminar with the theme, “Understanding the Interface Between Crypto-Currency and Money Laundering in Abuja, in 2018, the Governor of Central Bank, Mr. Godwin Emefiele said as the global use of cryptocurrency with the associated inherent risks continue to gather momentum, the need for legislative frameworks to address the challenges became imperative.

He challenged financial institutions to prepare and protect themselves against both direct and indirect vulnerabilities, pointing out that there is need to understand the Money Laundering/Terrorist Financing risks as well as the inherent risks associated with virtual currency and attack vectors.

According to Emefiele, “It is evident that criminals have already adapted their attacks to include vulnerable platforms wherever and when the opportunity manifests itself. Risks associated with the use of virtual currency and exchange would need to be nipped in the bud if the safety and soundness of the financial system are to be sustained.”

Lending his voice to the warning against the adoption of cryptocurrency, Chairman, Presidential Committee Against Corruption, Prof. Itsay Sagay, who was also at the seminar said while cryptocurrency yields benefits to those providing the service or trading with it.

He added: “It was like a ‘stateless phenomenon’ that poses challenges. There is a dark side, which includes the use of cryptocurrency for criminal activities.”
The almost invisible and decentralised nature of virtual currencies, he emphasised, creates a potential for them to be used for money laundering and terrorist financing.