A Judge and His DNA Story 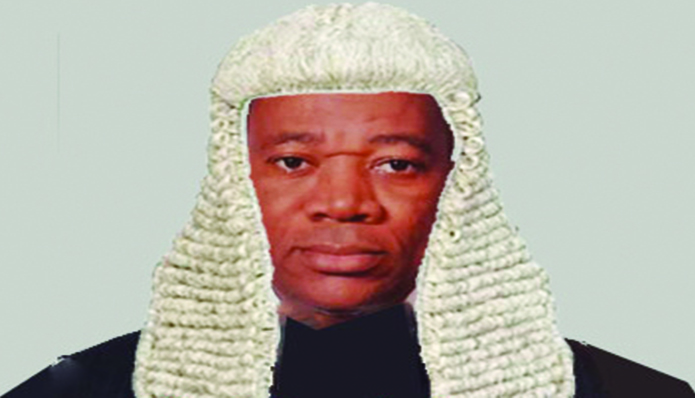 Justice Anthony Ezonfade Okorodas of Delta State High Court narrates how the use of DNA helped him discover that three of his supposed children are not biologically his, writes Charles Ajunwa

It is estimated that 30 per cent of men in Nigeria are not the biological fathers of their children. Today, many marriages are facing challenges no thanks to infidelity. The use of words like “divorce” and “separation” are now common in our society. In Nigeria, the paternity of any child in contestation is determined by acknowledgement, by presumption and by proof. In all the circumstances, the solution is to prove paternity through a document or DNA tests.

The Child’s Right Act 2003 statutorily introduced the use of scientific tests to determine the paternity of a person in Nigeria. By Section 63 thereof, the court may, on application, give a direction for the use of scientific tests, including blood tests and Deoxyribonucleic Acid (DNA) to show that a person is or not the father of that person. Where a father alleges that a child is his, an order of scientific DNA test may be made on the child. Also, where a child alleges that a particular father is his, the court may make an order for the alleged father to undergo DNA test to prove or disprove the allegation. The court makes such an order for scientific tests in both circumstances because doing that is in the best interest of the child.

Apart from paternity cases, the use of DNA has been successful in identification matters. After DNA testing entered the U.S. legal system in 1987, Tommy Lee Andrews of Florida was convicted of rape after tests matched a sample of his blood with semen left at the crime scene. DNA also was used to clear someone of a crime. Glen Woodall of West Virginia was in prison for rape, kidnapping, and robbery for years but a DNA testing later proved his innocence. He was released in 1991 after serving four years in prison.

In 1992, the US Army began collecting DNA samples from recruits to make it easier to identify soldiers killed in action, especially when there are few remains. In 1998, DNA extracted from the remains of a bone was used to identify the unknown service member of the Vietnam War buried at Arlington National Cemetery. The remains were identified as Air Force 1st Lt. Michael Blassie.

One of the celebrated cases was the famous paternity tests in 1998 that involved US former president, Thomas Jefferson and a slave named Sally Hemings. Based on DNA from descendants of both of them, scientists concluded that Jafferson fathered all six of Hemings’ children. Jefferson was an American statesman, diplomat, lawyer, architect, philosopher, and founding father who served as the third president of the United States from 1801 to 1809.

Decades after Hemings’ claim that Jefferson fathered her six children was put to rest through the use of DNA tests, a Delta State High Court judge, Anthony Ezonfade Okorodas, on Thursday, January 28, 2021, publicly announced that the three supposed children he had with his estranged wife are not his.

Okorodas, who accused his former wife Celia Juliet Ototo of cheating during their marriage which ended 11 years ago, said he was persuaded to carry out the DNA tests after he received an anonymous call during the COVID-19 lockdown in April 2020 that one of the children wasn’t his. According to Okorodas, after the DNA test proved that he was not the father of his last child, he decided to conduct DNA tests on the two remaining children from his former wife and the results showed they are equally not his.

Given the circumstances, Okorodas and his second wife, Ebi, agreed to carry out DNA tests on their four children and the results showed they are biologically his, to the relief of a devastated father.

Despite this discovery, Okorodas insisted that he and his current wife have continued to care for the education of the three children from his estranged wife: “I have taken the decision to address the press in respect of certain traumatic developments that have arisen between me and my ex-wife, Barrister Celia Juliet Ototo of the Ototo Family of Ovom in Yenagoa Local Government Area of Bayelsa State. It is now nearly 11 years since our separation and divorce. This press statement is important in order to prevent damaging speculations, half-truths and outright lies from persons who may want to cash in on the tragedy that has befallen my home.

“Sometime during the Coronavirus lockdowns early last year, I received information from an anonymous source that indicated that the last of the three children from the previous marriage was in fact not my biological child. Due to the COVID-19 restrictions at the time, I had to wait until August 2020 to carry out a DNA test. The DNA result which came out in September 2020 confirmed that I was not the biological father of the child.

“Consequently, I convened a joint meeting between my family on the one side, and Celia’s paternal and maternal families (i.e., the Ototo Family of Ovom Town and the Agbagidi Family of Yenagoa Town) on the other side, where I confronted her with the paternity fraud allegation.”

He continued, “Although she initially strongly insisted that I was the biological father, she has since confessed to having the child with another man during the course of our marriage. This repulsive act of my ex-wife prompted me to conduct DNA tests in respect of the two other children. A few days ago, the results came out. Sadly, none of them is my biological child.

“This abomination has caused excruciating mental trauma to me, my present wife, Barrister (Mrs.) Ebi Okorodas and all of the innocent children involved. This is particularly so for Ebi, who has had to agree to have DNA tests on the four children of our own marriage. Thankfully, the test results confirm each of them to be my biological child.

“It is important to state that Celia walked away from the marriage when her youngest child (who is now 17 years of age) was just 6 years old. Since then, all of her children have lived with my wife, Ebi and I, and we have been wholly responsible for their well-being and education. Friends who are close to my family would readily attest to the fact that unless specifically informed, no one could tell that children were not the biological children of my present wife.

“Ebi and I would continue to support the children in any way that we can. Indeed, even after the release of the first DNA test result which proved that I was not the biological father of the last child, we have continued to pay for his education in a private boarding school. The two other children are university undergraduates. The first, female, will be a graduate later this year, and the second will soon enter his 4th year of study. We pray for them to overcome the trauma and become responsible citizens of the country. For Celia and her boyfriend or boyfriends, we leave them to their conscience.”
Barrister Celia Ototo has not spoken on this mess that has kept the social media abuzz in the last 10 days.

Quote
Ebi and I would continue to support the children in any way that we can. Indeed, even after the release of the first DNA test result which proved that I was not the biological father of the last child, we have continued to pay for his education in a private boarding school.