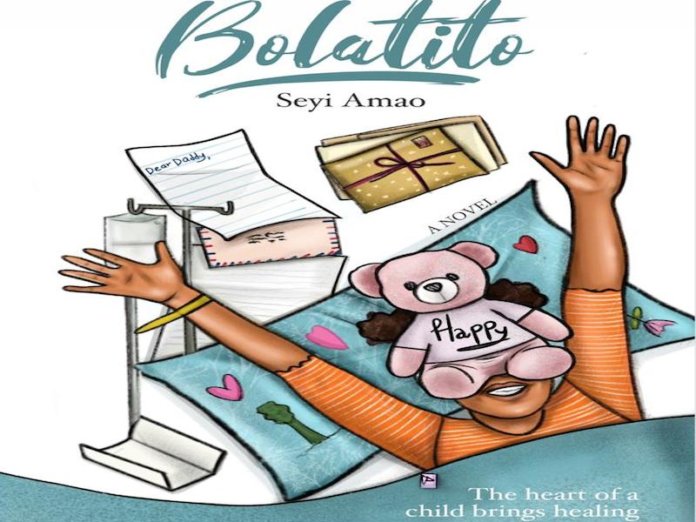 Seyi Amao takes the reader through the storms in the lives of her characters to unravel a sweet love story for a riveting denouement, writes Yinka Olatunbosun

In a conversational style, Seyi Amao, the author of the fictional novel titled, “Bolatito” carefully beams light on the dark side of life where trauma, betrayal, disappointment, prejudice, depression and sickness lie. Bolatito is quite an atypical ‘happy ending’ story with the overarching theme of love.

The plot was built along a friendship cultivated within the hospital walls between a 12-year old girl battling with an auto-immune disease and a woman-a victim of domestic violence, to say the least. Despite the age difference, both shared courage and the spirit of survivor in the face of formidable life challenges.

Bolatito, the character on which the book is titled, is at the verge of divorce. She captures the image of a woman who is torn between living according to societal expectations of being a biological mother and living a life that brings peace.

Of course she desires to have a child but not at the cost of her life. Her loveless marriage breeds such toxicity that makes the dream of raising a child an impossible mission. On the other side, Ifunanya, who had lost her mother craves the love of her father, Azuka, a frontline military man at the centre of the war against terror in Northern Nigeria.

The death of Azuka opens a new chapter for ‘Bolatito’ and her quest to find love and adopt a child. Call it a Christian fiction, the novel is a repository of biblical allusions. Tito is likened to the woman with the issue of blood while Ifunanya was illustrated as Jarius’ daughter.

Through the relationship between Tito and Ifunanya, the role of support group in coping with trauma and anxieties is revealed. Many women endure the pains of betrayal from their spouses and are bruised by the judgment of the society when they venture to leave their matrimonial homes.

For the 12-year old Ifunanya, she has to endure a certain life of loneliness since most of her peers are in school or enjoying vacation with their family members. She has to develop a strength of character in her will to survive.

Largely influenced by biblical examples, the author has suffered a similar experience with infertility. She writes in the end note: “At some point in my life, I bled every day for six months. I was diagnosed with PCOS (Polycystic Ovary Syndrome) in my late twenties but doctors still struggled to identify the cause of the excessive bleeding.

“The condition started in April 2015 and I did not get proper diagnosis (endometrial polyps) for it until August 2018 which eventually led to two surgical procedures within eight months.” To deal with the trauma of her medical condition, she formed a support group called the PCOS Conquerors Platform in August 2019.

“With this novel, the author hopes to change the public perception of adoption. It is bewildering to know that many people still loathe the idea of parenting through adoption. Some parents who were fortunate to have biological children tend to discriminate against parents with adopted children, making insensitive comments about their choices.

“The attitudinal change to separation and divorce is one of the subject matters in the novel. Titi has suffered too much battery and emotional abuse to remain married to her husband. It is one of the violent encounters that eventually lands her at the hospital.

“Set in Lagos and Borno, the story also pays a tribute to healthcare workers who genuinely care for the patients through the character of Nurse Mariam. Even in the depth of pain, patients always remember the sincere nurses who cared for themwith love. No wonder the saying goes “Nursing is a work of heart.’’

A captivating read, the story of Bolatito offers a contemporary African view of parenting and love with a subtle reference to the scripture.