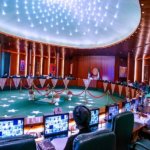 The Service Chiefs who were appointed few days ago by President Muhammadu Buhari were led on the visit by the Chief of Defence Staff, Major General Lucky Irabor.

They torched down at the headquarters of Air Task Force of Operation Lafiya Dole in Maiduguri on Sunday afternoon at about 1330 hours.

The Service Chiefs, who are expected to depart Maiduguri to Abuja Sunday evening, while in the troubled town will brainstorm with the military hierarchy in Borno State.

They will also pay courtesy call on the Borno State Governor, Prof. Babagana Zulum and the Shehu of Borno, Alhaji Garbai El-Kanemi.