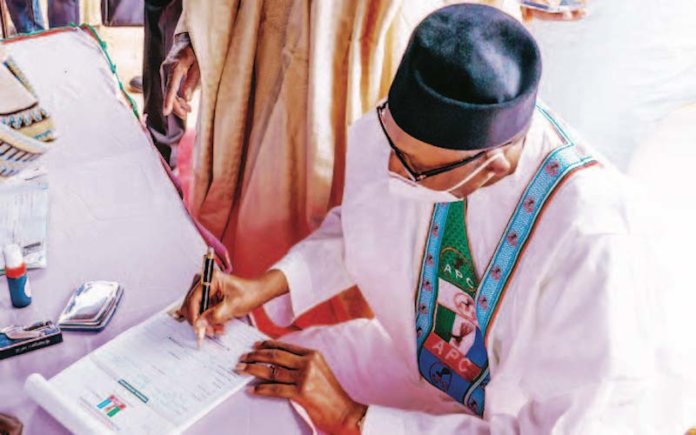 •Says critics are not interested in competence, flags off APC membership revalidation exercise

President Muhammadu Buhari has asked the Nigerian elite to stop harassing his government with their unfounded criticisms, noting that their ratings have never been competence-based.

Buhari spoke yesterday in his hometown, Daura, Katsina State, while hosting the APC governors after revalidating his party membership.

The president, who accused the Nigerian elite of constantly harassing his government since assuming office five and a half years ago, however, said his administration’s books would always be open for public scrutiny, as the government has nothing to hide.

He regretted that despite glaring successes recorded by his administration in the face of dwindling revenues, the Nigerian elite still saw nothing good in the government.
“Nigerian elites are not interested in rating the competence, but they are interested in harassing us, despite all the efforts we are making,” he said.

He pleaded with the elite to be fair in their assessment of his performance by taking cognizance of the state of the country’s finances, when he was inaugurated in May 2015.
According to the president, “The problem is that I will like, especially, the elites to, please, be reflective. When we came, where we were, the resources available from then and the condition of the infrastructure.

“So, for these years, daily Nigeria would earn having 2.4 million times 100 dollars everyday. But look at the condition of infrastructure; you know this better than I do. I know I went to every local government of the country in my three consecutive attempts to become the president.”

The president elaborated on the conditions he met on the ground in 2015.
“You know the road more than I do,” he said, adding, “You know the condition of the rail. The railway was dead. Now look at it everywhere we go, what did they do with all these monies?
“When we took over in this administration, production went down to about half a million barrels per day, the price collapsed. We had to do what is called a bailout, wherever we got the money from. Upon all the money from 1999 to 2014, we have to give you money from the centre to pay salaries.”

The president urged the APC governors to go to their constituencies and make effort to convince the elites to give his administration the respect it deserves, insisting that the government is working hard with limited resources.
According to a release by Senior Special Assistant to the President on Media and Publicity, Garba Shehu, Buhari also assured Nigerians of full and transparent implementation of the 2021 budget.

He appreciated the National Assembly for meticulous consideration of the budget before its passage.
The president said the budget captured some of the visions of the administration, and all efforts would be made to ensure its effective implementation.

He stated: “We have directed all the Ministries, Departments and Agencies (MDAs) to follow what is in the budget so that we can get the National Assembly to easily support the next budget. We can tell them what we have received, and how it was spent.
“We are always ready to make the balance sheet available for all Nigerians and the National Assembly. We have nothing to hide.”

Buhari said his administration had given more attention to agriculture in order to diversify and strengthen the economy. He thanked Morocco for supporting Nigeria’s move to produce fertilisers in the country.
He said, “We are still grateful to Morocco for the support they gave us in producing fertiliser in the country. We have 42 companies producing fertiliser in six geopolitical zones.”

In another breath, Buhari has told APC members across the country to go out en masse to revalidate their membership and put down strong roots among the people, warning that there would be “no more crowning from Abuja downward”.
Elaborating on the essence of the APC registration and revalidation exercise, Buhari charged the Caretaker Committee members to ensure the return of the party to the people by applying the bottom-up approach to politics.

“Without any incentive, they must come out and defend the party at any level so that we – you and the party – will feel secure and comfortable, because the old time of putting hands in the pocket is over, because the money is no longer available.”

The president said the appointment of the Yobe State Governor, Mai Mala-Buni, as Chairman of the APC National Caretaker Committee was in order, because the governor had served as the party’s secretary for a long time and was quite knowledgeable about the challenges facing APC.

Responding to the president, Buni thanked the governors and other party stalwarts for attending the meeting. He told the president that the party was proud of his achievements, and reiterated the mandate given to the caretaker committee by the APC National Executive Committee to re-energise the party bottom-up.
The caretaker chairman said his committee had embarked on the reconciliation of APC aggrieved members across the country before the revalidation exercise.