Osimhen, Five Others Return to Napoli Training  7 mins ago

As Buhari Accedes to N’ Assembly’s Request on Service Chiefs 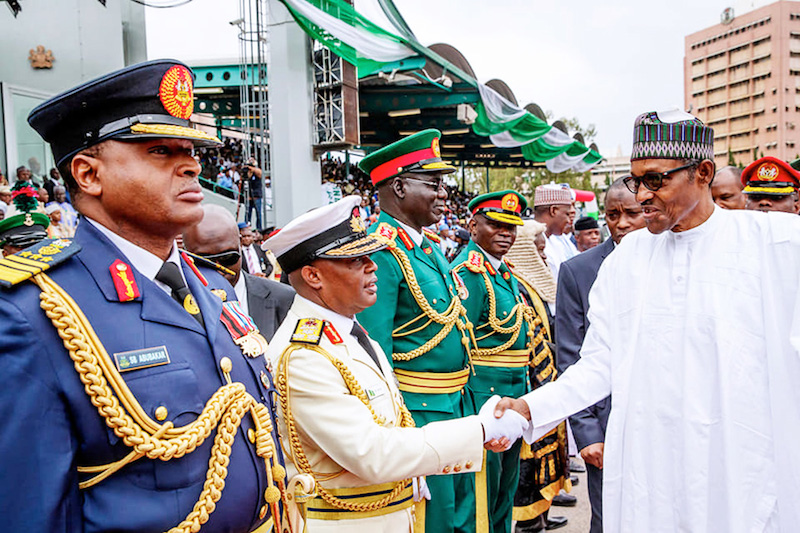 After Several Past Appeals By the National Assembly For The Removal Of Service Chiefs, President Muhammadu Buhari Last Tuesday Replaced The Service chiefs in a bid to reinvigorate the fight against insecurity in the country, reports Adedayo Akinwale

Though belated, but necessary, President Muhammadu Buhari last week made a sudden change to the security apparatus in the country by changing the nation’s Service Chiefs in response to the persistent demands and to injected fresh vigour into efforts by his administration to combat insurgency, banditry and other forms of criminality.

The much needed change came after the National Assembly had passed countless resolutions and at various times called for the sack of service chiefs insisting they have passed their best.

But most of the resolutions passed by the National Assembly had fallen unto the deaf ears of the President who believed that the outgone service chiefs still have more to offer, hence his belief in them.

However, the last straw that broke the camel’s back was the gruesome killing of 43 rice farmers in Zabarmari community in Jere Local Government Area of Borno State by the Boko Haram insurgents last year. The killing of the rice farmers generated long hours of debate in the both Chambers of the National Assembly and resolutions were reached.

Nevertheless, the debate on the floor of both Chambers saw the Senate, for the third time calling for the sack of the Service Chiefs, while the House of Representatives dared the President and asked him to appear before it to explain why his administration is bent on surrendering the country to the criminals.

The Debate in Senate

The Senate, for the second time on December 1, 2020, asked Buhari to relieve all the service chiefs of their appointment and replace them with new ones with new ideas and solutions. It also called on the President to take immediate steps to restructure and remodel the country’s security architecture and provide enough modern weapons and equipment to effectively combat the insurgents.

The Senate urged Buhari to probe allegations of corruption and leakages within the security agencies and to foster transparency and ensure all resources deployed for security are spent on the needs on the ground.

The Debate in the House of Representatives

Members of the House of Representatives, after long hours of debate, finally resolved to invite the President to appear before them and offer an explanation on the security situation of the country.

Moving a motion earlier, on behalf of other 10 Borno State lawmakers, Hon. Satomi Ahmed, prayed that the President, among other things, should declare a state of emergency on security matters.

But, Hon. Ahmadu Jaha, one of the co-sponsors of the motion raised a point of order saying that a prayer was omitted. Jaha said in the original motion, all the sponsors agreed that Buhari should be invited to brief the House on the true state of the security of the Nation adding that he’s shocked by the removal.

He stressed that he risked his life several times and wants it to be on record and in the hearts of his constituents that he was not silent on the insecurity of the region.

House Speaker, Hon. Femi Gbajabiamila, in an attempt to calm the very rowdy session ruled that the plenary be suspended and members should go into an executive session to resolve the matter.

Reconvening after an hour from the closed door meeting, Hon Jaha from Borno State who earlier insisted on the invitation as the key prayer of the motion, was asked to formally move the motion for the President’s appearance.

On December 2, the Speaker announced that President Buhari has pledged to honour an invitation from the lower chamber of the federal legislature to explain what he is doing about the rising wave of insecurity in the country.

He told State House reporters in Abuja, after leading a delegation to a meeting with the President, that they came to convey the resolution summoning him to appear before it.

Gbajabiamila said aside from conveying the resolution to the President, they also had the intention of fixing a date for his appearance.

He said: “We came to see the president on developments in the country. He was so willing to listen as typical of the president. The usual democrat that he is. What we basically sought was to convey the resolution of the House and to fix a date which we did not fix out of respect for Mr. President and his very tight schedule since we don’t know what date will be convenient.

After the initial assurance given by the President to appear before the legislative arm, the Attorney-General of the Federation and Minister of Justice, Mr. Abubakar Malami (SAN), said the House lacked the power to summon the President.

Despite Malami’s claim, the House insisted that it is empowered by the constitution to summon anybody.

The Green Chamber later decided to foreclose the invitation following the body language of the Presidency, besides the House leadership was alleged to have a hidden agenda on the motion with a view to undermining President Buhari.

A principal officer said: “The House of Representatives has foreclosed or dropped any immediate or future plans to invite President Muhammadu Buhari over insecurity in the country because a harmless motion has become political.

“I can tell you that we will no longer revisit the invitation. But we will be interacting with Service Chiefs and other ministers in charge of the nation’s security.

“We also got intelligence that some of those lawmakers who sponsored the motion because of Zabamari rice farmers went through the back door to the Presidency to apologise over their insistence that the President must appear before the National Assembly.”

But in a swift reaction, the House insisted that it never apologised to the President or Presidency over the motion requesting Buhari to brief the nation on the state of insecurity in the country.

The Spokesperson of the House, Hon. Ben Kalu, in a statement insisted that the President or the Presidency as the case may be, never sought an apology from the House for carrying out its constitutional responsibility to the Nigerian electorate.

He explained that the House never apologised to anyone for exercising her constitutional mandate and the Ninth Assembly of the House under the leadership of Gbajabiamila.

Kalu stated: “It has come to the knowledge of the House that few sections of the media reported that the House apologised to the Presidency over the resolution of the House which arose from the motion sponsored by members from Borno State, requesting for the invitation of the President to brief the nation on the state of insecurity in the country.

“The President or the Presidency as the case may be, never sought an apology from the House of Representatives for carrying out her constitutional responsibility to the Nigerian electorate. Where then did the media get the report that the House as an institution apologized to anyone? Media professionals are advised to uphold the ethics of their profession. For the avoidance of doubt, the House never apologized to anyone for exercising her constitutional mandate.”

Nevertheless, after persistence demands, Buhari decided to inject fresh vigour into efforts by his administration to combat insurgency, banditry and other forms of criminality with the appointment of new service chiefs.

Their appointments followed the resignations and retirements of their predecessors who had come under severe attacks, leading to mounting pressure on the president to drop them, over their perceived inability to tame the nation’s worsening insecurity.

The Presidency also said the new appointments were carried out in a bid to inject fresh ideas into the system.

Adesina shed more light on the appointments while featuring on a television programme last night, saying that the president felt it was the best time to rejig the security system in the country.

“The President knew the time to do it and I believe the time has come and that is why it has been done,” he said.

He faulted claims that their resignations were a result of security failures under their tenure or due to the pressure mounted on the government to sack the service chiefs.

“I don’t think it is a matter of right or wrong,” Adesina said when asked to clarify the situation. It is just a matter of doing what is best for the country at the best time.”

He explained: “It will not be right to say one side was right or one side was wrong because the president even in the statement we issued also commended the outgoing service chiefs for their contributions to engendering a safer country.

“That shows that by and large, he was satisfied with their performances and he just felt it was time to rejig the system; have fresh energy, have fresh blood, have fresh ideas.”

Senate’s reaction to the appointment of new service chiefs

The Senate said the appointments of the new service chiefs was in tandem with its earlier resolutions to replace the service chiefs.

Senate spokesman, Senator Ajibola Basiru, told THISDAY that the change in the service chiefs was in line with two earlier resolutions of the Senate for the nation’s security to be overhauled.

He said: “It is an honourable thing for the CDS and other service chiefs to have resigned and give room for fresh blood and you know that in the past, we had called for the realignment of the security network of the country and the need to inject a new set of leadership into the military.”

The House, since its inauguration, has been clamouring for the replacement of the service chiefs due to their failure to curb the worsening insecurity in the country.

The House, in two previous resolutions, had asked the president to sack the service chiefs if they failed to resign. But their resolutions were ignored by Buhari until last week.

Speaking to THISDAY House spokesman, Hon. Benjamin Kalu, described the appointment of the new service chiefs as a reflection of leadership that listens.

Kalu noted that the coming on board of the new service chiefs was an injection of new energy, which though may not be automatically magical but was still a good step towards combating insecurity.

He said: “For the House of Representatives, it is a reflection of the leadership that listens. On our part, we’ve shown that we pay attention to wishes, desires, hunger and the needs of the Nigerian people. What they actually wanted is what we have carried on our shoulders and presented at the plenary as their representatives.”

While the appointment of the new service chiefs will not dramatically change the nation’s fortunes in its fight against multiple security threats, the President must reduce his distance from defence and security matters, and hold Service Chiefs and senior commanders accountable for successes and failures.